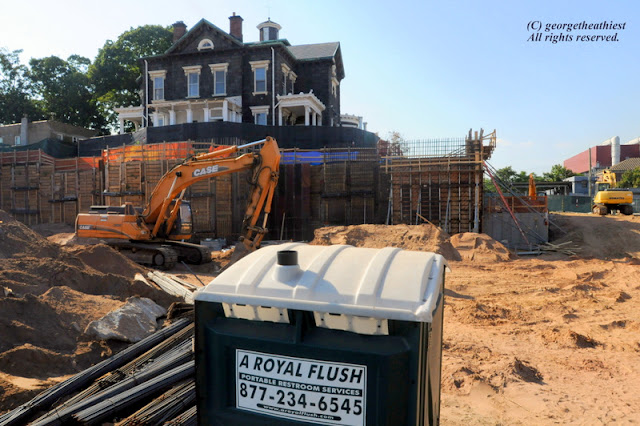 More photos from George the Atheist.
Posted by Queens Crapper at 7:39 AM

Not pictured here is the "ROYAL SCREW" that the local politicians have given to this important piece of Queens' history.
The Steinway mansion and its grounds could have been a great asset for our bereft borough. Instead it got the "Royal Flush".
A world class musical heritage site has been violated.
Buck up people! Offered as a consolation are the Katz concerts. Please....no cat calls, boos, or hisses. Are we not ladies and gentlemen?

Is Melinda Katz taking a dump in that port-a-potty?
Bowery Bay stinks worse than usual. But, then again,the stench of corruption isn't exactly a bed of roses.

And where is the outrage of the Queens Historical Society?
Hidden under a bushel...lest they incur the wrath of borough hall and lose some funding.

The saving grace here is that when the warehouses are completed, the Mansion will still be positioned on that impressive hill. It will still be sitting in its glory elevated above the warehouse roofs, aesthetically and metaphysically "crapping" on them - eternally. Observers will pass by and note throughout the ages the "what-could-have-been" as to the "what-is". The elevated Mansion will be a testimony to the stupidity of the Queens politicians, the Queens architect, the Queens developers, and the Queens catatonic citizenry. That testimony already is playing out visually, would you not agree?

Long live the Steinway Mansion and what it represents!

Absolutely, George!
I could not have put it more eloquently.
An excellent summation of the crappy events here.
Thanks for your photo chronicle.
The Steinway mansion remains king of the hill!

George, you have documented with your photos one of the worst destruction's in Queens history and not one peep from any elected official from this shitty borough or any elected official or power to be period. Looking at photos of what was and the continual destruction is heart-breaking, all due to greed and the most inept politicians around.

At least the violation of the Steinway site is out in the open for all to see.
Since 1986, the interior destruction of the historic Flushing Keith's Theatre
has remaind invisible to most eyes.
This is how Queens regards it's important historic legacies.
"Queens has nothing but land. I intend to develop it".
Purported to have been uttered by the king of corruption, the late borough president Donald Manes.
Borough hall continues to follow his play book.

I remember when the Flushing Theatre was being gutted in the 90s, the city papers were all over the story.

They haven't said a peep about Steinway Mansion. Why?

Please correct me if I'm wrong but wasn't it the primary job of the Greater Astoria Historical Society to generate publicity directed towards the Steinway Mansion? If trying to work with local politicians wasn't working, the only thing to do is make the issue very public.
In the press and in everybody's faces, is they way to go. That was the advice given to me , believe it or not, by a politician.
"Keep it alive"!

Caution! One has to be skillful in maintaining a good working relationship with the media. No bristly or prickly personalities here.

When I was on the board of Queens Historical Society I made sure that there was an exhibit mounted to document what went on at the Keith's. We all worked together and pulled out all of the stops!

I spent months mounting and curating this exhibit, "Movie Palaces of Queens" (which, by the way, featured demolition photos of Astoria's famed "Triboro Theatre").
Thereafter I got QPTV to tape a documentary on the subject.
The final product, entitled "Historic Movie Palaces of Queens" , won a citywide competition and received a CAPA award for the best produced documentary in its class. It was then picked up by "Paramount Cable" in Manhattan. It was running for about two years on QPTV's channel 47, I believe.

I am not trying to toot my own horn...but it seems to me that if you really care....you must try your best and break a real sweat to get your message out there.
The QHS exhibit was immediately covered by "Newsday". It was even followed up by "Backstage, etc. etc. etc.

You are complaining about Steinway not getting the publicity it deserves?
Then get out there and publicize what has transpired like George has done with his photos.
I hope that someday soon, that GAHS will feature George's photos in an exhibit. The press should be invited to the opening.

Remember the post from June 5? Why is it always the fault of the victim? Why are we not hammering on the real culprits?

Besides, with all that you did the Flushing theater was still lost.

But I put up a good fight since 1986. Our committee's involvement dated back to an even earlier date...1980!

Can you say that you pulled your weight? Sometimes the victim IS partially to blame.
If you choose to walk down the same dark politically deserted streets hoping for a miracle at the 11th hour....then I must say that you have been misguided. Yes, the theatre was lost, but not for trying. Steinway, in a way, is also lost.

GAHS is partially to blame. Then there is my own former historical society, QHS. Then there is borough hall. You other's know who you are, so let's not use up too many more words.

The last anonymous poster hails from GAHS, no doubt. Accept your own portion of failure like anyone else...ME included.
Are we not grow ups. Stop making excuses. You could have done more. You could have made more creative use of your time...ALL of you!

If you do not like my honest criticism, which I sign with my name...without hiding under somebody's skirt...tough! I speak truth , not lies.
Enough now! Let my critic post their name...the coward!

"The Flushing theater was still lost". Agreed.
But it made headlines for years.
Steinway? LOL! A 10 decibel peep or two worth of notice.
GAHS used to have this pompous fellow ,
who possessed a fine talent for rubbing the news media the wrong way.
That might have accounted for the
lack of major coverage for Steinway.

You do not even own a hammer's worth of power to hammer down the real culprits.
The problem is that most hysterical societies are made up of eccentric fruit cakes wrapped up in their own egotistical visions.
Money talks and BS walks. Politicians do not give a good damn about what you all think.
They hold the big sledge hammer. You all are just farting into the wind!

I am tired of being on the losing side of historic preservation.
I'd like to be a winner for a change.
Maybe I should switch over and become pro over development.
What are you boys paying these days , for a good anti preservation consultant?
LOL! Bite my tongue!

Why promote Steinway & Sons when this company HASN'T LIFTED A GODDAM FINGER to preserve the mansion?

You'da think Steinway & Sons owner Paulson would have sprung for the 2.6 million selling price. A drop in the bucket for the Queens billionaire. He could have used the last owner Halberian's beautiful swimming pool in the basement.