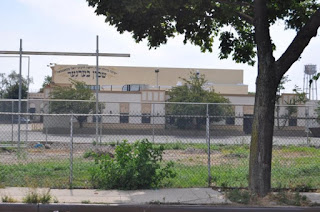 Glendale residents can speak out at next week’s Community Board 5 meeting regarding plans to build additional dormitories and classroom space at the neighborhood’s Yeshiva Godolah Seminary (YGS).

Plans to expand the campus located at 74-10 88th St., the former Monarch knitting mill, will be the focus of a public hearing at the Sept. 9 meeting of CB 5, which will begin at 7 p.m. in the CNL Center at Christ the King Regional High School in Middle Village.

Currently serving 1,050 students within two buildings on the site, the YGS is seeking a Board of Standards and Appeals (BSA) variance to erect an extension and unite the buildings into one, four-story campus. The expansion would result in the creation of 28 new classrooms and 177 dormitory rooms, accommodating approximately 710 dormitory beds.

Abraham Markowitz, YGS building manager, told the Ridgewood Times on Monday the extension will allow more students to reside on campus; currently, the facility offers dormitory rooms accommodating 360 individuals. The remaining pupils are shuttled from their homes in Williamsburg to Glendale each day via school buses that the yeshiva charters.

The additional dormitories would reduce the number of daily school bus trips from 15 to between four and six, Markowitz said. The expansion plans also call for the creation of a second curb cut from 88th Street, which would allow school buses to queue up on the yeshiva grounds rather than along the roadway.

I seem to recall that the school got permission to build so long as there were no dorms on campus. But now the Hasids are admitting that they built them anyway. Why should they now be rewarded with a variance if they were operating illegally this whole time? Why should Glendale residents be bombarded with a school for hundreds of kids from Rockland county and Williamsburg? Two interesting facts: this "building manager" Abraham Markowitz, somehow finagled himself the position of President of the 104th Pct Community Council although he doesn't live in Queens, and the DOB inspected the yeshiva after complaints of illegal occupancy, noted the presence of the dorm and did nothing.

Posted by Queens Crapper at 7:45 AM

They'll get the variance, provided they hire a lawyer or architect with connections with BSA.

If anybody seen how the majority of Hasidic people drive in Williamsburgh, the need for curb cuts would be superfluous.

The people in Glendale better brace themselves because they are going to lose a lot of personal space, for they act with a sense of entitlement. This act of chicanery by the self-appointed president is just veritable proof. And using religion and children to do it. In fact, aren't most of these students old enough for high school?

People, especially people with influence and power, will just swaggerly lie to your face these days, comfortable in the delusion that they will never face the consequences . Will these kinds ever face a microcosm of justice and punishment?

They have the influence - so they can do what they want.

I am tired of isolationist religious groups trying to impose their will and way of life upon communities all around America.
You either follow the law or go someplace slaw where nobody cares if you're breaking it.
Hasids and overly zealous Mulsims....two sides of the same coin.

Another group who thinks that religious freedom gives them the right to break our laws.
No free pass for ANY citizen.

and of course they'll get their way because, God forbid, any one stands up to these degenerates. they strut around with a superiority complex, but cry foul and racism the instant you raise an issue with them. They've already violated the previous orders by putting dorms in in the first place and now they'll get to add more. it doesn't matter what the actual residents of the community want. the Jews want and the Jews get. bus them in from Rockland county and Williamsburg, no one sees that as an issue? they have these "schools" all over the place. let them ship their Jewry to those already established and able to handle the influx. residents of Glendale stand up for you community and let them know you wont allow your community to be taken over by the swarm of Hasids.

The Hassids are doing no more than the Asians are doing so I would cut them some slack. After the appropriate bribes of course. Monarch knitting mills was Jewish owned so Hassids taking over is OK by me and at least 90% are American born unlike the fresh off the boat Chinese/Asians/Bangladeshis/what have you.

Odd. Street closed off with a gate, but google maps shows it a public street.

Very narrow entrance and space for all those people or that traffic.

The people who run the YGS have been trying to get in the good graces of the community by allowing a community garden on their property and donating hot dogs for the Night Out Against Crime. If they were truely good neighbors they would adhere to zoning laws.

and I'm sure they're Hebrew National hot dogs no less.

Hot dogs were Kosher but not Hebrew National

Tell ya one good thing.
If the mayor or somebody tries to ram homeless shelters and urban scum down the neighborhoods throats those Hassids will be first on the front line with axes ready for business. What's good about Hassids is they will fight other Jews (and democrats) to the end when they they are getting screwed.
This wile all the armchair warrior Joe Blow's are sitting home watching ballgames. At the current rate of destruction the mayor and the President are doing Glendale may need these people to survive.
The Hasidim have big $$ to fight, we're talking diamond district, gold, almost all electronic imports etc !!

-just something to stop and think about.

Admiration of hassidim and anti-Semitic. Now that's something you don't see in your average blog.

Also in reply to an earlier reply, when Jews kill 3,000 people by flying jets into buildings, and when Jews kill American citizen in more than 1,000 other documented terrorist incidents, then get back to us about putting Muslims and Jews into the same moral category.

Extremist religions are all in the same category....backward, and potentially beastly.
What about those extremist radical Hasids in Israel who have invaded Palestinian land by building homes there?
If somebody built in your yard, without permission, you would be more than furious.
Extreme Jews ARE as bad as extreme Muslims.
Kosher and Halal...two sides of the same coin.
You just cannot face the facts.
How many thousands of innocent Palestinians have Israelis killed?
I am sure it equals 3,000.
Before you criticize any one group of being butchers, I ask you....is your apron free of blood?
There is no anti Semitism in my remarks only disgust with isolationism.
Excuse me, but the Internet has put us all in the same global village.
Nobody can build a wall around their back yard without it affecting others.
Narrow mindedness is the key to conflict. Learn to respect all of your global and local neighbors.

Why is it that when anyone points a finger at a Jewish person that they are immediately called an anti Semite?
I can understand some of the historical paranoia that comes with being persecuted, but a lot of this might be a disguised form of elitism....of being the "chosen people", perhaps? At any rate it is a knee jerk reaction. No, there are no Nazis hiding under the bed here, folks. Get over it.

Hasids own a lot of the bars down by the Williamsburg bridge that host hipster live music and art events. At the time I leased sound systems and have personally seen these guys (who were all drinking at the bar BTW) instantly join together and distribute some serious ass kicking when some "ebonc urban youth" came into their bar and started messing with them.
--These guys literally left the thugs laying on the sidewalk in pools of blood. They indeed must have some sort of military training. The cops were laughing

Its part of the liberal program. Jews are considered a protected class. Some groups are above criticism, and they are at the top of the list.

They also never attack their own, like how you never see feminists go after how Hasidic women are treated in their own culture, or how its OK to attack the catholic church in a full media blitz whenever there is a story about child molestation (fairly, i might add) but when it happens with a rabbi, it barely registers on the radar. It would be against the gameplan to speak out against another group on your side.

>[Jews] never attack their own

You don't know any Jews, do you.