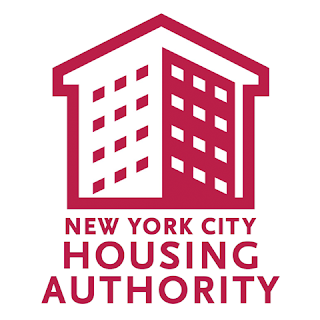 The plan targets two developments — Wyckoff Gardens in Boerum Hill, Brooklyn, and Holmes Towers on the Upper East Side — both in neighborhoods where land is considered “high value.” NYCHA would either sell to or enter into 99-year leases with developers to build more than 1,000 units, half to be affordable and half to rent at market rates.

De Blasio’s mixed-use project is a slightly revamped version of a failed plan by his predecessor, Mayor Michael Bloomberg, who suggested the developments be 80% market rate apartments.

The Bloomberg plan — which specifically targeted eight Manhattan developments — was attacked by tenants who felt they hadn’t been consulted. Many were also concerned it would further exacerbate gentrification in their rapidly changing neighborhoods.
Posted by Queens Crapper at 8:10 AM

Boggles the mind that people would want to pay market rate to live on NYCHA grounds, but if it leads to the dismantling of the whole agency and a removal of people who can't afford NYC expecting people with equal or even lesser income to pay for them to live in NYC, god bless 'em.

That's right....fill in the open spaces in all of the projects so those who live there will have even less in their lives.
De Blasio is a phony liberal, at that. He is owned by REBNY regardless of his wife's color. She is as "White" as he is , when it comes to lusting for position and power. The ....LOL...."First Lady" is a traitor to her own race.

Amenities include bullet-proof windows and armed guard escorts from the lobby to your apartment.

The worst of all worlds: you pay market rate and you get NYCHA as your landlord.

they'll be rent-a-cops, most of which are the dregs of society and welfare recipients to begin with. and they already have their own guns and are the reasons for the bullet proof windows.

Time to give the deeds to the apartments to the current tenants and walk away.

Let the free market take over.

Again folks, who in their right mind thinks a government bueracracy will make nice housing for people? If you can't afford to live in one of the most expensive places in the country why should the government either local or federal help to pay for you to live there? When the government spends someone else's money ( the tax payers) to build "affordable" housing it only causes more people who can't afford to live in the city to show up and demand "affordable " housing.
I really get a kick out of these tenants in government housing complaining that they don't want the housing authority to let "other" people move into "their" projects. I mean with all due respect, these people are sucking at the public tit and they have the balls to complain that they don't want "other " people to live too close to them. They are non productive or under productive tax payer liabilities and have no right to complain about stuff like this. They need to shut up and be grateful for what society's producers have been kind enough to give to them.
The only solution to this shit is to stop building government projects and affordable housing and don't let anyone else move into the existing stock. When all of these dependents die or move away the whole failed social experiment will be over and the existing stock of this crap can be renovated or torn down for people who will pay their own way.

At camel bladder: have you ever read the poem of the mab who didnt speak up when the nazis came for the jews. You send reslly ignorant, "if you cant afford to live in nyc dont live here" sorry everyone cant make 100k a year. How can you talk down on the poor when you yourself are probably middle class. Let the projects get torn down, and kick out the poor, and youll be the next on the chopping block. Tear down the pjs build glass box hugh end condos full of transient hipsters living off daddys money. Then theyll be online just like you saying. Lets turn down all those middle class houses , if you cant afford nyc get out. Nyc needs public housing. The problem is not the pjs, its the 50 percent of people that abise it. The other half need it. We need a affordable place for new yorkers to live. We dont need another queensbridge, we dont need anymore LIC 1 bedroom condos for 4000 a month either.

The problem to begin with was the horrible idea called "urban planning" way back when they built many of these horrible tall housing projects for lower economic people, put tons of units in them and put many in isolated areas which attracted many of the criminal element. The proper way would have been to build much smaller units with little common areas (where much drug dealing took place) and spread them out. Then many of these NYCHA places had no rules or regulations, no proper security, so what did you expect would happen. It was a majorly failed experiment that we are dealing with all of the fall-out to this day.

Well many of the projects started off nice. Such as lefrak city and parkchester. They were built to accomadate wwii veterans coming home from war. The whole purpose of the projects was to live there for 3 years or so save and move out to a nuce home. Then the apartment would go to the next needy family. The people with ambition left. Many others stayed and the apartment stayed in the family for generations. On another note. We need the projects. "Ghetto" people are going to around no matter what. And you cant just ship them off- let them be concentrated in their part of town. If we knock down the pjs they will disperse and flock to our hoods. Then every part of the coty will be bad

Also the US goverment is a taker backer. Even with native Americans. In the 70s natives were goven reperations and land farm out in the desert in the mid west. The land was useless no water or vegetation. Untill oil was discovered. US govt. Takes back land. The nycha is trying to do the same thing. Projects in harlem, near the FDR, LIC, chelsea piers, etc.. were built there because at the time rich people didnt want to live their. Queensbridge was by factories, fdr projects by a highway, chelsea piers was by the fishing docks, roosevelt island had mental ill people. Now the time has moved on and those areas have changed for the better. You cant say "oh rich white peopl deserve to live here now, we give you this land cause we thought it was worthless but we accodentally gave you prime water front centrally located property, please give it back." Tough nuts!

“It’s not an endlessly expanding list of rights – the “right” to education, the “right” to health care, the “right” to food and housing. That’s not freedom, that’s dependency. Those aren’t rights, those are the rations of slavery – hay and a barn for human cattle.” – Alexis de Tocqueville

So you stick the haves right next to the have nots...... Giving predators built in prey. Anyone who would live vthere is a complete moron. Better hire more cops.........and violence interrupters... Hahahahahahahaha

So military veterans,elected officials and every educated person is a slave.

I still just don't get orthodox conservative thinking sometimes,especially in this horrible era of mind-blowing income disparity. The independently wealthy and our robust government don't seem to mind expanding aid for their pet personal charities and proxy wars but when it comes to people in their own country they are just inconsolable whining beggars who need infinite discipline.

As for this latest abomination, the rights of developers, property owners and investors and manipulators of market rate housing and homeless warehousing are solid gold.

Got to seethingly admire our caring mayor, because with this he might fulfill his 200,000 goal by enabling plunder of city government property ahead of schedule.