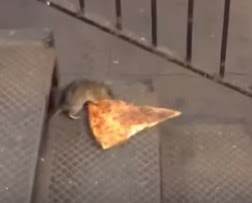 A state comptroller's audit is critical of a Metropolitan Transportation Authority pilot program that removed trash cans from 39 subway stations to reduce garbage and rats.

The report is critical of how the MTA measured the program's success and says there's no clear sign the four-year experiment is working.

The MTA says it disagrees. It says the trash can removal produced less trash, thus leading to a reduction in the rat population at those stations.

It says it will continue the program but has no plans to expand it.
Posted by Queens Crapper at 12:45 AM

Make it illegal to eat on the subway
Ticket people who do
Even if there are people who violate these rules, the trash levels should drop somewhat

Sure, like the subway wasn't crowded enough now people will be coming in just to see the performing rats.

And in true NY fashion, there is money to be made. there's a loser selling plush rats with slices of pizza for $80-100 a pop.

I prefer a Sicilian slice.

Removing the garbage cans in the subway station just resulted in more slobs tossing their refuse onto the tracks and increasing the possibility of track fires. And attracting way more rats. Just what we need. I think they need far more graphic signs depicting track fires and rats on platforms to wake people up. Of course, not all vermin has 4 legs and that sort of vermin will continue to just toss their trash onto the tracks--just like they toss trash on to the floor of their homes.

I also think they should hire more MTA cops for platforms to ticket those who toss trash. The ticket revenues would likely pay for the cops and the increased safety is priceless.

Wait, if they take out the trash cans, where are people supposed to throw their trash? Onto the tracks?

The "artist" was actually featured on Vanishing New York. I can see making a novelty item and selling it, but 80 dollars is preposterous.

But not if you're amongst the Generation Gentrification sect of mouth gaping and breathing frivolous spending hipsters with a sophomoric sense of humor and think irony was defined by alanis moresette, this is a great accessory for the sharing wasteland society.

The artist isn't the loser, the dopes who buy it are.

They actually had a study that states that if you get rid of receptacles,garbage will increase. I wonder if Stringer sarcastically ordered that report.

It is illegal to eat on the subway.

What you get when you invite the entire third world into our civilized society?

The rat is so cute! Just keep him out of my house though!

All the hand-ringing and angst and disgust is just stupid. Ban food on NYC public transit-- like every other city in the world. Write tickets. Arrest violators. Why it's even an issue here is beyond understanding.

If it truly was a success, they would certainly expand it...Their inaction speaks volumes.

I think they should expand the program - to the Upper East and Upper West Sides. The resulting outrage among those with political clout would put an end to this BS once and for all.

Isn't it interesting how they're going to maintain such a supposedly successful program in the relatively less politically powerful neighborhoods where they started it? That is, far away from the wealthiest neighborhoods and heavily touristed areas.

Now, the only way the MTA will discontinue this nonsense is by being forced to do so through political pressure. That is the only way. The MTA can't just put the cans back, claim victory and go home. That would mean they'd have to admit they conducted a flawed study - or deliberately falsified the results. Either way, they'd lose face. No, this BS will continue along the J, M and Z lines until political pressure fueled by public outrage occurs.

So, the comment by Mitchell rings true. If it were such a success, they WOULD be expanding the program.

Again, just try to imagine the level of duplicity, the level of depravity of anyone who could say, out loud and with a straight face, that fewer garbage cans means less garbage.

If you read back to when there was no sanitation in this city prior to the era of the reformers of the late 1800's and early 1900's, you'll find the establishment at the time made similar claims.

The person who came up with this absurd idea at the MTA is trying to take this city back to an unenlightened time - and needs to be fired.