There’s a nauseating mess in a popular Queens park.

Trucks have been spotted pouring a whole lot of waste but the more shocking discovery is who’s behind it all.

Chunky, murky sludge gushing at full speed directly into one of the most beloved parks in Queens.

“Smells like a sewer,” one resident said. It’s creating a soggy, muddy cesspool of bugs, trash, and who knows what else on a strip of land in Forest Park near Union Turnpike and Myrtle Avenue.

No word from Mitchell Silver about this, not only would he not allow this in Central Park or Prospect Park, but exactly what parks this waste is coming from (maybe this shit is coming from Flushing Meadows with the U.S. Open going on)?  And to our idiot mayor, doesn't Forest Park factor in your version of the Green New Deal?

The location is the same section of Forest Park where the agency plans to create a new entrance where parkgoers from nearby Glendale can enter from Myrtle Avenue to other sections that will also soon be revamped.

“This is not hazardous waste. These trucks were used to clear soil and sediment from our clogged catch basins and spray shower drains to prevent puddling. Fresh water from the holding tanks is used to flush the sediment,” spokeswoman Meghan Lalor said. “Any large debris will be addressed this evening and then we will follow up by raking the sediment with machinery to address anything remaining.”

The dumping occurred near the northeast corner of the park where people are able to enter from Myrtle Avenue. The Parks Department has been looking to revamp the area which mostly serves as a route for motorists get on the Jackie Robinson Parkway.

But the scene was alarming for multiple people in videos captured as the smell was bad, according to those in the video, and garbage such as water bottles and wrappers could be seen.

“The smell of the discharge was abhorrent. There were gallons and gallons of muck, mud, debris and heavens know what else,” said Frank Schorn, who captured the videos. “The liquid flowed into a sewer entrance some dozens of yards away. The sewer grate is nearly completely blocked with debris from prior discharges of waste.”

The truck has Jersey plates. The city hired a private carting company to dump that shit.
Posted by JQ LLC at 6:45 AM 13 comments: 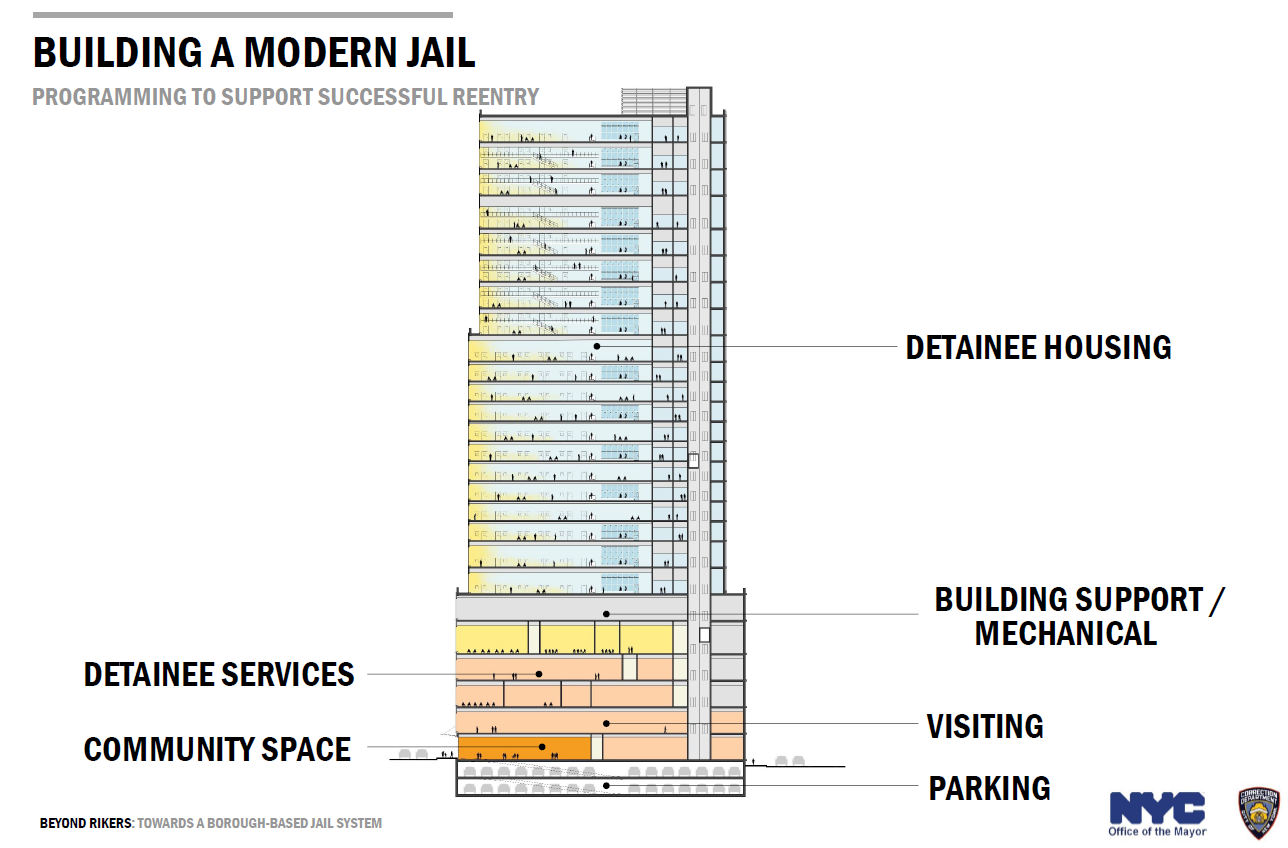 Advocates and opponents of the city’s plan to close Rikers Island and build four new jails will pack City Hall for the council’s public hearing on the proposal Sept. 5. That’s also the first day of public school for hundreds of thousands of New York City students, and stakeholders say the hearing date could pose a big obstacle to community engagement.

The hearing will take place during a scheduled meeting of the Subcommittee on Landmarks, Public Siting and Maritime Uses. A City Council spokesperson told the Eagle that it is expected to be the only hearing on the topic.

“Since the issue of closing Rikers and opening ‘borough-based’ jails is one of the most controversial issues of our time, I’m expecting a very crowded hearing, a very passionate hearing,” said Councilmember Adrienne Adams, the subcommittee’s chair.

“Most importantly, the people who are impacted one way or the other by the city’s jails need to be heard,” Adams continued. “I still believe the communities should have a voice in the decision.”
Some community members and activists say setting the hearing for the first day of school is the latest maneuver to reduce community input in a process that opponents have criticized for lacking transparency.

“Why would you push the calendar for that week with that schedule?” said Justin Pollock, a resident of Boerum Hill who lives near the site of the proposed 395-foot facility in Brooklyn. “It adds to the disrespect that this process has had for the general public.”

No New Jails organizer Kei Williams, a jail plan opponent, said the “monumental decision” before the council necessitates multiple public hearings on dates that are more convenient than the hectic first day of school.

The council hearing will also take place just two days after the City Planning Commission casts its binding vote on the plan Sept. 3, the deadline established by the city’s Universal Land Use Review Procedure, or ULURP. If the CPC votes against the land-use application, it would not proceed to the council, but that is considered unlikely.

The city’s plan calls for building a new 1,150-bed jail in every borough except Staten Island by 2026, and depends on the city’s ability to reduce the jail population to 4,000 detainees from a current total of roughly 6,500.

The CPC can make modifications to the plan, such as permitting smaller facilities with fewer beds. That means the version that reaches the council could differ from the plan put forth by the city. But the final decisions rest with the council, meaning any changes made to the proposal by CPC could be reversed in the final stage of the land use process.

Williams said the tight time frame could make it difficult to evaluate the impact of any new changes.

“The one public hearing is scheduled … before the public will have had a chance to digest the Planning Commission's vote or comment on further changes to this ever-evolving plan that the City Council will not vote on until October,” Williams said.

Supporters of the city jail plan say community members will find a way to have their voices heard, even if the hearing date seems inconvenient.

The only way for communities in the targeted areas for these jails can attend is to keep their kids home with a boycott of the first day of school, then show up to this hearing and disrupt this stupid plan.


Just a dozen days after Amazon announced this winter that it would pull out of plans for a Queens headquarters in the face of raucous opposition, the local authority that had helped forge the deal sought help from a familiar face, emails obtained by THE CITY show.

Andrea Hagelgans, the de Blasio admininistration’s former communications chief, got a message from the NYC Economic Development Corporation chief of staff James Katz on Feb. 26 requesting a phone call about a “potential engagement.”

That engagement — cemented in April at $80,000 for four months’ work — was a reputational rescue led by Hagelgans at the public relations firm Edelman, which she’d joined in 2018 after leaving her City Hall job.

Her team signed up to lead a course correction in Amazon’s aftermath, the correspondence shows. It would enhance EDC’s existing press operation, rehabilitate the corporation’s wounded image and win future land-use fights against community and political opponents.

EDC spokeswoman Stephanie Báez characterized the hiring of Edelman as nothing out of the ordinary. “EDC carries out dozens of complicated projects that require time and attention,” she said.

“As in the past, we’ve taken the straightforward step of engaging outside help to assist with capacity and strategic support.”

She did not answer questions about total billing, whether the contract would be extended or renewed or if the work was ongoing.

The Edelman proposal from March, released to THE CITY under a Freedom of Information request, describes EDC’s “most urgent needs” as “capacity building and the preparations needed to weather and win critical land use fights.”

“We have designed a program that we believe meets your immediate needs while propelling NYCEDC forward as you work to shape the future of NYC for its residents,” Hagelgans wrote in an email to Katz.

The objectives included positioning Patchett “as a fierce advocate for business growth and development,” and creating a “playbook outlining a strong defense to political or community-related attacks surrounding high-profile land use fights and other reputation risks.”

The strategy involved a “systematic, rapid-response approach to effectively navigate political and community-related opposition that could slow or stall progress” on such deals.