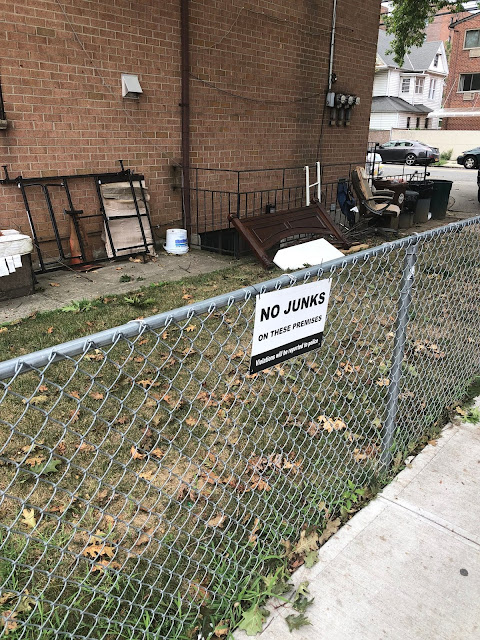 This is a property I pass by everyday that is adjacent to the LIRR Murray Hill station. This pictures depicts a thousand words, as they have this poor written sign yet their entire yard is dumped by the tenant.

Hopefully this can be published on your blog.

Junk (Portuguese junco; Dutch jonk; and Spanish junco) sails have full-length battens which keep the sail flatter than ideal in all wind conditions. Classic junks were built of softwoods with the outside shape built first. Then multiple internal compartment/bulkheads accessed by separate hatches and ladders, reminiscent of the interior structure of bamboo, were built in. Traditionally, the hull has a horseshoe-shaped stern supporting a high poop deck. The bottom is flat in a river junk with no keel , so that the boat relies on a very large rudder to prevent the boat from slipping sideways in the water. Ocean-going junks have a curved hull in section with a large amount of tumblehome in the topsides.

Actually, the sign refers to Chinese "junks", or sailing vessels. As you can see, there are no junks in this photo of the premises, so the sign is working.

Disgusting. It's the tenants, but bad management also.

So I guess the vocabulary of this exempts the owner, or tenant to not clean their yard from "JUNK"

Ironic that back in the day, people made fun and comments about third world countries, but today, that is what the USA is turning into and NYC is at the top of that heap: HUGE inequality between rich and poor, no middle class, stagnant wages, people working two or three jobs at low pay, filthy with garbage everywhere, sub par housing, overcrowded, bad infrastructure, crime, etc, etc.

This country needs to get back to MAKING THINGS and putting people to work with good paying jobs as opposed to turning former manufacturing buildings into "luxury" condos/apartments that are out of the reach of the majority. Sure products made here in this country would cost more, but then people working would made a good living wage to afford it, like back in the days. This is a pretty simple concept that seems to go out the window.

Between all the "JUNK" and all the Jet Noise from NextGen living in Flushing and the Bowne Park area really sucks now.

Argentina was a first world country before Juan Peron. So was the USA before Trump.