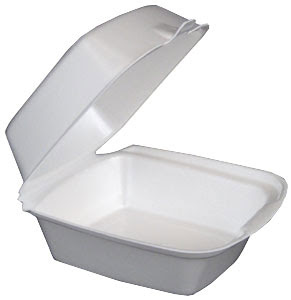 A state judge has overturned New York City's ban on plastic foam containers, finding the nearly 30,000 tons of dirty meat trays and to-go cups now sent to landfills can be recycled in a cost-effective way, according to a decision made public Tuesday.

The ban went into effect July 1 after lawmakers voted in 2013 to approve it unless a yearlong inquiry found the foam could be effectively recycled. An industry group of manufacturers, recyclers and restaurant-owners then sued, arguing that the ban was based on politics, not policy and that recycling was feasible.

The environmental initiative was spearheaded by former Mayor Michael Bloomberg, an independent, and supported by current Mayor Bill de Blasio, a Democrat.

But state Supreme Court Judge Margaret Chan ruled that Department of Sanitation Commissioner Katheryn Garcia didn't properly take into account industry estimates of the market and recycling opportunities generated during the yearlong review period when she decided that plastic foam couldn't be recycled economically and in an environmentally friendly way.

Ms. Garcia didn't "clearly state the basis of her conclusions when the evidence contrary to her findings were clearly before her," Ms. Chan wrote, noting industry estimates that 21 companies would buy used containers from the city. She also noted the city would save $400,000 annually if 40 percent of its wasted plastic foam wasn't sent to landfills, though as much as 75 percent could be recycled following machinery improvements.
Posted by Queens Crapper at 8:24 AM

Let's investigate which special interest group this judge is really working for.

No surprise here. It was destined to fail-- just like the soda ban and a dozen other challenges to freedom of commerce.

Good.
What's the difference.
Now we're back to plastic and aluminum containers that ruin the environment if it weren't for recycling.
Recycle styrofoam and we're OK.

Just the government trying to rule and regulate every minutia, and aspect of your life, carefully and systematically chipping away at every bit of our liberty and freedom.

The Federal Government regulates how much water we can use to flush and shower with. Notice there is a plunger next to every new toilet?
We spent thousands of years evolving, no longer crapping in the woods or a stinking pot in a closet. John Crapper came up with a way to eliminate waste in a sanitary way, and now the government has regulated it to dysfunctional state.
Numerous regulations exist just on toilet seats.

They regulate what kind of light bulbs we can use, So we have to use a more expensive mercury laden Chinese bulb that is supposed to last longer (but doesn't cause its crap). If you break it, call in the HAZMAT team! So the resources expended on this bulb greatly exceed the savings when the bulb is in closets and attics that get used but once or twice a year. Where is the choice?

The energy consumption of appliances is regulated. But they don't tell you the total energy used is is closer to the same BUT it takes three times as long, and making your life much more difficult.

Oh my, the government got involved with whatever I drive. Mandated gas mileage. You know how to make vehicles more efficient? Less weight - thinner, weaker metal so the car or truck folds up like a cheap camera and is totaled in a fender bender. This is progress. Watch the lives to be lost in the future as these cars are made lighter and lighter. Congress has a bill that would require every automotive vehicle to have a black box device (like what is in airplanes). they can then see where you have been, how fast you drove, if you were wearing your seatbelt, etc... then email you your tickets, and road use taxes. It will not realy be your car anymore it will be our protector - the government.

What type of windows, doors & building products you can buy is regulated. No one can figure out the ever changing building regulations.

Parents have no choice in the school their child attends.
The mere mention of anything related to God or religion is taboo in school
BUT, the children are taught how to put condoms on cucumbers.

The heavy hand of government is felt in elementary schools where student’s lunches are confiscated and children are forced to eat a special diet prepared by Michelle.

The EPA can now regulate a puddle in your back yard since they now have dominion over ALL water.

In the latest great loss of liberty, our government has fundamentally altered the relationship with the citizen by forcing citizens to enter into a contract for a product against their will. That is the individual mandate in the Obamacare law. Every 86 year old woman needs infertility insurance - I guess it makes sense to someone.

A government that regulates every aspect of its citizens' lives is called a...


First they came for the Smokers, and I did not speak out—
Because I was not a Smoker.

Then they came for the soda drinkers, and I did not speak out—
Because I do not like soda.

Then they came for the farmers, and I did not speak out—
Because I was not a farmer.

Then they came for me—and there was no one left to speak for me.

stop the legislation by a single govt figure and you wont have to worry about things being over turned. Wanted to stop selling Styrofoam? then go through the city council and pass a law. DO NOT think you can keep by passing the system by having the health dept say sugar is bad so ban it through some non-sense process. Then you have the sanitation dept say Styrofoam is bad; so ban it. This does not work nor should it.

I can't stand the new cups that Dunkin Donuts is using - bring back the styrofoam!

why?
5 UN-elected unaccountable judges decided to make a law saying that any two people can marry.
totally threw out all the laws in all fity states
the libs love the court until it decides something they dont like and is constitutional
the correct decision should have been
nothing we find in the constitution, so it is a 10th amendment state issue

We are shutting down all coal fired power plants because the bureaucrats at the EPA determined that CO2 is harmful.

If it is so bad we should outlaw politicians from speaking. They spew more pollution from their mouths than any old furnace...

If only the country were shutting down all coal fired power plants!

NYC and the entire East Coast has to breathe in dirty air just so midwestern states can save some money.