Asia will soon send more immigrants here than the Americas 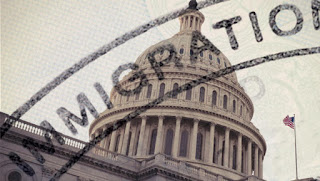 In a major shift in immigration patterns over the next 50 years, Asians will have surged past Hispanics to become the largest group of immigrants heading to the United States, according to estimates in a new immigration study.

The study looks in detail at what will happen by 2065, but the actual tipping point comes in 2055.

An increase in Asian and Hispanic immigration also will drive U.S. population growth, with foreign-born residents expected to make up 18 percent of the country's projected 441 million people in 50 years, the Pew Research Center said in a report being released Monday. This will be a record, higher than the nearly 15 percent during the late 19th century and early 20th century wave of immigration from Europe.

Today, immigrants make up 14 percent of the population, an increase from 5 percent in 1965.

The actual change is expected to come in 2055, when Asians will become the largest immigrant group at 36 percent, compared with Hispanics at 34 percent. White immigrants to America, 80 percent back in 1965, will hover somewhere between 18 and 20 percent with black immigrants in the 8 percent to 9 percent range, the study said.

Currently, 47 percent of immigrants living in the United States are Hispanic, but by 2065 that number will have dropped to 31 percent. Asians currently make up 26 percent of the immigrant population but in 50 years that percentage is expected to increase to 38 percent.
Posted by Queens Crapper at 7:51 AM

The operative word is "legal".

If we cannot house people here, or they are playing crazy rent, why is the Democratic Machine making NYC an open door destination for hordes of illegal immigrants?

Can we start to hound 'Honest Joe' Crowley about this?

if you're talking chinese immigrants, and legalization meaning buying it for 500 large.

Will all they be coming to Queens?

If building a wall on the US border is impossible, as the critics say, can we at least try one around NYC?

What kind of Asian? There's a big difference.... I cannot form a good opinion without this info.

I have a feeling building a wall will not do it.
Sounds like state sponsored immigration, they are running out of land, air, resources so now they come here.
Properties in Queens are being advertised in Asian newspapers, seen them this Saturday taking pictures of various properties in Flushing.
All cash paid for houses will follow, ugly McMansions, congested living, driving so they will feel right at home!
Not to mention trees will be cut down, these people don't like trees.
BTW how much is the fine today for removing a city tree? 15 grand? plus 1 year in jail?
Just asking.


All the racist assholes in this blog can help Trump to build a big ass wall between oceans to stop the ships that bring Asians in containers to our ports besides building the wall between North and Central America (because Mexico is a North American country) in this America (yes ignorant dick heads, the continent not the "country" as so badly everybody including the president and the pope calls the US).

Queens is full of diversity and that makes this county great. What's wrong with Chinese women coming to the US to have their babies and then go back to where they came from leaving you and me with the hospital bill? At least, Latino women stay here and work hard to give their children a better education.

Don't forget that the US and the USSR fought their little dirty wars in Latin American countries back in the 60's, 70's and 80's leaving thousands of well trained and armed guerrillas and soldiers when the cold war ended.

"If we cannot house people here, or they are playing crazy rent, why is the Democratic Machine making NYC an open door destination for hordes of illegal immigrants?"

Because the Democratic machine is just the flipside of the Republican machine which does the same exact thing.

Jamaican workers in the South Florida cane fields, Mexican slaughterhouse workers in the West and Africans in the Alaskan fish processing industry weren't brought in by any Democratic machine.

A sociological observation: the one nice thing about Asians is they don't blast Salsa and Merengue at all hours of the day as the Hispanics are want to do in my vicinity. ("Aieeee, Carita. Mucho caliente!!")

Jamaican workers in the South Florida cane fields, Mexican slaughterhouse workers in the West and Africans in the Alaskan fish processing industry weren't brought in by any Democratic machine.
--
There is no housing shortage in those areas like in New York. How many people are being displaced in Nebraska or Iowa because they can no longer compete for an artificially inflated demand housing?

We already have more people than we have jobs, housing, trains and roads. Why the hell do we need to take in immigrants now? We cannot be the promised land for every backwards country. How about they stay where they are and work to improve the country they come from. If we need more people in the future we'll let you know. Global Citizens my ass!

Just when you thought it couldn't get much worse:

"On the same day Pope Francis called for the acceptance of immigrants, a group of 18 mayors from across the country, including New York City Mayor Bill de Blasio, Los Angeles Mayor Eric Garcetti, Chicago Mayor Rahm Emanuel, Baltimore Mayor Stephanie Rawlings-Blake, and others have joined forces to call on President Obama to welcome additional refugees beyond the number his administration has agreed to accept."

"The mayors who have signed today’s letter to President Obama are part of Cities United For Immigration Action, a coalition of nearly 100 cities and counties that is leading the effort to promote and execute immigration reforms nationwide."

“New York has always been a place where the American Dream has come to life for generations of immigrants from around the globe. For the thousands of Syrian refugees fleeing the nightmare of oppression, in search of safety, stability, and salvation, we say welcome. As the Pope visits New York this week, we are reminded that the answer to the age-old question, ‘am I my brothers keeper’ must be a resounding yes if we are to live up to the values on which our nation was founded and our future depends,” said New York City Mayor Bill de Blasio.

I GUESS WE DO NOT HAVE ENOUGH PEOPLE IN OUR HOMELESS SYSTEM!
LETS IMPORT LOTS MORE...

Asians have destroyed Flushing. They're not very nice people, they litter AND they CUT DOWN ALL TYHE TREES!!!

Glad to have left!

Both could groups could care less what America is all about. They are here for the money and nothing else. For them America is an economic zone of convenience. And if they are scammers and thieves they can always scoot back to their homelands before they get jailed. The homeland where they have been depositing the money they skimmed and scammed.

Anonymous said...
ASIANS IMMIGRANTS MEANS MOSTLY
1- China (could give f all what America is about)
2- India-Pakistan-Bengladesh (lots of Muslims)

1 - They come with truckloads of cash. The claim is they very good business people.
Not sure what kind of LEGAL businesses they have that that much cash.
Clearly a state sponsored invasion.

2- These are H1B visa recipients, clearly replacing the native population at the
workplace. Business sponsored invasion, they work long hours, weekends, no OT,
half the pay, heck even the meter maids are mostly from these countries.
In the old days we outsourced, now we insource. Them.

Yep....more cheap labor.
At least Asians are more "well behaved" than most Hispanics.

There's a whole new class of immigrants, and the rest of the United States should visit Queens to see how this all plays out in the next 10 to 20 to 30 years.

The rapid flood of immigrants legal and illegal into Queens overwhelms the infrastructure. These immigrant groups have been and are going to be resistant to assimilation. Some may welcome the idea of the "end of America" coming to Queens, but I don't. The kids in school are learning English, but the adults can create and do create Little Manila, Little Mexico City, Little Shanghai, Little Mumbai, etc. There's nothing about the United States they need but its economic opportunity and they want nothing to do with its traditions, history, and culture. The bizarre amplification of multiculturalism at all levels is crowding out the experience of becoming American as my parents did and created a community in which they interacted with people of all ethnicities because they could speak a common language and share common concerns. It sounds quaint, but in the Queens of my parents, the immigrants knew and recited the Pledge of Allegiance with devotion to the idea of America represented in that flag.

What we are going to wind up with is a lot of small groups in competition with each other and unable to talk to each other having an address in common but not a country in common.

What about the EB-5 investors? Our own government gives green cards out to wealthy Asian investors as an incentive for investing in American owned businesses that are more often than not owned by Chinese Americans. Half the stuff going up in downtown Flushing is being financed by EB-5 regional centers. These people get promised social security an American universities for their kids, and most don't even come and leave here. They get their green cards, take their benefits and contribute nothing to our communities. It is a disgrace.

They should have a program set up that sends immigrants to different places just so they won't all have to crowd up nyc and California. Let other states feel some of our shitty "diversity".

"Let other states feel some of our shitty "diversity"."
Yes we can export them !

you guys are so stupid and racist.

Only the immigrant stays in the freaking urban areas.

The asians whose been here long enough is also getting out or going to places where it's not that crowded because they assimilated. It's only the immigrants who doesn't know americas culture.

Look at california.. cupertino is 60% asian now because they all focus on good school district and they all work for apple and high tech companies. But they place is still nice because they assimilated.

Ghetto places are where the immigrants go to. Now if that immigrant is wealthy as many of them are, they will not go to the ghetto place, but places where the school district is the best or where places are expensive because they can afford it.