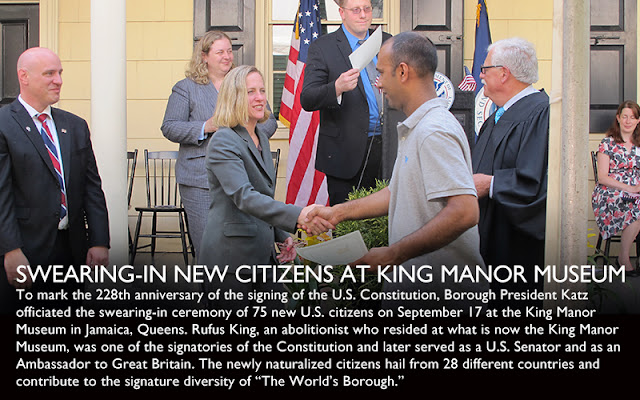 Check out this Katz propaganda from her latest Weekly Update from Queens Borough Hall. "Officiating" at the swearing-in of new citizens at King Manor on 9/17. See photo above.

She gratuitously left out the names of 5 people behind her, left to right:

4. Judge Eric Vitaliano, US Federal Court, Eastern District, who administered the Oath of Allegiance to the new citizens and stood shoulder-to-shoulder with Katz in handing out the certificates of naturalization..

Katz mentioned the same old same old about the diversity of Queens. She told the gathering of her Ukrainian roots and the highlight of her Keynote Address was her mentioning that she was 50 years old and how hard it was to deliver her 4-year old son. "I'll never go through that again!" - anonymous
Posted by Queens Crapper at 12:33 AM

A vile viper and vixen. Intimating that she alone single-handedly swore-in the new citizens when she did nothing of the sort. Her role was to befoul the dais with her presence and to prattle on about the diversity of the denizens despite the new citizens's having just recited this line from the Pledge of Allegiance: "One Nation indivisible."

Why is it so important the Queens be so diverse? Why?

I live in Manhattan and can tell you that the politicians are usually bit players at events - the host organization, or event guest takes center stage.

The politicians in Queens must be very unsure of themselves to continuously hog center stage.

And yes, her shameless use of her 'offspring' is not only nauseatingly cloying but also a callous and calculating use of children as stage set pieces.

Is she imitating Hillary wearing signature pants suits?
Katz is looking more and more like a hard line dyke as time passes.
She wouldn't even let Curtis do it the old fashioned way , preferring a test tube instead.
Sort of makes you wonder who the hell we elected.

Also typical of Katz and other pols---to think that the ceremony is about them-not the new citizens, not the officials swearing in the citizens etc. "Look at me! I'm here!"

What no Curtis? He was with her at HER CONCERT in Forest Park. Have also seen him coming home at night. More BS?

Curtis, it's still dripping down my leg said...

Hey what's with my flunky, the photographer? You left in the people at the extremities. Next time crop tighter focusing on me.

People lets go beyond the sophomoric comments - the point is that everytime anything is to be said in Queens a small clique of self appointed get all the press, lights, and sound. Its tiring when you see them, tiring when you hear them, and getting more than old when you see so many of them getting arrested.

It about time they move over and give us a little light.

Must be something in the water at Borough Hall.

This is how far we've fallen when this filthy skank is our borough president:
In another July 2010 message, Katz castigates Sliwa for not calling her even though her sheets were “still…wet” and she “still [had him] dripping out of me.”

....and we are so diverse...and we speak 468 languages, and we need to be all inclusive.... Yeah. Keep driving the white population out of Queens. All for a GD vote. Pure crap!

You should have heard the developers' slut at the BFHA meeting.....pimping "diversity" and Queens being the "world's borough".
It should have been called the 3rd world's dumping ground

The more stupid comments the pols tell their hacks to post on a thread the more you know they view it as a threat.

WE ARE TIRED OF SEEING EVERY FREKIN' EVENT IN QUEENS WITH THE SAME TINY CLIQUE SMIRKING BACK AT US.

Anyone get that vomitous piece of e-mail from JR Nocerino regarding a fundraiser. Amazing how she gets the FHYAA and FHLL to shill for her.

The rate things are going, Donald Trump will be the next mayor.

He's looking to get a job in her administration.

I prefer Trump to De Blasio.

Why is it so important for Queens to be diverse?
Because it has no other image to sell.
There is a lot of underutilized land here to be filled up with 3rd world peasants.
And, in the process, a lot of deveoper's get rich building brick boxes to house them.
The, of course, these developers can buy more politicians like alley Katz....the developers' courtesan.

She would bed down with anybody who pays her enough.
"Do you require a happy ending to your massage, Mr. Developer?
I am at your service".

the whole "diversity" thing is to keep us distracted from the big picture
read saul alinsky
we keep fighting and the politician do what they want cause we are too busy fighting among ourselves.
working well for the pres
he fundamentally changed the country AND got reelected
now he is going hog wild with exec orders & God knows what