Throw the bums out! 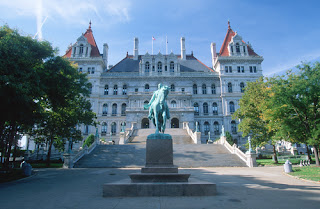 A Gallup Poll released Friday found that three-quarters of Americans believe government corruption is widespread. That’s up by 9 percentage points since 2009, when only 66 percent of American adults said that federal, state and local officials were not to be trusted.

The results mirror New Yorkers’ attitudes about Albany in a new Quinnipiac University poll. A majority of voters in the state — 56 percent — say they want to throw all elected state official out of office so untainted lawmakers can take over.

What country can preserve it's liberties if their rulers are not warned from time to time that their people preserve the spirit of resistance? ... The tree of liberty must be refreshed from time to time with the blood of patriots & tyrants. it is it's natural manure.
Thomas Jefferson

And since she was such an accomplished Senator and Secretary of State, NYS will vote overwhelmingly for Clinton as President.

My old uncle always said vote for the new candidate instead of the incumbent, it takes them awhile to set up their graft. He was a wise man.

the American revolution is in jeopardy when it's leaders find they can bribe the people with their own money... de Toqueville

Again, and again, and again. And a lot of you QC readers are guilty of it with political party loyalty. Newsflash: big money donates to both sides. A campaign contribution has the best ROI on the dollar. Stop relying on the news outlet circus and the campaign platforms, and start reading the financial disclosure reports! Yeah, it's BORING. It's also the unvarnished truth. But the responsibility can't fall on the Crapper alone and his contributors, so get off your lazy tush and start spreading the word yourself:

Mr. Dadey, of the good government group, said the announcement on Friday effectively cut out voters from the process of choosing Mr. Johnson’s replacement. “This prevents any kind of meaningful discussion during a campaign about what the Bronx D.A. should focus on,” he said. “Corruption will continue in the Bronx.”

no choice in the BRonx.

Every pol says: I myself am good, it's the others that are bad.

Everyone wants to throw everyone else's bums out.

After all, they all put their district ahead of the general good.

Not their guy, though. He really brings home the bacon!

I have no party loyalty.

I believe in looking closely at accomplishments, track record and the prior misdeeds.

I quite often consider a write in ballot of "none of the above", it always is a choice of the lesser EVIL!

Most importantly Democracy is incompatible with illiteracy, being uninformed and stupidity.

What do you think you get when you bring in millions of people who do not speak English, barely have a 6th grade education, and are sold a bill of goods from a complicit media. Along with the distractions of Kim Kardashian's ass and one frigin' lion...

Focus on campaign contributions and voting record on actual legislation. It's the basic input/output, and two of the few things things they can't hide. Everything else is stupid theatrics.

What is needed is getting that hick town Albany and the rest of Upstate NY out of New York City government.

We are nothing more than a cash-cow for those upstate fiefdoms of locals...who actually hate us.

So I went to http://www.elections.ny.gov/ContributionSearchA.html and typed in "Paul Vallone", clicked the link for "Friends of Paul Vallone" and found the following big money donors among the locals forking over a few bucks:

SIRULNICK, AARON T
NEW YORK, NY 10128 - This guy is the head of RSA, a real estate group "exclusively dedicated to protecting and serving the interests of the residential housing industry - http://rsanyc.net/rsa-board-elects-aaron-sirulnick-as-new-chairman.html - $2,750

I also went to http://www.elections.ny.gov/ContributionSearchA.html to look up Liz Crowley and what a surprise, all her big money came construction companies and unions. Everyone should be on this site before voting.

They can't use their heads to learn, so they just bang walls and stuff in construction. They need unions because feudal casuists are too dumb to think for themselves.

We hear from them once every four years, with a few lame mailed pamphlets thrown in between.