Yet another bright idea! 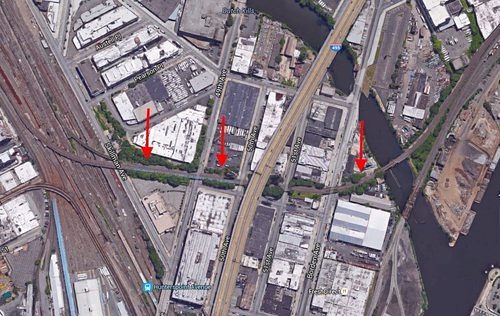 The New York Post reports that the MTA is seeking to revamp a section of disused railroad tracks in Long Island City, and has asking for community input on a park that could look somewhat similar to the High Line.

An MTA spokesman confirmed that the agency has released a Request For Expressions of Interest (RFEI) for the area as it explores all the options of what to do with this parcel of land. When this short stretch of railway, which the MTA calls the Montauk Cutoff, was in use, it "connect[ed] the LIRR's Lower Montauk Branch, which runs along the Newtown Creek, to the Sunnyside and Arch Street Yards to the north," according to the RFEI. But since the Cutoff isn't being used by the MTA anymore, they want to find a way to reuse it:


Specifically, the MTA is seeking expressions of interest from businesses, nonprofits, community groups, and individuals with innovative adaptive reuse concepts, and detailed implementation and operating plans for those concepts. These concepts can include, but are not limited to, public open space, urban farming, or museum or sculpture garden space.


But there are some conditions for groups who want to submit plans; namely, they must be able to provide access points for any plans that include public space; they must plan to bring utilities, like electricity and water, to the site; and they must plan for site maintenance. It's obviously too early to tell what may come of this RFEI, but there's no arguing that a park could be a boon for the area. Mitch Waxman, a neighborhood activist who leads tours of the nearby Newtown Creek, told the Post, "This could be a magnificent bit of green infrastructure."

Why would you want an elevated park among polluting factories? (Unless you plan to convert the land into condos and want a draw to make idiot yuppies spend millions to live there?)
Posted by Queens Crapper at 7:32 AM

So, you think the City can pull this off for less than $100 million of your TAXES?

Just what we need an isolated desolate "park" where the scum of the earth can prey on innocent helpless victims.

Ahhhh, there will be an outcry for more enforcement, taking the overburdened NYPD from other critical tasks.

The unintended consequences of government...

maybe they are planning homeless shelters in the factories

Isn't that part of the line Crowley want's to use for "Light rail"???

Strange how the politicians try to give away parklands (FMP) while other branches want to make parkland out of train routes that might be viable for commuters in the future. This is planning?

The NTA (neglectful transit authority) are going mad, especially since the 34th and hudson stop is not getting the amount of commuters they expected on top of the escalator breaking down the day of the debut (who wants to bet that it will become a makeshift homeless shelter soon, wait for the NY post stories in December). They must have got this cockamamie idea for this real estate scheme because of the atrocious elevated tourist cesspool highline park that starts a block away from that waste of space transit hub.

And why not put it out there for estimates, because all these big spending ignorant developers are fucking idiots blinded by the dollar signs in their eyeballs as well as the mouth-breathing city planners under our duplicitous mayor. Who needs infrastructure improvements when all the frivolous spending dopes want to look at pretty skylines and ersatz parks from their balconies and 20 ft. glass windows.

The funniest thing is they are proposing what seems like a community effort, like all these greedy developers, real estate moguls, shady non-profits, our bailed out banks and the walking dead phone screen swiping hipshits of Generation Gentrification will actually contribute a pittance what the city and state have been giving them on silver platter, no make that a golden trough in the past 7 years. But this must be what Pendergast means when he wants the city to put another billion in the NTA's coffers, because that will be the only way it get's started and why not take from those who will never visit it.

Well fuck this idea. These pigfuckers have enough places to play around in this town and have made enough fucking money.

And a postscript: these people don't care if the place is polluted and toxic, even the aristocrats in the New Yorker is sick of this shit...


and fuck Eli Manning, another idiot with too much money

Won't this preclude the idea that the Lower Montauk could be used again with a connection to the new Grand Central LIRR station, and reopening stops in Ridgewood, Glendale and Richmond Hill? Wouldn't it be nice if that $18 billion (!) they're spending actually did something for residents of Queens?

It looks like they're talking about the tracks from the Lower Montauk line to the sunnyside rail yard. Crowley's light rail could just as easily go to Long Island City instead, using the other little bridge in the picture. These tracks were not going to be used to go to Grand Central. Years ago the MTA considered it, but threw out the idea of connecting the Lower Montauk to the 63rd street tunnel because they would have needed a new billion dollar tunnel through Queens to connect the two, and the benefits would have been pretty minimal.

BTW, in the picture curbed uses east is up, not to the right.

how can they open Ridgewood, Glendale and Richmond Hill stops?
the system is already overloaded from the stinking long island garbage cars!!!

Much of the viaduct over the active tracks in the yard would need to be completely rebuilt for any future transit use. So for the moment it's cheaper to let a community group take over the stable embankment and preserve the existence of the ROW for the future. Maybe some day someone will fund a commuter line along that route, but at the moment it would take a very large amount of money to pull off. I don't think the MTA is accountable enough to be given another big project like that and not overrun the budget by the billions.

Also there's no polluting factories along those tracks. Only 2 or 3 warehouses, a high school and a cement plant at the dutch kills end.

This whole thing is getting way too much press honestly. There's already a community group with a very nice garden on a section of this property, already MTA sanctioned. It's very nicely done and very quiet because it hasn't been given a boatload of press. I would trust that group to maintain this land much more than I would the MTA, who has left rusting crap up there for decades now. I hope their bid wins. They started from scratch with no backing from anyone.

Ridgewood, Glendale and Richmond Hill will never happen because this shill isn't to benefit for Queens !!
This is because the feds are all over that Montauk train. Its so packed to with Manhattan weekenders heading east to party the NTSB is now threatening to shut them down if they dont do something. 1000 seat trains are carrying 1500 2000 people!! Penn station also backs up with all these people & luggage waiting to board the few trains they do run.

Here is the story:
CBS newscast reported a recent LIRR cannonball run to Montauk held 1500 customers on a 12-car train with 1000 seats. 50% overcrowded and those without a seat had to stand the whole trip to Montauk. Apparently, the Feds are looking into LIRR overcrowding and whether it's a major safety issue with all those standing blocking the exits in the event of an emergency.

They started from scratch with no backing from anyone.

no one in queens starts from scratch and goes any where unless it makes the pols tons of money. that is what machine politics is all about.

agree with crappie. this is another use of our taxes and public assets to fund developers.