EDC tried to cover up contamination at Flushing Airport 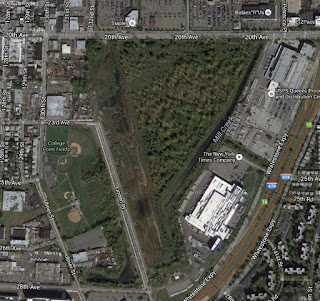 As part of the ongoing wetlands mitigation project, contractors began to strip the runway previously used by the former Flushing Airport. Visible pools of fuel were then discovered underneath, which went unreported as EDC apparently advised the contractor to continue operations. Furthermore, additional liquid petroleum was found at the excavation site of the nearby 132nd Street/Linden Place extension project.

According to an anonymous whistleblower, rather than reporting the issue within the appropriate 24-hour timeframe, workers were instructed to follow protocol as though the soil was mildly contaminated by metals and use it as berm material to be used throughout the City. By failing to disclose the presence of liquid petroleum and hiding it in soil used for park space, EDC officials are potentially breaking the law, and thus willing to expose countless people to the health hazard of oil contaminated soil.

Senator Avella was able to access the site being excavated along 20th Avenue, where a construction crew was apparently mixing the petroleum with mulch and tree leaves so as to cover the smell. Despite the New York State Department of Environmental Conservation (DEC) sending a spill team to inspect the issue early Monday morning, Senator Avella found that construction work was still ongoing in the mid-afternoon.

“To knowingly conceal petroleum contaminated soil and repurpose it use throughout the City is utterly disgraceful and borders criminality. EDC has shown that it is willing to expose people to a substantial health hazard, if it means preventing a delay on their project in College Point Corporate Park. Despite the efforts to conceal the truth, all of College Point could smell the foul play and reported the district wide scent of petroleum to Community Board 7. Our safety should not depend upon the diligence of the community and the conscience of a lone whistle-blower; I demand EDC to halt their project pending an investigation and answer to these allegations,” declared State Senator Tony Avella.

Senator Avella spoke with DEC following his press conference at the site and was informed that the agency was in the process of reviewing the allegation with the investigator sent to the site.

The Queens Courier has more.
Posted by Queens Crapper at 12:15 AM

The whistleblower was apparently " Dr. James Cervino—a College Point marine pathologist and Community Board 7 (CB 7) member working as a consultant on the project". So I guess Dr. Cervino can expect to be booted from CB7 as a reward .

This is what EDC does: promote development for their favored projects at ALL costs. It does not "border" on criminality: it IS criminal.

ironic how Avella seems to care now, but in 2001 he allowed for the destruction of the College Point Sports Complex. he "denied knowledge" but on several occasions was present at the time the dumping was occurring, which even happened during little league games. he fled the CPSA for the city council and it took years to clean up and fix his mistakes.

Avella is a blowhard who loves the sound of his own voice.

Oooh, somebody got caught with their pants down!
Great job!

Another fine example of Tony Avella on the job!!

Imagine how many times "Crap" like this happens and we the public never find out. Greed is a terrible thing...

Somebody should clean up the contamination and corruption at the EDC.
Impossible! That was just a joke. The EDC is partners with REBNY.
Alexander, Napoleon, Wellington, Patton....all together... couldn't rout these bastards!

It's a fucking airport. It is as contaminated as hell!
Just cover it up and the dumb public will never know.