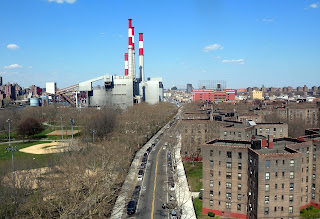 Tenants at four housing developments in northern Queens — including the Queensbridge Houses, the nation’s largest — are furious about plans to eliminate an NYPD command assigned specifically to those projects.

They say the 158 officers from Public Service Area 9 have established strong community ties and worked to dramatically cut crime in the developments that house 17,800 people. The housing cops will be reassigned to the local precinct, according to documents obtained by the Daily News.

“Why reinvent the wheel?” asked Queensbridge Tenant Association President April Simpson-Taylor. “Mayor de Blasio and Commissioner Bratton are always talking about building relationships with the police. We have a great relationship with the police. And now that we have it, they want to take it away?”
Posted by Queens Crapper at 8:26 AM

Don't Housing Projects account for a major portion of crime in NYC?

City engineered gentrification phase one: Make the area unlivable and dangerous so low income and middle class tenants will be discouraged from living there.

Phase two: This will open up vacancies and make it easier for Douchehag commissioner Shoya to open up the projects for big name developers or foreign investors to bring them up to market rate.

Phase three: profits. although a lot of people will be displaced and disenfranchised.

There are those that will consider this or any other future comments or theories hyperbole, but this is a civil rights and human rights issue (despite what the daily news thinks***,assholes). To deliberately end a necessity of a police presence is irresponsible, crude and stupid. They know there is still rampant crime that are concentrated in certain areas and the projects despite the boasts of Bratton and Mayor Duplicity and the lower percentages compared to 5,10 years ago.

***A Brooklyn-based non-profit group is mad about gentrification and “the displacement of low-income people of color.”

How mad? The folks at Right to the City contend that the movement of people with money into neighborhoods — followed by coffee shops, craft beer bars, restaurants and rising rents — is a human rights violation.

Yes, in a time when little boys are washing up on beaches and ISIS is raping female hostages, people worried about getting priced out of their homes have the gall to coopt that terminology.

Please, someone hike their rent, evict them and put an artisanal distillery in their place.

Can you blame the NYPD?

I DO NOT want more brave officers ending up like Ramos, Liu & Detective
Brian Moore!

We just had another officer shot and killed by a Ferguson "Black Lives Matter" protester and felon in Kentucky!

"he refused to drop his weapon and instead aimed it at responding officers, they opened fire. He was pronounced dead in a hospital roughly an hour later, police said."

Somehow the news is not making a big deal of it, nothing to see here keep moving along...

The world is upside down.

Let them all police themselves.

Sort of like taking all the warning labels off and letting Darwin intervene for a while.

JQ, I disagree. The projects are already dangerous and uninhabitable, but these people have no where else to go. They're not going to leave no matter how bad it gets. Besides, you are aware in the sanctuary city that is NYC, we must shelter those who don't want to work to pay for their own shelter (except for you and me). As such, private developers will never be able to take it over. That would be a great thing, though.

Why is it that the rest of NYC is coping with the economy (good or bad) and surviving, but the folks in the projects just keep on trucking?

A change is needed already. If NYC started another agency just to look into who should really be there and who shouldn't, there would be plenty of vacancies for real families needing a chance for a leg up, not out of town folks looking for an almost free new start in a city with jobs.

If someone living there is on a "program", but they just leased a new Honda, something is terribly wrong in the projects.

Let people that really need a new start live there, limit their stay to 2-3 years and then out!

Projects have become a permanent sanctuary for people that adapt to what our city/state has to offer.

Which four developments? Are they counting Q'bridge as two (QB North, QB South) ? Plus Ravenswood and Astoria Houses. Or counting QB as one, and including Woodside Houses ?