Wolkoffs plan to cash in on 5Pointz name 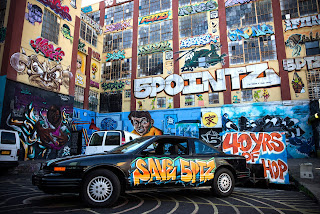 The owners of what was once home to the iconic outdoor art exhibit 5Pointz – which has since been demolished completely – have reportedly announced that they will recycle the name for new residential towers taking its place.

Jerry and David Wolkoff of G&M Realty tried previously trademarking the name but the U.S. Patent and Trademark Office denied their request. A California-based real estate company had already trademarked the name.

However, they were able to register the name as a servicemark with the state, according to published reports.

The site, located at 45-46 Davis St. in Long Island City, will soon be the home of two $400 million luxury towers with 1,000 units divided between the two buildings.
Posted by Queens Crapper at 8:06 AM

Clever, but I think they'll find their potential customers have no interest, need, or appreciation in signing up with anything named after the pre-existing vandalized and graffitied building on the site. They should take that name to the LES or far west side if they hope to make some $ on it.

The Wolkoffs are grotesque monsters. They are just one fraction of the confederacy of scumbag predator developers that have engulfed this city. Blatantly stealing names to title their tumor project does not bother them the bit, and why not since these types have their team of immoral lawyers to tie up the courts for years just to plunder the name and frustrate the 5pointz collective to eventually quit if they fight them

Great picture, it actually does justice to the splendorous public art exhibit and once only reason to visit the once and to the surprise of those who read the real deal still blighted area. I saw it right before they painted over it, people have no idea what they missed.

I'd fight that in the state Appelate Court!

BTW....I believe that Stephanie Winston (Harry Winston Jewler family) married to David Wolkoff, is being sue d for money owed their governess or nanny. Maybe it's both David and Stephie that are being sued.
I'm sure that the Harry Winstons regret the day that they hooked up with that sleazy Wolkoff family.

It doesn't matter. Money is tight these days and that will sit as a hole in the toxic ground for years.
Wasn't it far better to have had 5 Pointz, you scum bag Van Bramer?
Ask Court Square Diner how much business they've lost since 5 Pointz was razed.
How much money did LIC's economy lose? How much tourist money did Queens lose because 5 Pointz was a major attraction for Queens .
We are always talking about bringing tourism to Queens, yet we obliterate a chief attraction. Dumb move.

Wolkoff will build a crappy looking building, no matter what name he is allowed to give his real estate company. You can bank on that.
Meanwhile 5 Pointz has achieved a very important place in the history of art. It will be remembered long after Jerry Wolkoff's bones are mouldering in the grave. Since nothing has been built yet, maybe he intends to flip the property. I Would....rather than hold onto, what now ,appears to be a white Elephant. Bad luck to you, "big" Jerry.

5 Pointz brought in a walking crowd from time to time that didn't by much of anything as their visit was a short and trivial one.

Quite frankly, anyone that happened to own the same property may not have been so lenient with the people they "bought out".

The only folks that have suffered are the artists that somehow were under the impression that their little peace of heaven was theirs forever for no reason at all.

Enough of the artist's dreams already, move on.

Scott, maybe you were to high to really take notice of what was really going on in the area.
Money came into the area and people stayed there long enough to spend it. . Most people went to 5 Pointz rather than pissy PS 1.
You sound like a malcontented crummy artist who wasn't good enough to get a painting permit at 5 Pointz.
Sucking up to Wolkoff might get you a painting spot at his former Pilgrim State mental hospital site, way out on Long Island.

5 Pointz gave value to that slumlord's property. Wolkoff was so neglectful of dangers that existed there.
He carved up the building into illegal artists' lofts which got padlocked by the DOB after an FDNY inspection. It violated NYC fire code.
Then, because of a rickety external staircase....an artist named Nicole...plunged fourty feet below when it suddenly collapsed. Wolkoff is still fighting her claim for compensation. She almost died and remains with her afflictions as a result of Aolkoff's negligence in ,ain't aiming his property.

Pull your tongue out of Wolkoff's sphincter, unless you happen to be his paid public relations spokesman.

Sorry to have to disagree with you Scott.
I was around there when it was still Phun Phactory.
It was the 5 Pointz artists that brought attention to Wolkoff's slummy building,
not the other way around.
I will not dispute that he gave the artists an opportunity to paint.
Any increased real estate value that the site has is due to 5 Pointz.

Big daddy Jerry Wolkoff is cashing in on a real estate investment he bought for peanuts in the early seventies. What could he have paid for it then...about two million tops? I'll have to look up the transaction online to get an accurate figure.
Now, with an approved zoning variance that allows him to build fourty stories instead of twenty, that site is worth about two hundred million completed.

I'd call that some "capitalizing". Others might call it screwing the artists for getting peanuts to promote his building.

What about the money Wolkoff got from the movie company who filmed "Now You See Me"?
It featured 5 Pointz for at least ten minutes in the conclusion scene of the movie. The artists got ice cream money from Wolkoff.
They put his spot on the map! Otherwise this be just another one of Jerry Wolkoff's commercial slum buildings.

It's an easier deal being a commercial, rather than a residential, slumlord. There is no warrant of habitability that he must fulfill with commercial property.

You are missing the point, Scott, and you other haters. The very fact that Wolkoff needs the 5 Pointz name to promote his project means that he got much more out of 5 Pointz than he gave to 5 Pointz.

Federal court denied his access to the trademarked name of 5 Pointz. We know how crooked Albany is to ignore that federal decision.
This needs to be fought in the state Appelate Court. You've got the case of an arrogant, iron footed scum bag screwing the artists.

How old is Wolkoff? He might not see his dream completed. Oh...and to pass down his empire to that gawky doofus son of his, David, probably wants to make daddy Jerry want to live forever.

In the end, it's 5 Pointz, not Wolkoff , that will be remembered throughout art history.
If Wolkoff gets any mention, it will be a footnote as the destroyer of 5 Pointz.

Meanwhile Wolkoff's building is going nowhere because he owes Metro Demolition money.
He is WAY behind schedule. And in his business delays coat millions. He was being sued by the unions out at his Pilgrim State site.
His cheap slumlord reputation is well known. Among the big fish in the great sea of real estate developers, he is just a little fish in a little pond. My bet is, that he flips the property to a bigger fish....if he lowers his price.

Call it "Platinum Towers" and the former 5 Pointz site will still be a noisy toxic location for so called "luxury" development.
As far as Wolkoff bringing back aerosol art to some walls he will build...pure bullshit!
What resident will tolerate spray paint fumes wafting up to his apartment?

If Scott is an aerosol artist jockeying for a spot on Wolkoff's new 5 Pointz to paint his dreams, he will be grossly disappointed when there are none. Promises made are easily broken without a legal contract. Good luck. Beam yourself up yourself, Scottie dog.

Look at that photo!
Now that is art , compared to the shit that's there now!

Hold your breath , you #7 riders, while you pass that dusty, toxic hole in the ground.
What poisonous particulate matter are you ingesting?
Fill your lungs with Wolkoff air!

Just how safe is that site to the thousands of commuters who swing past it each day?
Can you really trust DEP to monitor the area for toxins
left in the ground by the Neptune Water Meter Company, which occupied the site for almost one hundred years?

I can remember the early days of demolition, when I was riding the 7 train.
One day as the train approached the bend In the track, I started coughing and it did not fully subside until I had reached Grand Central.
I avoided that area afterwards. Switching from the 7 line at Queensboro Plaza to another line was my choice instead of riding past 5 Pointz.
I know of others who had similar symptoms. Maybe the dust had drifted into the subway cars.

Okay, okay, it appears I've been insensitive to some overly sensitive folks.

Forget who owned it, forget that "artists" were able to legally use walls as they wanted, walls that no longer exist.

What it was has a lot less meaning compared to what it will become.

What was 5 Pointz has nothing to do with what is happening in the area development wise. Any development group would have acted the same way. 5 Pointz in itself is not responsible for what that property is worth.

If it was never used in the way it was, if artists never used it as a empty canvas, it would still be what it is now, a hole waiting for concrete and eager beavers.