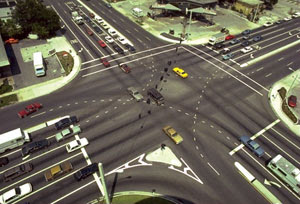 The city could have 200 fewer parking spots at dangerous intersections under a City council bill being introduced Thursday.

Councilman Ydanis Rodriguez wants to ax up to eight parking spots on 25 perilous crosswalks in across the boroughs.

“You improve the visibility for drivers and you also create better conditions for cyclists and pedestrians to cross in those intersections,” Rodriguez, chair of the council transportation committee, said.

Disappearing parking spots has been a sore spot for drivers as the city pushes Mayor de Blasio’s Vision Zero street safety program and new Citi Bike stations.
Posted by Queens Crapper at 8:44 AM

Hey Rodriguez, you gonna give up your spot at City Hall to help offset the loss?

On one hand, there's not nearly enough parking in the city as it is, and we can't afford to lose any more.

On the other hand, there are a whole bunch of intersections I can think of that would be well suited by more visibility and room at the corners.

Rather than removing parking spaces, they should prohibit vans, trucks, and SUVs from parking on corners (and I say that as an SUV driver myself). It can be dangerous pulling/inching out into an intersection from a stop sign when there's a big SUV blocking one's view of oncoming traffic (or of bicyclists or pedestrians).

Tax SUV's more because they take up more space and the parking space could go to smaller cars and used to make intersections safer. Ever try to see over a parked SUV at the corner stop sign ?

I believe a Middle Village attorney named Suraci proposed such a daylight law years ago, prohibiting SUVs from parking within a certain amount of feet from corners, for safety resulting from greater visibility for cars turning into intersections. I also recall then Councilman Dennis Gallagher opposing such a law on the ground that it would eliminate parking spaces. Since the law was only targeting larger vehicles, the effect on the number of parking spaces would be minimal, and would be outweighed by the safety resulting from greater visibility at intersections. It was Mr. Suraci who got DOT to place a daylight sign at a very dangerous intersection at the corner of 79th Place and Furmanville Avenue. The dearth of parking spots is more attributable to people who warehouse their cars in the same spot in front of their house for years because they can't walk more than 5 feet to get to their cars, and have to keep an eye on them constantly. It's the selfishness of residents, rather than safety measures, that prevents people from finding spots that should be available to all.

Any bike racks or citibike stations they put in should go in corner spaces instead of crowded sidewalks and parks. Much easier to see past a row of bikes than a tall SUV with pitch black windows.

Why not just ban cars altogether? This is just a systematic assault on the legal motorists in the city. The death of 1000 cuts.

Realize that the pedestrians and cyclists are always playing the victim.

But these are that same ones that jump out from between parked cars on busy streets, or better yet use the stroller with a strapped in child as "probes" out into traffic. They are not crossing at the crosswalks, or with the walk signals. And lets not forget those so who are so engrossed in their devices that they walk right into traffic. The council wanted to ban texting and walking. Just what we need another law. Be careful election season is coming and the politicians must justify their miserable existence by enacting useless legislation so they can say they did something. You and I will suffer for it.

I have yet to see a cyclist get stopped for running red lights or stop signs.

So for these law breakers we motorists must have our quality of life continuously degraded. So we can drive endlessly around, looking for a parking spot, burning up a quarter tank just to park. My only satisfaction is knowing that the pedestrians and cyclists are sucking in a lot of those fumes from my old clunker.

You know what this is really all about? Revenue!!!I just saw a speed trap in an area where there are basically no pedestrians. This is just generating revenue, if it was about safety, it would be targeting areas with large pedestrian populations. And the day-lighting - as we fight for parking cars will encroach on the legal limits of hydrants and no standing/parking and a few inches will make the city $115 at a time. Big Government needs Big Bucks!!!

We are on our way to The Comrade's Chinese cycling utopia, or more likely Detroit...

Get out if and when you can!

How about we teach the pedestrians to stay on the sidewalk and not stand in a traffic lane waiting for the light. How about we enforce the traffic laws for bikes, get them off the sidewalk, stop at traffic lights and ride with traffic. I'm fed up that the problem is always the motorist

Tax people who insist on solving every problem with taxes.

Then tax anyone who seeks to increase the population density via upzoning without the commensurate redesign to roadways and infrastructure. Oh that's right, too expensive to build a whole new Queens, of course, so let's just keep dumping people into the labyrinth and budget in overpriced workarounds into forever.

Let's dump record amounts of sand, salt, and grit on the streets because last year's tarring over still looks good, and we can't have that. We need roads breaking up annually or else crews can't get paid. In fact if a road lasts more than a year, we ought to replace something underneath it, of course chewing up the good road so that we will have to replace it with good road.

Whatever happens, moar moar moar. Tax tax tax. It's for the chilluns'. Don't be hatin'.

This is happening and the sidewalk parking will increase as well.

The danger at these intersections is not so much the cars parked adjacent as it is that drivers don't want to stop at stop signs. Everyone wants to do a " California Roll" and sort of slow down. If you actually stop and proced with caution the only time there is trouble is if a large van or truck is parked at the corner.

Rather than removing parking spaces, they should prohibit vans, trucks, and SUVs from parking on corners (and I say that as an SUV driver myself). It can be dangerous pulling/inching out into an intersection from a stop sign when there's a big SUV blocking one's view of oncoming traffic (or of bicyclists or pedestrians).

I have been thinking the same thing for years...parking at corners by SUVS, vans, and trucks should be prohibited. It is nearly impossible to see if there is oncoming traffic when trying to make a turn from a street where any of these tall, sight-obscuring vehicles are parked.