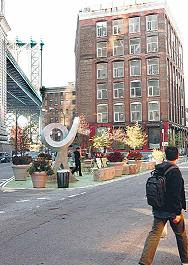 The defensive shield that protects historic buildings from the whims of real estate developers grew significantly Tuesday, after the city designated seven new landmarks, including a former pencil factory in Greenpoint, Lord & Taylor on Fifth Avenue, and the former apartment tower home of Grace Kelly and Benny Goodman on East 66th Street.

In a city famous for a teardown mentality fostered by soaring real estate values, the idea of preservation may itself seem endangered. But it is the very speed of development that may have sparked the current wave of landmarking activity.

In fiscal year 2005, only 46 buildings were landmarked. In fiscal year 2007, 1,158 buildings received protection, the highest number since 1990. The commission has also been aggressively landmarking in other boroughs, such as Queens and Staten Island.

"There is a lot of very aggressive activity going on here in support of historic designation," said commission chairman Robert B. Tierney Tuesday. "We have the support of the mayor, and that makes it easier."

Apparently Mr. Tierney got cut off. He surely must have said that if you are in a tweeded redlined area then you have a snowball's chance in hell of getting a landmark in your 'hood. And he forgot the part about focusing landmarking efforts in areas that either are already wealthy or where the city is leading gentrification efforts.
Posted by Queens Crapper at 7:15 AM

Tierney is a partially brain dead marionette
who still dances at Bloomberg's whim.

Don't try patting him on the head
for the "fine" job he's been doing.....
your fingers might get tangled in the strings.

Bumbling Bobby is just playing a numbers game.
"Look how many landmarks we're designating"...
yeah.....in every other borough but Queens!

Didn't they just landmark a huge section of Sunnyside?

Pardon me while I scratch my ass
while I'm trying to figure out where!

Instead of landmarking schools,
city pools and firehouses in Queens
(which under the law are exempt
from adhering to LPC's rules if they wish).....
try landmarking some real endangered sites
like the Windsor School
and the adjacent Flushing Free Synagogue!

What about the LIC Savings Bank? Oh right, the "preservation leadrship" never bothered to do anything about it.

Yes, they landmarked Sunnyside, the next gentrification target. Preservationists with clout also happen to live there.

Most people think gentrification is a good thing.

"Most people" being who? People other than the gentrifiers who will soon pay double for everything, including their rent and lose their mom and pop stores but gain a Starbucks? Yeah, gentrification sounds terrific.

People are willing to pay higher rents if the area becomes more desirable, which is a good thing.

"People are willing to pay higher rents if the area becomes more desirable, which is a good thing."

Who is that good for besides absentee landlords and yuppies?

A neighborhood becoming more desirable is a good thing for those people living in the neighborhood, and not so good for the things or people that had made the neighborhood previously undesirable. Do you think that Sunnyside is filled with absentee landlords?

Gentrification displaces people who are vital to the fabric of a community. It pushes out people from middle class backgrounds and especially small business owners.

What neighborhoods do you think have been "gentrified" to the detriment of the community "fabric"? Williamsburg? Tribeca? Harlem? Long Island City? Bushwick? The changes to these areas are enormously positive. Are there others you are considering?

You can add Greenpoint to the list, too. What they are doing there is terrible.

Bed-Stuy, Spanish Harlem. Places where people of color were able to to afford to raise a family and celebrate their cuture. Now - vanillafication and mass exodus down south. I guess this seems like a positive change if you're white and only care about real estate values.

It's happening in Great Neck, too.

Mayor Ralph J. Kreitzman said he would like to see the complex remain moderate-cost housing, adding that the scarcity of such housing forced the village to build units for its ambulance workers, firefighters and other employees.

“Even people who make a good living can’t afford to live here anymore, and we’re losing a very important work force,” Mayor Kreitzman said. “Those apartments house a lot of local workers, a lot of good citizens that have lived here for many years,” he said. “Many are not highly compensated people, and we’re very concerned. It’s not a simple process to relocate these people.”

Removing the working class and replacing them with the affluent is considered "progress".

What did the GAHS
(as part of the "preservation leadership")
specifically do to save it ?

I know those folks in Astoria tried to save the Astor school and old Astoria Village. As you in Maspeth have discovered, if you live in a red lined district all you will get for your effort is the cold shoulder by the preservation community and rejects reject rejects from the commission.

A rather impressive stack of rejects are abuilding. So someone skipped the bank in Queens Plaza. There are only so much time to mail out letters knowing that you are a no-go before the stamp dries. We cannot cover every building.

When that mural was stolen back a few years ago, and its was publicized, all that happened was a big yawn out there.

Right now we in LIC are doing a survey of our community for a proposed LIC historic district. We know that no one is going to take us seriously.

We are putting together a dossier of rejects that will come back to haunt the smug preservation movement in the not to distant future.

That is all we can say for now.

Bed-Stuy and Greenpoint? Both were dirty, high crime neighborhoods years ago that have become cleaner and safer due to gentrification, among other things. My friends in Greenpoint have been thrilled with the changes to the area in the last 5-10 years.
This is a free country. If people freely choose to live in a neighborhood, those free market dynamics can cause rents and property values to rise. It could then lead to people freely deciding to build housing conducive to the market demand. If you want the government to control who can live where, you should move to a communist country.
As for the Great Neck article, that area is within 10-15 minutes of affordable communities for moderate income residents, such as Elmont, Valley Stream, West Hempstead, Franklin Square, etc. The crux of the issue in that article is rent controls.

Can't speak about Bed-Stuy, but I have lived in Greenpoint for ten years and will have to leave soon because I can't afford the rent. The writer saying that this was a dirty, crime-ridden area is a fool. It was primarily a tight-knit Polish enclave. Now the Polish are forced to move into Maspeth so the yuppies can live near the train. The gentrification was forced upon us by the rezoning of the area to allow for high-density residential buildings.

"It could then lead to people freely deciding to build housing conducive to the market demand. If you want the government to control who can live where, you should move to a communist country."

The government rezoned the area around McCarren Park for high-rises, thereby ensuring that gentrification would follow and the old timers would be forced out. So, the government DOES control who can live where. Lots of similarities between 1970s USSR and 2007 NYC.

The government rezoning has been more reactive than proactive. The government is not putting up the buildings. If there were not a demand for higher priced buildings, private developers would not build them to stay empty.
This is a free-market ownership society. If you own your residence in these neighborhoods, you don't have to worry about increased rents. If you are a renter, you will always be subject to market changes in a free society. I believe in freedom, not in the government controlling rents and where people can live.

Actually, the government brags about how they are helping upzone areas in order to accommodate a million more people by 2030. This was a number they apparently pulled out of their ass because almost as many people leave the city as come in each year. So let's bulldoze entire communities in order to build new ones with no soul.

So let's bulldoze entire communities in order to build new ones with no soul.

The landmarks law should be overturned.

I have a funny feeling that Mickeljohn will put up a Bangladeshi in Sunnyside to do just that.

Looking forward to the law's dark underside to be exposed.

I believe in freedom, not in the government controlling rents and where people can live.
---

Let me know where you live - I would like to build a fat rending plant next dooor.

People are willing to pay higher rents if the area becomes more desirable, which is a good thing.

Not really. If you are ghettoized you have no choice but pay high rents even in a community no longer desireable.

"If you own your residence in these neighborhoods, you don't have to worry about increased rents."

No, I have to worry about my taxes going up, a crumbing infrastructure due to the rapid rising of all these buildings without the proper planning of sewers and electrical grids, and even more crowded schools and transit systems. Not to mention the transients who live in these buildings for 1-2 years, and show no respect for where they live by letting their dogs crap in the middle of the sidewalk, come home in a drunken stupor and pee on the side of your house, etc.
I never had a problem with a neighbor peeing on my house in the 35 years I live in LIC until now.