You're in God's hands with Allstate 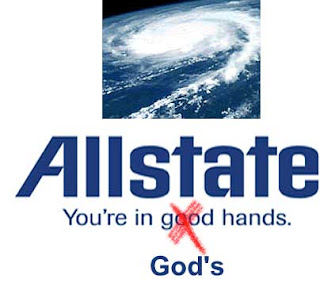 On October 30, 2007, the New York City Council’s Committee on Consumer Affairs will hold an oversight hearing on homeowner policy terminations in coastal areas of New York City. It will also consider a resolution which will call upon the New York State Legislature to pass legislation that would lower the percentage of homeowners’ insurance policies that an insurance provider may cancel or refuse to renew without the approval of the New York State Department of Insurance.

Recent rainstorms and a tornado in New York City this summer exposed the City’s vulnerabilities and highlighted the importance of New Yorkers’ ability to protect and insure property during extreme weather conditions.

Insurance firms such as Allstate and Liberty Mutual Group announced it would discontinue coverage on New York City homeowners who were considered susceptible to storm damage. Critics have charged that such cancellations were made depending on whether homeowners held additional policies with the insurance company.

Allstate did not respond to numerous invitations from the Council to testify.

WHERE:
250 Broadway, Manhattan, 14th Floor Hearing Room
Posted by Queens Crapper at 12:10 AM

Hey, what is the insurance coverage for those developers (private and public) that are putting thousands in harms way on the waterfront.

Are they still getting insurance? I bet they are.

Then why is the little guy losing coverage? I hope someone looks into this a sues the bums. If the little guys are denied, then the same for the big shots.

Then lets see how much development is on the waterfront if they have no insurance.

I have a home owners policy with Allstate and called my agent to get a quote for my elderly Mom's home, whose policy with another carrier had become too expensive. To my disbelief, they were not accepting home owners policies buisness and informed me that Allstate is actually actively dropping existing coverage if additional policies such as car and boat insurance is not also included. Needless to say the independent agent is ticked off because they cannot provide new buisness and losing existing policies. There seems to be only 2 other outfits - Tower and Tristate that are picking up insurance but at 2x the cost of my existing policy? What is a consumer to do..