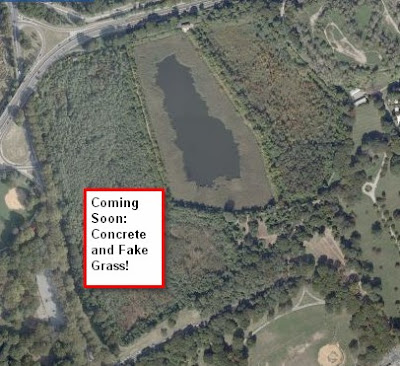 Last night Parks Commissioner Adrian Benepe confirmed that the “listening sessions” about the future of Ridgewood Reservoir were a sham. Despite its so-called Million Trees initiative, the Parks Dept. has always planned on bulldozing over 20 acres of existing trees and native habitat in probably the single healthiest forest anywhere in Queens and Brooklyn to put in ballfields and astroturf. This is being done to expand Highland Park, which currently consists of about 100 acres of poorly maintained, underused ballfields. Apparently they’d rather build new fields than fix and maintain the old ones.

The claims made back in the summer that no decisions had been made were lies. We’ve uncovered evidence that the Parks Dept. had decided at least as far back as May and probably earlier exactly what they wanted to do. I guess they were hoping the public comments would rubber stamp their decision. However, when locals expressed their strong preference for passive, low-impact uses like jogging, walking, bicycling, and nature; and their active distaste for any more soccer and baseball, the Parks Dept. ignored them.

The Bulldozers are Coming to Ridgewood Reservoir

Why would they take the time to organize two community meetings to get input from the very people that this project will most impact, and then completely ignore them?

The Community "Listening Sessions" were deaf

Why ask why? We know this administration doesn't give a rat's patootie about the wants and needs of the taxpayers they are supposed to represent. It's all about what they want. They don't want to hear other people's ideas about anything. Think they own the city. It's a phenomenon called "billionaire's mentality".

Want to fight it? Visit Save Ridgewood Reservoir.

Most of these projects aren’t budgeted, they come through on grants which is why Parks has money to build, but not to maintain. Why isn’t the community protesting at the commissioner’s office in central park or getting the media involved?

They haven't even found out about this yet. This is money from the 2030 budget, anyway, not a grant.

Those so-called "forests" are nothing but unusable, dangerous and overgrown empty basins from the old reservoir. I've been in them -- there's no way you can open that up to the public the way it is. You can keep them and just look at them from afar, or you can nuke 'em and build something useful. I say nuke 'em.

Is someone organizing a protest, letter writing campaign, etc. on behalf of the "Ridgewood forest?"
Who is the Council Member(s) for this location?
Does the Community Board know and what is their stance?
I like seeing the issue being raised, BUT isn't it time to make an effort to reverse the decision?

The councilmember for this district is the indicted-for-rape Dennis Gallagher, who, when asked for additional funding for programs at the reservoir, said, "My people don't visit the reservoir." The community board is in favor of the site staying natural. The protest is being led by Ridgewood Reservoir Education and Preservation Project.

Before you blaim Bloomie, ask the community board, elected officials, and newspapers what THEY are doing.

But it's not "natural" in the first place. "Natural" would not mean trees growing in the empty basins of an old reservoir. If you want something that resembles natural, then Parks would have to remove the reservoir and plant trees, and in 15-20 years there will be natural growth in a natural setting. Right now it's really just ruins -- an old relic of an old water system no longer in use.

Oh, the conspiracy theories are coming fast and furious from the JPCA. Class warfare against the good working people of NYC by every member of an administration that previously was praised and awarded by said civic.

My newspaper, Forum West, has been reporting on this and will again this week.

Reforestation is a natural phenomenon and that is what is taking place here.

JPCA? I don't see anything about them in this post. The 2 blogs linked to are written by Brooklyn birders..

This JPCA basher reminds me of the Arris troll from Curbed.

Why don't we invite parks to start using the "closed to the public" baseball fields at Juniper Park??

That way we can save the Ridgwood Forest??

You have my vote on that!!!

The poster above who seems to believe a forest needs to be planted by almighty mankind in order to exist .... ugh, did you fail biology or what?
A forest will return to it's natural state all on it's lonesome, just like God or Nature (your choice this time) gives it the power to.
OK, just go this website:

and see the video they produced of exactly how this is happening in Ridgewood. See how local scientists & professors have testified to this incredible phenomenon.
Bloomberg and Parks have a chance to be a reknown leader in America when it comes to the urban forest, which does much of what the 2030 Plan claims to want for our future.
If they plow this place under, they've simply defined themselves as hypocrites and liars.

This is a city, not a corporation, not everything should about profits. What else can you expect from a billionaire mayor who ran a financial company?

Isn't Ridgewood one of the "Forever Wild" sites?

Anonymous said...
"Oh, the conspiracy theories are coming fast and furious from the JPCA. Class warfare against the good working people of NYC by every member of an administration that previously was praised and awarded by said civic."

Here's what this frothing moron needs to know: Bob Holden created all the trees and flora and fauna.

All that is green belongs to Holden and the moron who wrote the disrespectful comment needs to be punished for a time in Hell.

These are not "conspiracy theories". That Bob Holden created all that is good and beautiful is simple Biblical fact.

Bob Holden failed in his creativity, since he let some morons slip through and let them use the Internet that he also created. But, here's how I look at it. If it weren't for the morons who pop up from time to time, the rest of wouldn't look so good or have any fun laughing at the moronics.

Bring back that contoversial
hanging tree political cartoon
that ran in the Queens Trib.

Just change the names of the perps
responsible for this latest travesty !

Stop all this arboricide once and for all....
HANG BENEPE & Co. "to a sour apple tree"!

After hearing so much about the Ridgewood Reservoir I rode my bike down Cypress Hills street for a better look. It is not easily accesible to Ridgewood and Glendale residents north of Myrtle Avenue and the surrounding "Highland Park" is on the run down side and lets be honest, the surrounding neighborhoods of Cypress Hills, East New York and Bushwick are not the most civic minded. What I did see of the reservoir is untouched and beautiful and it should stay that way. The whole proposal is supposed to be about the year 2030 and I cant imagine anything more important to the overcrowded sity of New York in 23 years then untouched natural wooded land. Lets keep it that way.

Don't you all understand?
Can't you see the forest for the trees ?
The city has got to cut it all down !

Why..... there's a gold mine in kickbacks
to politicians awaiting
in exchange for current and future "favors"
($$$$$$$)..... come election time.

There now......I hope I've made it all perfectly clear!

This is how clubhouse "democracy"
works here in the borough of Queens!

A small wild forest in the heart of Queens and Brooklyn does have a value to people, and the many species of plant animal and birdlife that have re-colonized the area prove that the forest is not unusable. It's just not useable for ATVs and motorbikes. The Resevoir is probably the only habitat in NYC where the wild river otter could realistically be re-introduced. There were once tens of thousands of otters and beavers here, now there are none in the wild. Since otters do not reproduce close to where there is human activity, there could only be very limited and carefully controlled tours of the area, but that is true in most successful nature sanctuaries anyway. This would be a great thing for our school children to learn from in biology class. As for ballfields, why not use the millions to refurbish the totally rundown ones already existing all over the south and western parts of the park?

OK, yes it's true -- forestation is a natural thing and would happen without people getting involved. I take that back, it's not necessary for anyone to plant anything for nature to run its course.

But it still doesn't change the fact that all this "reforestation" is taking place inside totally unusable and dangerous abandoned reservoir basins.

Yes, from a scientific standpoint, it's great that such a dynamic and natural habitat has developed in these relics of our old water system. However, let's face it... at its present state, what percentage of Queens/Brooklyn residents can/would actually go in and enjoy all of this?

I propose that we cut down the trees, fill up the basins, and construct something that we can all use.. for example, a NASCAR track/raceway or something of that sort.

Ha ha I assume the last poster was being sarcastic. Trees and a healthy environment is something we can all use and benefit from.

The city views ALL undeveloped land
as "UNDERUTILIZED"!

If there was so much as a tiny
one inch square scrap of real estate
left in NYC that wasn't built upon.......
Bloomberg would quickly drill a hole in it
and f--k with glee !

Anonymous said:
"If there was so much as a tiny
one inch square scrap of real estate
left in NYC that wasn't built upon.......
Bloomberg would quickly drill a hole in it
and f--k with glee !"

One tiny correction. For Bloomberg, a pinhole would be more than sufficient. That's the word from the boys and girls he favors.

Why..... there's a gold mine in kickbacks
to politicians awaiting
in exchange for current and future "favors"
($$$$$$$)..... come election time.

You got that right.

Deforestation is one of the biggest contributors to global warming. How does this fit in with PlaNYC??
http://www.fao.org/newsroom/en/news/2006/1000385/index.html