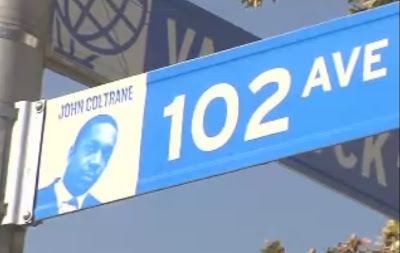 Dizzy Gillespie and Louis Armstrong were jazz legends, but did you know that they were also neighbors? NY1's Ruschell Boone tells us that when several musical greats moved into Queens, a jazzy borough was born.

Though Little-Known, Queens Was Once Haven For Jazz Musicians

“I moved here in 1964 to Corona at the urging of Clark Terry and Cannonball Adderly who were already here, because I had two young children and I liked the schools and the atmosphere,” says [Jimmy] Heath. “We had trees out here and I didn't have trees where I was living in Philadelphia.

Notice he said "had" trees.
Posted by Queens Crapper at 12:10 AM

it's great that the city put John Coltrane's name and portrait on a street sign where he dwelt. He was a great and innovative musician who deserves the tribute and then some.

It's "nice" to have decorative markers put up
in lieu of real vibrant neighborhoods now destroyed
that fostered such talent!

Interesting. The city renames the Interboro for Robinson who had nothing to do with it, stadiums after blacks sports heros, yet when it comes to real services for the African-American community (like school desks or something to address the subprime mortgage crisis), well, a pat on the head is all that can be expected for now.

"It's "nice" to have decorative markers put up
in lieu of real vibrant neighborhoods now destroyed
that fostered such talent!"

you make a good point there, sad to say.

Listening to Coltrane's deep sounds.....
is almost better than a orgasm.

And it sure beats a sermon from the pulpit.

if anyone is interested in checking out some free Coltrane videos this site has a good number, along with ones of other jazz artists from the past like Parker and Diz:

I know a girl from Queens. She is very prideful of her homeland dispite the connotations of having no trees. The land has a lot of jazz history behind it.