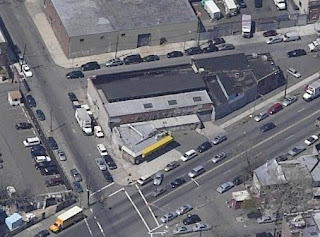 Here we have a low-rise manu- facturing property under M1-3 zoning. It's located along a gritty stretch of Van Dam Street. The name of this area is still called "Blissville" by some. 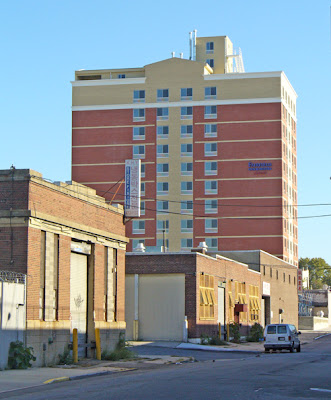 A 12-story hotel now sits on the triangular lot at 52-29 34th Street, which was combined from 4 separate lots. The run down deli with the yellow awning is still in front of it. The rest of the neighborhood is commercial, with a handful of 2-family houses mixed in. Under M1 zoning, hotels are allowed. But Fairfield Inn and Suites by Marriott? And one that's this high? Sheesh. The shady locations of Queens hotels continue to boggle the mind. I bet this area has great sewer capacity, too.
Posted by Queens Crapper at 12:00 AM

These were built to be homeless shelters as soon as the hotel gets a little shop worn.

Funny, the community board, elected officials, and newspapers don't pick up on this.

Perhaps they are doing the important stuff like breathlessly reporting some private waterfront landgrab (sorry, publicaccessjobscreationproject.)

"an out of the way hotel"

I like the firehouse closed around the corner on Greenpoint Avenue.

Those bastards that run this city are bums.

Of course, they could never get away with it if they did not have support from city council and the newspapers.

I think you mean a hot sheets hotel.....
maybe already in use for that purpose.

True......
you should see some of the colorfully clad hookers
who frequent the doughnut shop at Queens Plaza.....
va, va, voom !

What are the hotel's hourly rates ?

This is Queensborough's "Plaza".....
it sure ain't the grand old "Park Plaza"!

No extra charge for the bed bugs!

Another entry for the "Democratic Dictionary":

An independent businessman (or woman);

speaking of good looking prostitutes I once saw some in the city. These two women were absolutely beautiful: long straight blonde hair, lean as can be, and packing some mean curves. They were probably Czech, and I was amazed when their Russian speaking bearded pimp started belting out instructions. Sometimes you really can't tell who's who.

Don't you just love this board?

Its like a tarvern in olden times. A page out of Treasure Island.