Weeping for a Bay Ridge willow 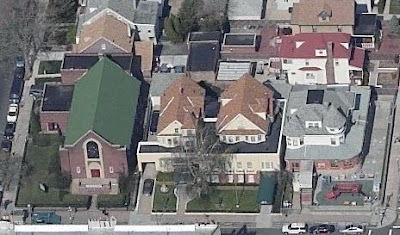 The sale and demolition of a funeral home in Bay Ridge to make way for a 7-story condo forced the unearthing and moving of a time capsule buried in 2004.

For a Time Capsule, a Future Imperfect

But what will happen to the weeping willow tree beneath which it was buried? And considering the following, is an archaeological dig planned for this property?

The Bay Ridge Funeral Home site was originally chosen because it the land it occupies once housed the farm of Jacques Van Brunt, one of the prominent citizens who voted to change the area’s name to Bay Ridge back in 1853.

We'll soon be witnessing the destruction of a beautiful Brooklyn block.

Photo from NY Times
Posted by Queens Crapper at 12:32 AM

Welcome to the club of forgotten boroughs Brooklyn.

We also weep for you....here in Queens.

If that "illustrious"
"4 Borough" organization did the job it was supposed to do.....maybe this wouldn't be happening.
But they seem to be more concerned with raising a
hefty $40,000+ annual operating budget.

Maybe an appeal to him to save that tree
might have accomplished something.