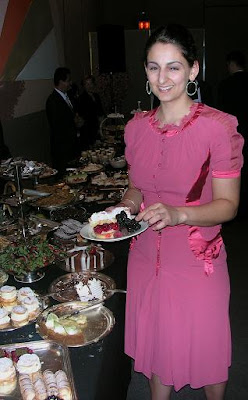 A letter to the editor from the Times Ledger:

Whatever one may make of the sign depicted in the newspaper photograph, it is inappropriate and unlawful for the city to be demanding that the association censor signs or other expression at rallies it sponsors. As you presumably know, signs and other messages at political rallies are fully protected by the United States and New York Constitutions, and the city has no power or right to suppress messages to which it objects.

We call on you to rescind your demands and to meet with the association without imposing any conditions relating to public rallies. To the extent you are interested in discussing this matter, we are prepared to meet with you. Otherwise, we look forward to receiving a written response.

We'll see if CAU responds or shows up at next week's meeting of the civic.
Posted by Queens Crapper at 12:14 AM

That is the ugliest most god-awful dress I have ever seen!

Who is she catering to....developers ?

Thank you NYCLU for reminding
our aloof autocratic mayor and his CAU commissioner
that the 1st Amendment still applies in NYC.

Once again, I repeat......
If they can't take the heat
let them all get the hell out of politics .

What a bunch of tit babies !

I think that she's perfectly qualified for her job
as CAU Commissioner.

Just look at the professional way
she's been trained to serve out a plate of BS
to Queens' communities .

Service with a smile !

Said she with a grin as she wiped off her chin.....

Maybe Nazli and Pinky have "a thing" going.

No need.....
Dennis takes what he wants
and he wants what he takes....
he's a pirate out searching for booty !

I think that our perky little
CAU Commish Nazli has learned
that she's already put enough in writing
with her original blackmail letter to the JPCA
(on official NYC letterhead) !

When is she scheduled
to "step down" from her job ?
Mayor Mike had better have a scapegoat
for his blunder in putting Natzli
at her post.

I love a Viennese table. You can pig out with total abandon.

All of a sudden we are big fans of the NYCLU? This is the same organization that fought against having police checkpoints at subway stations to look for terrorist bombers.

Mr. Christopher Dunn said"
"As you presumably know, signs and other messages at political rallies are fully protected by the United States and New York Constitutions, and the city has no power or right to suppress messages to which it objects."

Very generously classy of you, Mr. Dunn, to give this administration the "presumption" of even knowing that there IS a Constitution that governs, much less a First Amendment that in intertwined in every citizen's everyday life, from reading newspapers, watching TV, writing letters, speaking on the phone, and, on and on.

But, in NYC (and throuout the country at all levels) there is a fierce determination to destroy our rights.

Bloomberg is a vivid demonstration of current political belief that power is to be used aggressively to accomplish personal and partisian objectives. That if there is disagreement, it must be crushed. No debate. No humility. No give and take. No other ideas considered.

So, we have the coarsening of politics and governing. Civil life is raw, competative, angry strife.

Can Bloomberg change? I believe he is far too narcissistic to ever change. So, the shrill anger will continue.

It's too bad that the situation ever even required that you have to protest at all. It's too bad, that to express yourself, you had to draw the political cartoon that you made (so very well, it's now part of the history of NY).

It, too bad that Bloomberg took an oath to protect and defend the Constitution, with mental reservations. Apparently, he had never even heard of it (and, probably hasn't taken the time even now, to do so. You would think he'd actually get curious about this First Amendment stuff after all the recent fuss.)

So, congratulations to you for your contribution to the defense of the First Amendment.

Do you all still think that defending a "noose" poster is helping your cause? Is it more important for you to attack the mayor than to convince the city to your idea of turning the site into a park?

First of all, the noose poster needs no defending. The one that needs to defend her actions is Nazli. Second, preventing the government from trampling on the first amendment rights of its supposedly free citizens is definitely more important than convincing the city to turn a piece of land into a park.

Our aloof, dismissive mayor
couldn't be "convinced", cajoled,
pleasantly or politely reasoned with
for well over a year.....
to meet with the JPCA
to discuss turning the historically important
St. Saviour's site into a park.

He was out to lunch on the matter.....
and refused to listen.

Jerry's cartoon made EVERYBODY listen up......
and identified the particular perps
who were responsible for the arboricide.

Gallagher, Bloomberg, CAU's Matt Gorton
(who's now warming a bench somewhere
in the back offices of an obscure NYC legal division).

I'd say the cartoon most effectively brought to light
an important issue that our "city fathers"
had already written off.

Before.....St. Saviour's was practically a lost cause......
but now there's some real hope.

Bah.....
Gallagher's goons are still just pissed off
that the noose" cartoon did such a great job in unmasking them!

And they're still too stupid to shut up about it.

Every time they bring it up it gets more readership.

Shame on you "Parkside" people
for not putting a muzzle on your client!

I certainly am a fan of the NYCLU.....
when it comes to upholding and defending
EVERY CITIZEN'S right to freedom of speech!

Step out of your coward's shadow
and you too can speak freely without fear......
"annonymous poster #4" .

That's what our forefathers fought and died for !

I think we'd all respect you more if you shed
your anonymity.

That's the ticket.....kick that dumbo's ass!

Poor little misinformed Nazli is just an intern promoted for being a good little foot soldier in the Bloomberg fascist machine. You would think that the mayor would at least have someone experienced in that office to check her letters before she sends them. He really thinks nothing of CAU and the neighborhoods comprised of "little" people.

Under the Bloomberg administration CAU is now a laughing stock. Ask anyone, who is honest in the administration, what they think of CAU.

For instance, CAU hires Jennifer Manley.
Q: What were her qualifications for the position of Director of Queens CAU?
A: She was a poor reporter for a weekly newspaper.

A little too many sweets for the Nazli. So many empty calories on that plate that can go straight to the hips.

None of the publicity raised from the poster focused on the site. All of the attention was focused on the offensiveness and ignorance of the poster, and how it alienated and damaged discussions with the city. While you all keep patting yourselves on your backs, you are also continuing to hurt your cause and position.

Like the city would take up their cause anyway. Please, it's been more than a year and a half of playing "nice".

The letter about the poster was meant to take focus off of the city's lack of action with regards to this site. That was the entire point of the whole thing. "We have no good reason for not working with you, but finally, we found a way out."

HELLLLOOOOO!!!!! The letter was mailed out 2 months after the "offensive" rally and after Matt Gorton got kicked to CAU's curb.

The St. Saviour's issue was considered DEAD
by Bloomberg and his henchmen.
They were in the process of trying to BURY it !

The "noose"political cartoon
gave the cause new HOPE !

Don't you all just hate it when C.M. Pinky & Co.
keeps posting on this site at taxpayers' expense?

Hey Dennis....
better spend more time with your "dream team"
of defense lawyers instead of clicking the keys
of your PC's keyboard !

Bubba's waiting for you !

You must also have a lot of time on your hands
these days in the backwater....what is it (?)
legal department of NYC ?

Better not use their computers for your postings
on "Queens Crap" !

Matt Gorton is an asswipe. There is no better word for this no-talent effen robot.

My 10 year old son remarked to me at one meeting we attended that Gorton looked and spoke like a robot.

This guy has been a political hack for years.

He should try making a living in industry, then you'll see how this Bloomberg flunkie will run back to hiding in government.

He's a typical political hack who lacks any creative thought.

Matt Gorton has none....
except being on his knees
performing for his boses.

I love those "bagels" hanging from Natzli's ears.....
perfect touch for a caterer !

What happened to her waitress' name tag?
Did it fall off her dress ?