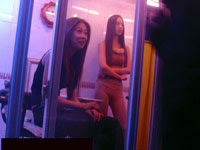 According to complaints unsealed in Manhattan federal court and in Brooklyn federal court, the investigation began in approximately May 2005, when a Korean couple who owned and operated a chain of Korean brothels in Queens, New York, attempted to bribe an undercover New York City Police Department ("NYPD") detective to protect their businesses from being raided by law enforcement. Working in an undercover capacity, the detective began accepting bribes from the couple.

Between May 2005 and March 2006, the couple paid the undercover detective a total of $126,500 in cash bribes. On March 8, 2006, the couple and two NYPD officers, who were discovered during the investigation to be accepting bribes, were arrested and charged with public corruption offenses. That prosecution is pending in federal district court in Brooklyn before the Honorable Sandra L. Townes.

The government expanded its investigation and obtained a court-authorized wiretap on the telephone of Tae Hoon Kim, also known as "Tae Won," the Flushing-based middleman and transporter. The wiretap led to the discovery of an extensive network of Korean-owed brothels, stretching from Rhode Island to Washington, D.C.

Wha?...This kind of thing doesn't go in Flushing! It's a vibrant, happy neighborhood and how dare the feds say otherwise.

Now the big question is...did they have an ad in the Trib?
Posted by Queens Crapper at 6:54 AM

Funny, they did not go through the Queens courts?

Well, the machine is correct here, the immigrants are driving force for community revitalization.

Somebody ought to investigate Ackerman, Shenkler and Nussbaum's hand all this whoredom. And where was DA Brown?

I doubt that they had an ad in the Trib after the Trib wrote the story about one of their Flushing brothels being busted in June 2006.
http://www.queenstribune.com/news/1149793405.html

Another implicitly bigoted prejudicial post on Queens Crap. And where did you grow up? Maspeth, Middle Village? I guess all the drug dealing from the mafia who lived in those neighborhoods could be blamed on the immigrants too?

Mike Nussbaum has been busy promoting sex clubs in the orient. Check it out here:

Maybe Mike was the one who provided the whores for Don Manes in Taiwan in the 80's. I've heard folks refer to him as a "whore master". Maybe they're right on target

I doubt that they had an ad in the Trib after the Trib wrote the story about one of their Flushing brothels being busted in June 2006.

Ok, how about before?

I guess all the drug dealing from the mafia who lived in those neighborhoods could be blamed on the immigrants too?

No, we just blame Mugsy for that.

Crappy smiled and winked at those who pretend that Flushing is not a hotbed for this type of thing. If anything was "implicit" it was disgust at the machine and press.

Hah. A crime did happen, more than a year ago. This happened in Aug. 2006, and was covered by both the local and citywide media extensively.

It has even progressed further since then, and again, was covered.

Way to break that one.

Anonymous:...the drug dealing Mafia do not advertise their wares week in and week out in a community paper.

HEY HEY, cool it with the dude who wants to blame racism and paint posters for what was reported by crappy( love u ) it's like blaming robert chambers neighbors on the upper east side for him getting busted! ....it's a fact and it is crime, brought on by demand ( however ) and opportunity by these smugglers to exploit...lock em up and toss the key!

BTW. I live in what I considered a very respectable building in downtown flushie. My pop lived in it since '67 and me since '88, it's on Union one block from the 7- I SEE IT ALL! and we had a new move in, a beautiful korean or chinese girl, single...had nothing but men coming in one at a time to spend some time, lived like this for two years then she was booted...for non payment of rent..

now where is Anonymous #5 going to get laid?

What about the illegal "hotels"
springing up
in single family homes in the posh
Broadway/Flushing nabe ?

The FBI closed down
a human trafficking operation
in a home where the DOB repeatedly
didn't find anything
"non residential" going on.....about a year ago !

There are currently several Asians
handing out leaflets
around the #7 Main Street subway entrances advertising....."Chinese massage....."
at the rate of, I believe, $40 an hour.
h-m-m-m-m !

And for a "special customer"
what additional features ? !!!

"The mountains are high
and the emperor is far away".

This is an ancient Chinese saying told to me
by a Chinese man
which parallels the level of illegal activity
going on in Flushing that often goes unnoticed !

I'm proud to be one of your so called "bigots"
if telling the simple truth makes me one!

There was NEVER the PROLIFERATION of......

BEFORE THE ASIANS ARRIVED
to "save" Flushing !

I guess that's the price we pay
for our "bustling & vibrant" new town!

Mike Nussbaum has been busy promoting sex clubs in the orient. Check it out here:

ANY OF YOU COLUMBIA STUDENTS OUT THERE LOOKING FOR A STORY?

Don't get excited - its just another Hillary supporter, like that one that wasted everyones time and annoyed everyone with overkill pushing that Guliani story about rooting for the Boston Red Sox.

Unless, of course, you grew up a Yankee fan -- in Chicago -- as Hillary expects us to believe.

could never understand why anyone would get with a prostitute. With all the diseases out there it's like gambling with your life.

Wasn't it in the book "City For Sale"......
where it was mentioned
that after the conclusion of a "deal"
Manes and his buddies
celebrated by having sex with whores?

Who were the "buddies" ?

We've got a pretty good idea now
who the "whore master" (or masters)
might have been!

Wasn't Nussbaum
(of the Trib's affilliate Multi Media)
also one of the culprits invollved
in the old Parking Violations Bureau (PVB)
scandal that led to Manes' suicide ?

And what was Myra Baird Herce's role ?

Was she, in some way, part of the original team?

Her brother, Bill Baird, was an early abortion
activist (when the procedure was still illegal).

Might she be (?) peripherally affiliated
in an allied field (perhaps with US/China connections) ???

Under the 2 child per family edict in China
(with a very strong preference for males)
poor mothers have been known to drown
their own unwanted (by the husband)
female offspring in wells.

Maybe the better off mothers
(after determining the sex of the fetus to be female)
seek abortion instead.

Or are these all just fantastic musings ? !!!

H-m-m-m.....
I suppose our old friend
and poster "eamallc"
would refer to this as Asian "stereotyping".

Once again, the facts speak for themselves!

I guess Flushing has truly become a "destination of choice".

If "they" went through the "Queens courts".....
the brothel owners would have probably
been "tipped off".

NEVER report DRUGS or PROSTITUTION
to your local police precinct.

The "ring" that's involved
with these illegal activities,
most likely, has someone on "the inside"
working there!

Reporting it to the Feds is a safer bet.
You won't have to be fearful
of any retaliation that way.

True.....
there were (I think) two police officers at the 109th
involved in working with a Korean madam.....
tipping her off on any impending raids!

Maybe "Connie r"....
that famous poem
should be amended to read:

That are denied to many
at our own front door....

Send these....
your smugglers
and your "snake-heads" to me.

I lift my lamp
besides the Golden
(or better make it "Golden Venture")
door.

There is a building 43-17 Bowne street in Flushing and myself and my neighbors have reported to 311 the 109th and anyone else that would listen that 2 whore houses are operating and you guessed it we are still waiting for them to get shut down,by the way this has been going on for years!!!!

Did you ever wonder who goes to these brothels? MMMM MIDDLE AGE MIDDLE CLASS WHITE MEN!!!! Dirty bastards even if you use a condom your still at risk of getting an STD or maybe even taking a good dose of AIDS home to your wives,pretty pathetic to have to pay for it don't you think:( and how do you explain it to your wives when you get sick???

In response to NWA, GROW UP AND GROW A SET OF BALLS CHILD:) YOUR IGNORANCE IS ALMOST COMICAL:)