Pinky: DA was mean to me at Grand Jury 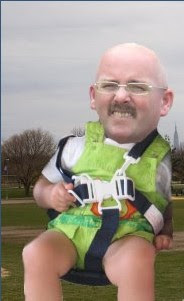 Prosecutor Kenneth Appelbaum asked Gallagher questions outside the scope of the crime - inquiring about his family, his children, and his Council job, Brafman said.

"The subject areas that were gone into extensively had nothing whatsoever to do with the crime he was charged with, they were just trying to embarrass him and undermine his integrity," Brafman said.

What integrity? And your lawyer told you not to go down to testify, but you didn't listen.

The prosecutor also violated protocol by vouching for the credibility of other witnesses, asking Gallagher what motive they would have to lie, Brafman said.

Photo from Middle Village Idiots
Posted by Queens Crapper at 5:07 AM

Dennis Gallagher is such a coward it is unreal.

He should resign and spare us from having to deal with his pathetic lunatic conspiracy theories.

Gee maybe they asked about your job and family to establish a motive. Like you're miserable at home and at work and took it out on this poor woman.

And what's wrong with giving him the opportunity to explain why others would back up the victim's story? I guess he had no answers for that.

One may well ask......
how could a dirt bag such as Gallagher
ever rise to the level of a city councilman
purporting to represent a constituency ?

It's not so surprising.

Nature dictates that pond scum begins at the bottom
then floats to the top !

Pinky represents the vilest form
of such political pond scum
that has risen to the top in recent memory.

After all is said and done......
what can one really expect
from a politician to begin with?

At best....it is a rather dubious "occupation" !

We must all take great care in the future
who we vote for and not to be mislead
by all the clubhouse hype.

And must be eradicated by throwing him in the slammer so he can be put in the shoes of the grandmother.

Then Queens & our city will be at rest.

grandma got run over by a reindeer...or councilman as it were.

There is no bigger lowlife in Middle Village than Dennis Gallagher. How do we rid ourselves from this scum?

What dont you get?

No one cares if he's a dirt bag or not...
No one really cares about "Denis Gallager the person " they only care about the money

as long as he keeps throwing money at organizations who need his money they will support him.