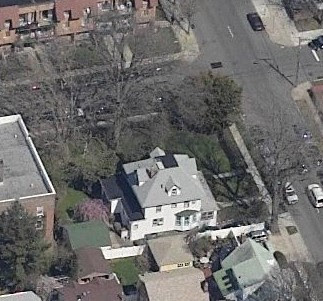 A 39th Avenue property that served as the backdrop - and exclam- ation point - for Councilman Tony Avella's (D-Bayside) assailment of a city proposal requiring property owners to plant more trees has seen its own tree canopy come crashing down.

The councilman...said the measure was inadequate because of what he described as the city's failure to maintain existing tree cover, and he had pointed to the 212-15 39th Ave. property behind his Bayside office as an example.

Boarded up by high fences, the property contains an old single-family house and, at the time of the press conference, was also home to the 100-year-old trees. They were cut down by workers at the site in the last week.
Posted by Queens Crapper at 2:13 AM

There goes another useful "hanging tree" !

I guess lamp posts can be substituted
for the proper occasion.

(That's just a joke....folks.....
and any of you law enforcement guys
who may be scoping my comment) !

Oh I get it. The greening of Queens is intended in only areas that are about to get development.

Not only does this soften a bit the moon landscape that a community under assault by developers begins to resemble, but its one a host of multimillion dollars amenities (like the 'green'way, sidewalks, etc) that are put into these communities to entice developers.

The rest of Queens? Hollowing out as a prep for the developers to move in. Chop 'em down.