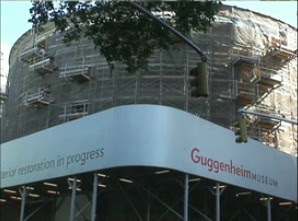 A woman walking her two dogs along Fifth Avenue recently stared up at the Guggenheim Museum and contemplated the paint swatches hanging from the northeast side of the building, high above the street.

A decorating dilemma at Guggenheim Museum

The first, a buff yellow, represents the original exterior color chosen by the museum's architect, Frank Lloyd Wright. The second is a sample of the off-white shade that, with slight variations, has been the museum's public face for years.

"The yellow one ... it looks too urine-y," she said, shaking her head. "I think Frank Lloyd Wright probably would have decided to change it to the lighter color eventually anyway."

I'd go with Wright's original choice of yellow.
(Too bad for the nabe's spoiled residents) !

I'd also approve of Wright's original plan,
which I believe,
was to site the building in Central Park.

It needs space around it to breathe.

The original color of Wright's famed "Falling Water"
was to be genuine beaten Florentine gold leaf.....
on all of the concrete surfaces.

He went for the existing buff/maize yellow
because the owners (Kaufman) couldn't afford
the added expense.

I got it... Try McMansion yellow stucco!!!

I too would go with Wright's original choice - he was probably looking at the surrounding scenery when the choice was made.

well we do have the Queens Museum, in FMCP, which has several terrifically stocked vending machines on the first floor if nothing else. :)

to many of us ignorant new yawkhAs,that building always resembled a toilet bowl,so maybe yellow's appropriate .

Wright was always right about these things. Have a little faith.