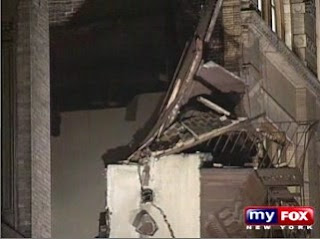 Part of a six-story building in Manhattan collapsed Saturday evening, fire officials said. However, it appears the six-story residential structure was vacant.

There was no immediate word on whether anyone was injured. The cave-in happened around 8 p.m. at 22 West 24th St. in the Chelsea section of Manhattan.

The building's facade was reportedly still standing; the rest of the structure crumbled.

Firefighters were on the scene and streets around the site have been blocked off.

NY Times has a more lengthy explanation, including tidbits about its scandalous past: Building in Flatiron Collapses, Causing a Mess but No Injuries

Oh, and by the way, this building was landmarked. So how about to make up for the loss, we designate one in Queens?
Posted by Queens Crapper at 1:16 AM

Yeah......
noted architect Stanford White
gets laid here (Evelyn Nesbitt?) and the building
meets the criteria of the LPC.

It's got "history". It gets landmarked!

I wonder where Manes had his trysts?
Should we submit a request for designation ?

if you look at the building dept. complaint listing, buildings was called because of cracks in the walls on the 15th. Great Job Building Dept!!!

at least they don't have to file with Landmarks and DOB to get a demolition permit which would have taken 3-6 months to get approved if at all.