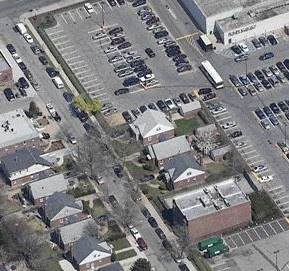 Three houses on the east side of 186th Street between the Horace Harding Expressway and 64th Avenue were approved for demolition last week amid concerns in the neighborhood that they may be replaced by much taller commercial structures.

The three houses at 61-25, 61-29 and 61-33 186th St. are built in a style similar to their R3-2 neighbors, but have as the eastern border of their back yards the Fresh Meadows Shopping Complex and its parking lot, which make use of the C4-2 zoning. The other structures on the east side of the block are real estate offices.

Alex Christodoulides of the Times Ledger seems to be the only reporter in Queens to consistently write about these issues. My hat's off to her.
Posted by Queens Crapper at 12:00 AM

Alex would have been a much better CAU choice than Manley.

it's really outrageous to begin with that they ever surrounded that row of residential homes with a parking lot on three sides. It just goes to show that homeowners are thought of as dirt by the city: to be kicked and shoved about w/o any care for their rights.

The three residential buildings and the office building on this part of 186th St. should be zoned differently than the mall's property. This is pathetic! The homeowners are being taken advantage of

It's been a long time, of course, but are we sure those buildings pre-dated the parking lot? I seem to remember them being built, and thinking how odd to build homes in the parking lot. Remember that the shopping center has been there since about 1950. Probably a few years earlier. The residents of the homes may not think so, but it seems to me more consistent with the immediate vicinity to have something commercial there.