A crap above, part 4 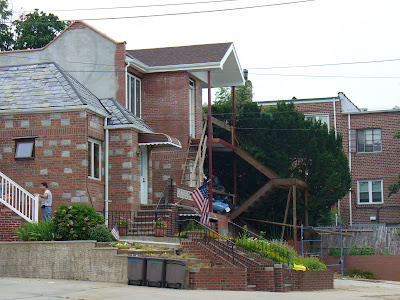 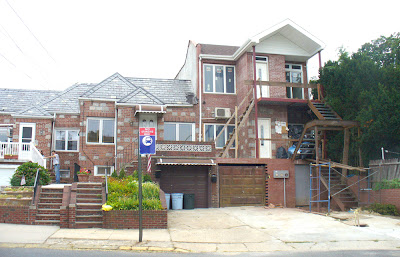 A fictional conversation at 70-18 Calamus Avenue on the Maspeth-Woodside border.

"You know, honey, instead of buying a 2-family house, let's build this one-family up another story so it sticks out like a sore thumb among the other row houses it's attached to."

"Great idea, babe. Let's post the permits on the second floor where no one will see them. After that, we'll build exterior steps that jut out above the entranceway to the first floor."

"Good thinking. In fact, let's throw caution to the wind and not erect a construction fence."

"Can we also pack the first floor with garbage bags that flow out onto the stairs?"

"Of course! I'll find an architect that will self-certify and a contractor that will use day laborers who won't mind using a rickety unsafe scaffolding."

"This is gonna be so much fun!"

Doesn't NYC have building inspectors? Ya know, the kind that review such work as, framing, plumbing and electrical work, in addition to those who check buildings are constructed according to plan?

If so HOW THE H%^L DID THIS HAPPEN? Anyone who walked on that site had to think something just wasn't right.

Also interesting is the plans weren't approved 3 times by the same person. Every-time being reexamined a few days later and approved. By another person (the same one every-time).

Have we ever investigate who approves all of this crap to see if there is an type of pattern?

They should rename the street Calamitous Avenue with this monstrous eyesore on it.

This is unbelievable. It looks almost like a treehouse.....

It just goes to show that that is really something stinky going on at DOB.

Perhaps if the complaining residents
were to offer a larger bribe to the DOB "inspectors"
than the property owner might already have.....
then there would be some results!

Until that day comes.....
DOB works mainly for the developers
and will rubber stamp most of their work "OK" !

Yup, just bump it up and bring it out.

the garage level is clearly a basement and not a cellar. Therefore it counts as floor area...thus this enlargement clearly exceeds the max. floor area ratio for this property and this building is overbuilt and should be cut down to its proper height! Please DOB get some qualified plan examiners and commissioners!!!!!!!!!!!

Well we thought we've seen it all!

Do we still have a DOB?

These row houses should be protected from a neighbor building such a monstrosity next door. There should be code written to disallow this crap. This particular strech has seen more than it's fair share of new build crap.