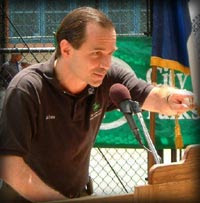 Bring on the bulldozers!

Parks Commissioner Adrian Benepe delivered a shock to nature lovers and community activists last week when he said the city is planning to level more than 20 acres of dense forest in Ridgewood Reservoir to make way for recreational facilities, attendees of the meeting said.

Benepe told the Daily News on Friday that the $46 million plan is not a "done deal" - but then spent several minutes explaining why recreational facilities are needed at the site.

"We have a very strong obligation to provide sports and recreational facilities so that kids can get exercise and avoid problems like diabetes and heart disease," he said.

Benepe said the city has a shortage of "first-rate" recreational facilities, and said Queens is "blessed with thousands of acres of parkland that is mostly natural."

But community activists said replacing more than 20 acres of forest with AstroTurf sports fields contradicts Bloomberg's much-publicized plan to plant a million trees in the city by 2030.

"These are really accidental landscapes that have grown up out of lack of maintenance and lack of use," he said.

Take a gander at this hypocrisy: NYC's Urban Forest - It's Our Greatest Environmental Asset
Posted by Queens Crapper at 9:53 AM

You cannot take care of playground that are out there already.

So you want to add more.

the green space in Queens might be compared to Adrian's hair. It's receeding rapidly.

The astroturf that's going to be put down, in place of the forest, is also a lot like the toupe that he'll probably be getting soon. This step has been taken by many other officials, set on pulling the wool down over our eyes as they continue to bulldoze the borough with prompting by developers.

I spent this afternoon hiking around Highland Park and the reservoir site. The 146 acres currently open to the public are a complete shambles. Almost all of the light fixtures on the jogging path around the reservoir are busted, the stairs in the park are crumbling, there is garbage and beer cans all over. Some nut is chopping down trees. If there is $46 million available it is needed for park rangers and maintenance on our existing facilities, not trucking in millions of tons of dirt to fill in the basins and build new monuments to M. Bloomberg. Leave those 50 reservoir acres wild.

What an absolute fuc@#$%moron. "Accidental Landcapes", is he kidding or what. What difference does it make? Its there now, and nature has taken over as it should have and always will. The idea that its somehow not legitimate, because its not created by man or the parks department should give you some glimpse into the mindset of this pinhead.

Adrian Benepe was a no-talent ex-Park Ranger who was promoted for being an ass-kisser.

This project smells like a legacy project for Bloomberg. Why not fix and spruce up the existing public areas instead? 46 mil to destroy trees?

Use the money to start the construction of a park on the Elmhurst tank property already! This property has been sitting waiting for development. It won't cost 46 million - the city has let the weeds grow as high as trees - great for us with allergies!

Hey, where is the Muni Art Soc, or the City Lore folks,

its in Queens and its not about immigrants?

Adrian seems to be suffering from "Robert Mosesitis" - if the tree wasn't planted by him, or if the land is "undeveloped" then it's of no use to him.

Hey.....
Adrian wants all those trees cut down
so there won't be one standing to hang him from....
heh, heh, heh !

A basketball hoop will do.....he won't get off that easy.

basketball hoops are strictly out, at least in the playground where my buddies and I play.

The Benepe legacy so far:

#4. the use of more concrete

maybe for #5 he'll have the lakes in FMCP filled in. Nothing would surprise me at this point.

Nah.....
one of those is reserved
for the annual dragon boat races....
a real "world class" attraction.....yawn!

going to see the dragon boat races would probably put me to sleep too. From a conceptual standpoint, though, the event is neat: involving creativity to design the boats and a good deal of physical expenditure to propel them. At least it seems so from the enjoyable 10 second clips on NY1 News I catch each year.

Go and take a look at some of the Latino
soccer matches in FMCP.
Now there's some strenuous activity and real skill.

But....oh.....we Latinos are the under class.....
the under appreciated when compared
to our Chinese "brothers and sisters".

Why is that?
We don't kick back enough money in political campaign contributions do you suppose
(even though we match them in population numbers) ? !!!

you might try painting pictures on the soccer balls to draw attention to the tournaments in FMCP. Just joshing with you. Soccer is probably one of the most physically demanding field sports there is. I get tired just watching the game.

I see a contest brewing.

What happened to the proposed golf course in Throgs Neck??