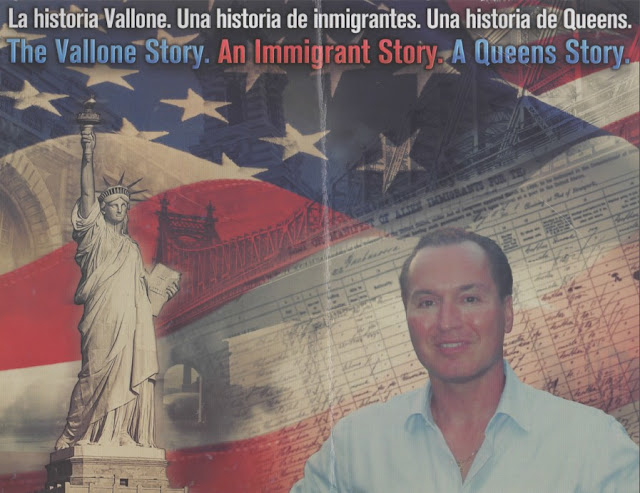 What can be said about this Photoshop nightmare?  Too many layers of stuff here.  The American flag, the Statue of Liberty, an Ellis Island ledger and not one, but two shots of the Queensboro Bridge.  We're laying it on a bit thick here.  On top of all that, a Vallone with some kind of blotchy skin condition, slicked back hair and his shirt open, revealing a gold chain.  Is this what turns on Hispanic voters?  I don't think so. 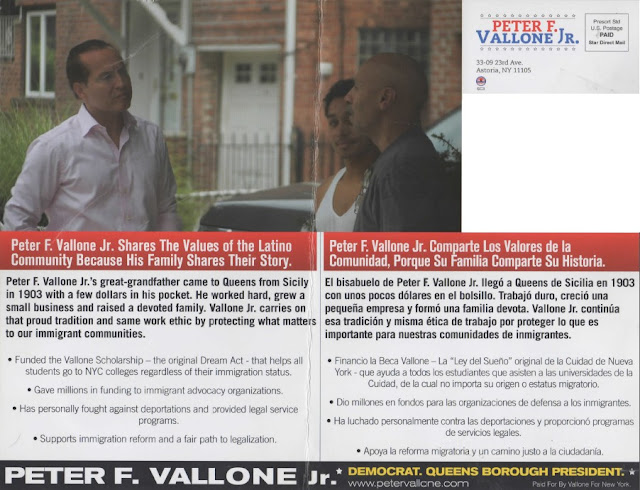 And here's a photo of him actually talking to them, too!  Somehow I doubt that this conversation resulted in them telling him that their number one concern was funding for the Vallone Scholarship, but that's the first bullet point under "what matters to our immigrant communities."

It seems to me that immigrants aren't so much concerned with what the Borough President can do about immigration reform (which is nothing) as they are with making sure their kids get into the local school and that the neighborhood is clean, quiet and safe.  Just like what the native population wants.  And why the focus on keeping people labeled as "immigrants?"  Immigrants don't vote.  American citizens vote.  Once they are naturalized, most non-natives I have come in contact with say, "I am an American," not "I am an immigrant."  If you're sending this out to voters, they are American citizens.

The worst I have ever seen in my life (all 75 years). Tacky, tacky.

Still cannot believe the Tribune whoring for this man with their front page picture of his cheap effort to rename the Queensboro Bridge, renamed by the same administration that was in power because he overturned term limits.

Crappie, you're the best!!! I was laughing my ass off. Vallone's are so desperate they are going for non-voters.

What's the big surprise?
The Tribune whores for anyone who pays them.

Michael Nussbaum, Donald Manes' old "bag man"
(as he's been referred to in the news media) happily deposits their checks.

How much money are you making from the Vallone family, Mr. Apelian?

Isn't it ironic how many former racists, have suddenly turned to becoming "soul brothers" with the "darker" folk just to get votes?

Wow, Peter Vallone's ancestors were immigrants? So were mine! If he's qualified to lead the borough because of this, than so am I.

Go to Vallone's political club and you see 50 members with 40 vice presidents and an average age of 75. Many knew his grandfather.

So much for embracing change.

Astoria is NOT a place that embraces change which was a good thing in 1970 when the rest of the city was going to hell and a bad thing today.

What?! No sombrero? No maracas?

Appealing to non-voters? As a poll worker we called that ballot stuffing.

Hey,
Don Chooch "junior" Vallone...I think the voters got your number! You're a #1 phony!

Between Vallone and Van Bramer, western Queens is being sold out to developers.

They paid for Pete and Jimmy's campaigns.

AVELLA FOR BOROUGH PRESIDENT, or it's from the frying pan into the fire!

Pete Vallone cannot even keep the street (31st under the el) in front of his office free of abandoned shopping carts and old furniture. He can care for an entire borough? NO vote from me.

That's not Vallone's office.
It's really the "Il Duce Social Club", where the don grants favors to enhance his political strength.

It's also a drop off for developers' cash.

They serve a good espresso and canolli in return!

After reading all this shit about himself...
little Petey won't even be able to control his own bowel movements.

Those were a nice pair of Gucci loafers.
Get some soap and water before it all hardens.

Obviously photoshopped to give him Hispanic features. Skin color, eyes, and slick hair....despicable!!

The fact of the matter is these two bit hoods are running an excellent campaign.

Katz and Avella are laughable in comparison.

How are they running an excellent campaign? By flip flopping on Flushing Meadows, pandering to non-citizens and talking about things most people no longer care about, like the name of a bridge?

An immigrant story? The great granfather came here as an adult in 1903. One hundred ten years ago! He must have passed away before this guy was even born!

This disgusts me. If he had any self respect for his ancestry, the immigrants who came over here (like my dad) had to learn English. There were no signs translated into Italian. This guy is a disgrace to anyone with immigrant parents.