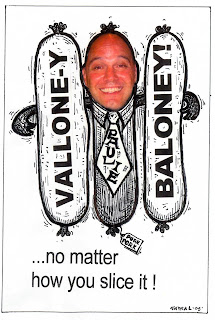 Paul Vallone’s bio on the Sacco & Fillas website notes that Vallone & Vallone “can get you through the door from staff to principal,” and indicates the real value of the Vallone name: influence. Indeed, the actual family business since Peter Vallone the Elder left politics has been lobbying city government on behalf of a variety of clients through the firm Constantinople & Vallone.

Paul Vallone doesn’t say it anywhere in his campaign information, but he is officially registered as a Constantinople & Vallone lobbyist, along with his father and his brother Perry. A number of Paul Vallone’s major campaign contributors are among his lobbying clients. For instance, Deborah Gaslow of Boca Raton contributed the maximum $2,750 to the campaign. Ms. Gaslow is the wife of Peter Gaslow, owner of furniture maker Empire Office, which has paid Constantinople & Vallone $40,000 over the last 18 months.

The owner and senior employees of Mega Contracting have donated more than $3,000 to the campaigns of both Paul and Peter Vallone, Jr., while Mega Contracting has paid Constantinople & Vallone $240,000 in fees since 2010. Mega Contracting, incidentally, has been awarded contracts for the construction and rehabbing of a number of municipal projects, including NYCHA houses, MTA station upgrades, and work on schools, police precincts and city hospitals.

So Paul Vallone has represented these folks as a lobbyist, and hopes to continue to represent his former clients when he takes office. Seems like putting the cart before the horse, doesn’t it? The usual trajectory of a political career is first to be a public servant and eat bread from the sweat of one’s brow, and then after a time to leave office and cash in as a lobbyist. Paul Vallone is reversing the typical course of a political career, starting out as a lobbyist, and then seeking elected office! It looks as though the revolving door revolves both ways.

Well this contradicts Paul Vallone's assertion that he was never a lobbyist, doesn't it?

Let's recall the last time he ran for office:

If this sounds like the same evasive answer he made back in June of this year, you're right. Except the second time he didn't accuse audience members of being related to Jerry Iannece.
Posted by Queens Crapper at 12:52 AM

Yup, just like the last debate, his standard dance around the question except the audience in the video had the balls to yell out "you didn't answer the question!" the audience at the recent debate just sat there with their mouths open and waited until debate was over and he was gone to say "he didn't even answer the questions". Makes we wonder, how stupid my neighbors must be with those Vallone lawn signs.

Crapper already posted Graziano's palm card as well as Chrissy's and Duane's. It's only Austin and Vallone that have sent out mailers that I know of so far.

Furthermore, how is posting this story leaning in favor of anyone? It really happened and it has to do with overdevelopment, which is what this site is about. This isn't some made-up issue that someone used to get their name in the paper.

Busy day over at county headquarters, I see.


Please feel free to take a look at my website at paulgraziano.com.

There's a ton of my "literature" there (which would be all of the news pieces and issues that I've been involved in over the past 15 years) and you can compare my accomplishments to the other candidates in the race anytime.

1. looks like he is about to break out into a Tony Bennett song

2. you not in Astoria my friend: these people do no have ties to construction, are not peasant stock, and have the ability to think.

The reason this piece is up is because Paul Vallone is continuously lying about his status as a lobbyist.

For those who don't know what a lobbyist is, here's the textbook definition from Princeton (http://wordnetweb.princeton.edu/perl/webwn?s=lobbyist)

Noun
•S: (n) lobbyist (someone who is employed to persuade legislators to vote for legislation that favors the lobbyist's employer)

If I was a lobbyist running for office, I would play that up. Here you have someone with years of experience dealing with different levels of government, who knows all the players already, and should be able to navigate the system better than other newbies can. He could also say something like, "I have a proven record of working my tail off for my clients, which is what I will do for my future clients - my constituents." Instead of using his past to his advantage, he's lying to the voters and denying the undeniable. Makes you wonder how effective he was as a lobbyist.

Constantinople and Vallone actually has a pretty shitty track record these past few years. Both the mayor and speaker now hate them, and it hinders their ability to get results for their clients. If we have a Mayor Quinn (and unfortunately, that's looking more likely with the latest Weiner revelations), are we going to want Paul Vallone in there? The 19th should be prepared to be dead last in funding for years to come if they go with the Dr. Evil doppelganger.

Vallone was a lobbyist
for Constantinople.

Not Istanbul,
but Constantinople...

Yes indeed--
Vallone is slicing the baloney very thick these days!
You might even say--LOL--that he's on a roll!

Great video! So very incriminating. Shows Vallone for the cheating weasel he is. This should be required viewing for all residents of the 19th council district. Let's hope it goes viral.

Watsamatta goombah...
being a lobbyist isn't enough and you're also into ambulance chasing?

My wife just related an incident to me (which I'm first hearing about)...an encounter that she had with Paul Vallone at a public meeting.

He inquired how a family member was doing with a medical issue. How "nice" of him. Then he offered his legal "end of life planning" services.

Is that not low down "ambulance chasing"?

Anyone but Vallone for lawyer or city councilman.

The only answer is to reduce the power officials have over the private sector. Period, end of story. The founders knew this. We forgot.

"Now more than ever" ...Paul Graziano for city council!

Paul Vallone must think the voters are extremely stupid to believe the lies he's been preading.

The voters might have their heads in the sand occasionally, but they're not totally dumb.

If political mafioso-real estate industry lobbyist, Don Paulo, starts out with a series of bald faced lies about how he cares...and telling tall tales about his accomplishments regarding neighborhood preservation...imagine how he'll butt f--k once he's elected.

Be afraid...be extremely afraid if he wins the election.

Your quality of life and your home's value is at stake.

"Don" Vallone still has his eye on a judgeship if he loses his bid for the council seat, via a circuitous route.

One thing is certain...
do not fall asleep with "the don" in your bedroom, or you'll wake up with a very sore ass.

Listen carefully...Vallone's answer is , YES...though he tries to circumvent that pointed question from the audience.

If his daddy (Pete senior's) law firm are registered real estate developers' lobbyists...then his son Paul, being a member of that SAME FIRM, is a lobbyist too!

How dare he insult the intelligence of the voters with his lying tongue?

You have GOT to be kidding.

Chrissy was the chief of staff to Dan Halloran. You know, your Councilmember, the one who's going to prison for up to 45 years?

That in itself isn't necessarily an indictment of her "experience" but she was involved in a lot of the nonsense in that office - especially the "girlfriends" that he gave staff positions.

Chrissy also knew about the harassment and intimidation that Halloran did against neighborhood people - and chose to do nothing about it.

Not a leader. Not honest. Not someone I'm going to vote for.

She's learned everything she knows about being a council member at the knee of Dan Halloran!

You mean on her knees, don't you?

Dan even gifted her with a pair of official Republican party knee pads her first day on the job.

Please stay focused on the issues. The Chrissy comments are slanderous and false fabrications. Bottom line is voters need to know Vallone is a lobbyist and Jobs4NY are disgruntaled Real Estate Developers. For many years our civics fought to downsize and change zoning laws to protect Dist. 19 from becoming overdeveloped. If Vallone is voted in, we can all say goodbye to our "little slice of surburbia" and call Dist. 19 Astoria. Ask yourself, your family and friends why Real Estate Developers contributed $134,000 to his campaign. What's in in for them?

If Vallone is a crook, and he probably is, he's home with Sacco & Fillas, the biggest crooked lawyers in tow.