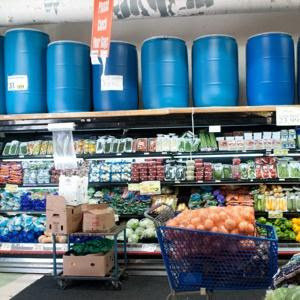 Food stamps are paying for trans-Atlantic takeout — with New Yorkers using taxpayer-funded benefits to ship food to relatives in Jamaica, Haiti and the Dominican Republic.

Welfare recipients are buying groceries with their Electronic Benefit Transfer (EBT) cards and packing them in giant barrels for the trip overseas, The Post found.

The practice is so common that hundreds of 45- to 55-gallon cardboard and plastic barrels line the walls of supermarkets in almost every Caribbean corner of the city.

The feds say the moveable feasts go against the intent of the $86 billion welfare program for impoverished Americans.

A spokeswoman for the US Department of Agriculture’s Food and Nutrition Service said welfare benefits are reserved for households that buy and prepare food together. She said states should intervene if people are caught shipping nonperishables abroad.

“Everybody does it,” said a worker at an Associated Supermarket in Prospect Lefferts Gardens, Brooklyn. “They pay for it any way they can. A lot of people pay with EBT.”

Customers pay cash for the barrels, usually about $40, and typically ship them filled with $500 to $2,000 worth of rice, beans, pasta, canned milk and sausages.

Workers at the Pioneer Supermarket on Parkside Avenue and the Key Food on Flatbush Avenue confirmed the practice.

They said food-stamp recipients typically take home their barrels and fill them gradually over time with food bought with EBT cards.
Posted by Queens Crapper at 12:02 AM

The entire food stamp program is so abused!

Check out the Asian markets - everyone uses food stamps and drives a Mercedes!

This has been happening for years and now it's becoming a story? I live in Forest Hills and the Met and Key Foods here all have the same cartons and shipping boxes. Just walk in and you see it daily.

What local hub and main transporter's are shipping these barrels and how is food in the same containers getting through customs ? ?
This scam has "Obummer" written all over it.
To help country's like that you need to ship water or drinks spiked with birth control because people can control themselves.
I been to Trinidad, DR and St.Croix 2 words: "holy sh*t" what nasty ghettos outside the fancy hotel walls.
I used to go down to the Islands to work and escape NY winters.
I couldn't get small electrical parts and meters shipped from NY and through customs.

How are these criminals smuggling all these big barrels and boxes ?
It has to be an inside job between all the corrupt governments !!!

BTW: I was doing electrical wiring after Hugo and shot at in St.Croix for not hiring the local "savages". These people were not fit to operate a screwdriver let alone read a diagram.
They hated us and steal our tools, the cops then started showing up demanding $$ for protection if we didn't hire locals.
Why should hard working American taxpayers $$ fund such useless savages most who do nothing but drink, smoke dope or fornicate all day ?

The amount of money being spent on the welfare program is nothing compared to the billions doled out in corporate welfare to companies making record profits every year.

At the end of the day - this is food which is going to feed people who are needier than we are in the US. It's the developed world's moral obligation to feed the hungry worldwide because Americas wealth was built on stolen lands and forced (slave) labor.

Eat the rich and feed the poor. Thats what should be happening - but everyone thinks they'll make it to be the 1% some day - what a joke. Welcome to neo-serfdom where the wage slaves cry foul when some rice grains are dropped in a beggar's bowl.

Yawn with the corporate welfare shit.

The United States wasn't stolen from anyone. Everyone on the planet can trace their ancestry back to eastern Africa. But certain people think that those who happened to infiltrate the western continents before white folks, were here the whole time and somehow entitled to stake claim to the land. Try learning a little history. No one people stays in one place forever.

We already spend BILLIONS of dollars on foreign aid to feed people in other countries. If people here can get by without needing food stamps, then we need to identify who they are and stop giving it to them.

Here's what gets me...slavery was commonplace throughout the world and in some areas still exists. Yet the only thing people ever talk about is slavery in America. Why is that?

solution: stop handing out food stamps to illegal immigrants. stop giving them cash benefits, housing subsidies and medical insurance for free via the jackpot babies. when an illegal immigrant gets a food stamp card they do not get fingerprinted and photographed, the way an American Citizen does. half the time the people working at the welfare office are from these countries and are in on the scams. Don't feed them, don't house them, deport them back home.

This is being done out in plain sight. There are senior citizens who get $50 per month in food stamps and who have no money for groceries. Stop giving illegal immigrants food stamps.

what about the fact that white & black Americans can't get employment because the illegal immigrants are working for 1/2 the money? and being handed government benefits at the same time.

Forget Caribbean, have you een how hard Nigerians work? Bring them in to dilute te lazy bums we got here.

When Cromwell beheaded the British king, his sidekicks founded Virginia, exaggerating the sence of nobleman entitlement to extremes. Cromwell returned the Jews to England, but when the Kings returned, Cromwell's followers became the Puritan Pilgrims of Thanksgiving, who converted the British Civil War into the American one. When the Cotton Gin was invented, slavery became an industry, with slaves treated the way we mechanize farm animals today. It was only for those two generations that American slavery was the most brutal in the world. See Fisher, Albion Seed.

We need to make food stamps and welfare harder to get! These illegals and foreigners only come to nyc because it is the food stamp city of the country!! We need to stop aiding them!!

It sucks bad to see the minorities not get enough of it, while those from other countries purposely get pregnant to be citizens and gain faster a safe area to live in, public assistance, house/housing and the works. As if the many hispanics and African American people did not work hard enough for it. America has a favorite and all because they thought of certain races as more to their level of intelligence than that of others. Each race has their goodie goodies and satanistic worst individual(s), but what concerns me is the fact that people are ignorant or plain good hearted. Tie the tubes of the Chinese and any Asian race or Caucasian race who are aiming to subjucate other races. People do not even know what goes on with the Bronx public assistance clients. You have to tell the employer your disability, nine to five on the computer job searching or fixing your resume, speaking to job developers or dress for success referrals, mock interviews, fifteen minutes break twice and one hour break lunch. Now in all that and Documentations for absences, recertification and welfare center appointments, how is a person with sciatica or the such supposed to accept a job that requires standing for long periods of time? You are made to take it, or accept the "reasonable accommodations" or end up doing nothing for some months. The only way out is to do free training programs, go back to school or find the job on your own spare time. Most people I know have told me that they were cut off from public assistance immediately after they started work. They had to go for a fair hearing and won the case. What are these people to do? Where are the suitable jobs for such people? Or should the government just become an eternal husband providing for the wife silently? Minorities ancestors have worked long and hard, just like any other race. The migrants should be made to interact with other races, work (but not together) and live within those places.