Bring on the bioswales! 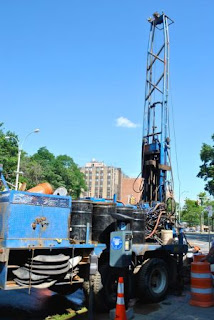 If you have driven around Rego Park, Forest Hills or even College Point this week, you may have noticed large blue trucks drilling into the roads.

These trucks are not repairing street damage or straightening sidewalks, they are being used for geotechnical investigative work in preparation for citywide bioswale installations.
Bioswales are landscape elements designed to remove pollution and minor flooding from storm water runoff.

They consist of a drainage course with sloped sides. Vegetation and compost fill in the space.

“Essentially they are a measure of keeping storm water out of waterways,” Department of Environmental Protection spokesman Edward Timbers said. “They won’t solve the problem entirely but are more of an added measure.”

While these installations will improve street drainage, they are not designed to prevent street flooding, a problem many residents of Forest Hills, Maspeth, Glendale face.

With the new system, storm water is absorbed by the sandy soil that sits on the swale surface and seeps into the ground underneath in a process called infiltration until it reaches a stone layer underneath.

The water is then absorbed by the trees and vegetation in the swale where it is then released into the air as water vapor in a process called evapotranspiration.

Over the next few years, at least 100 of these swales will be placed throughout the borough. Together, they are expected to reduce the amount of runoff that filters into Flushing Bay.
Posted by Queens Crapper at 12:01 AM

They will only become trash receptacles like the ones near Rego Center and Horace Harding. Do we really think the city will be cleaning and maintaining these "Bioswales" on a regular basis? Yeah, right.

city should crack down on property owners who pave their front lawns. this adds to the flooding problems in queens. give 'em big fines. use fines to fund further crackdown.

Like bike lanes, building next to superfund sites and floodplanes, and destroying sidewalks with 1000s of trees, we are wasting money trying to shoe-horn people into a community that does not have room.

Stopping the illegal paving of property would do more than spending tax money on Bioswales.

Ditto the comments about the need to enforce the laws re paving front & back yards. A law against it was always on the books but, as usual not enforced. Then several years ago, in response to flooding issues, Tony Avella sponsored a new law promising enforcement. Still nothing happened. WHY NOT?! Instead of expensive infrastructural reconstructions, etc., start with the prime cause---no open ground to absorb the rain. On my block, after 3 minutes of rain there's a torrent of water rushing by, because there's absolutely NOTHING to slow it down. And all the properties have become parking lots. Get after these guys--issue the fines till they break up the concrete! And I don't know about other areas, but here in Maspeth not a single cicada was heard. Mayhaps they were all paved over? Staten Island, I heard, reported some, but that's a relatively less developed borough, so that's probably why. So aside from the aesthetic, it adds to the environmental problem of runoff by destroying the backyard mini-habitats that our birds, squirrels, and insects depend on for their very lives.