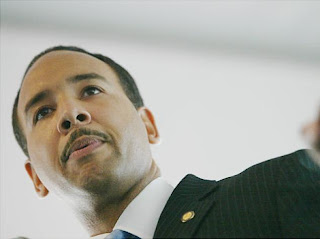 Borough President Ruben Diaz Jr. may want a soccer stadium for the Bronx, but forget about sacrificing any parkland for it.

“I do not think that using public parkland is such a good idea,” said Diaz, who would still love to see an arena built in the borough for the NYC Football Club, a Major League Soccer franchise still vying for a home in Flushing Meadows-Corona Park.

Wow. Why is it that on this side of the water elected officials think that building stadiums on parkland is a great idea?
Posted by Queens Crapper at 12:15 AM

Probably because of the mets.

Comrie says mls in fmcp ain't happening. Can we believe him?

No problemo, if we abolish the office of borough president.

They represent developers...not you and me.

If you must cling to the illusion that we'll have no voice in city hall without them...ask yourself this question, "Do we have a voice with them"?

There is plenty of private developable land in Queens with great transportation that could support a soccer stadium.

These greedy bastards just want free park land to make their billions from...