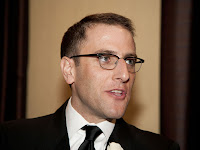 Seth Pinsky, the long-time head of the city Economic Development Corp., will be leaving his post at the agency to join the real estate investment firm RXR Realty, the company announced on Tuesday morning.

The city said Kyle Kimball, currently an executive director at the agency, will serve as as Mr. Pinsky's successor. Mr. Pinsky will stay at the agency until August.

"Seth Pinsky has been an exceptional public servant," said Mayor Michael Bloomberg in a statement. "We're going to be counting on [Kyle Kimball] as we sprint to the finish over the next 168 days, and I have no doubt he will succeed in managing some of our most important projects."

Mr. Pinsky, a stalwart of Mr. Bloomberg's economic development agenda for the past five years, will lead a new arm of RXR Realty that the company said will focus on investment in developing New York markets.

He leaves behind a big list of failed legacy projects.
Posted by Queens Crapper at 12:11 AM

He was appointed by Bloomberg and did not do much of anything except window dress for a millionaire. He is a very rude man with a pea brain.

Who is this ugly dude?