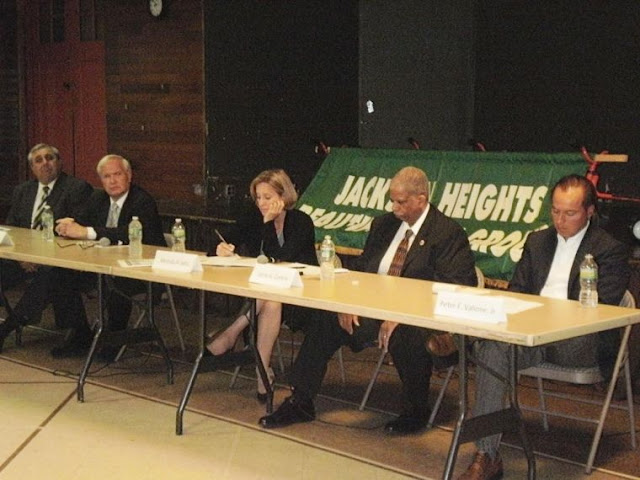 The topic of the night was sustainability but it shifted briefly when Avella accused Vallone of receiving assistance via text messages from volunteer supporters at the forum at Community Methodist Church.

Avella later said he didn’t accuse Vallone of cheating, but thought Vallone and another borough president candidate, Councilman Leroy Comrie (D-St. Albans), who also had his phone out, should put them away.

“Even if you aren’t getting texted the answer, it’s rude,” Avella said at a later interview. “You are supposed to be listening. We were taking questions from the audience.”

Vallone said that he was tweeting and arranging with his daughter how she would get home.

“I would rather be engaging with the public [via twitter] than listen to Tony,” Vallone said during a later interview.

Wait...was he texting his daughter or engaging with the public on Twitter?
Posted by Queens Crapper at 12:11 AM

The go to Vallone excuse. Always something about their kids. I swear these guys are pimps and they pimp out their children all the time. Didn't Paul need to go first because of his kids soccer trophy? Peter has been using his kids for years. One of them has graduated over 20 times. It's the running joke in astoria.

Throw these bums out quick!

Not for nothing, but just because you don't want to hear your opponent speak doesn't mean you should be rude to your hosts. The Vallone boys apparently never grew up. What a difference from how the father behaves. He'd never want to appear like something was more important than he audience he was in front of. I guess this is a precursor of a Vallone borough presidency?

One word sums up Vallone: chooch.

Eliminate the position of Borough President!!!
It's a waste of $ millions. We don't need one!

That picture speaks volumes, if this is how Peter Vallone behaves during a debate it will only get WORSE if elected. Very bad manners!!

Can't believe these people would think it is okay to take care of personal matters in the middle of a debate.

The Vallone brand doesn't wear well outside of Astoria.

There Peter posts a picture of his kid's graduation on Facebook and gets 95 likes and 30 'how adorable' comments. You just want to gag over their sense of entitlement.

Beware those Vallone signs in College Pt and Malba though.....they always find the right element to pander to..

Funny how Avella and Vallone are both Italian ... but couldn't be more different. I have to admit that Tony loves publicity (too), but he always puts his constituents first and uses publicity to support the causes that he's fighting for. Not quite sure whom Vallone puts first, but it's not the public.

Says much about both Vallone and Comrie, both who would make horrible Queens Borough Presidents.

Well, it looks like Mr. Comrie is now out of the picture.
http://cleanupjamaicaqueens.wordpress.com/2013/07/13/councilman-leroy-comrie-drops-out-of-queens-borough-president-race/

Vote for Vallone. landlords and developers - Get the whole package. Perhaps you will get lucky and get Curtis also.