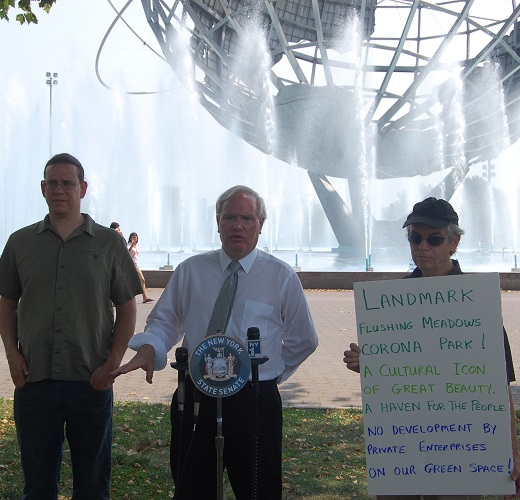 The 1,255 acre Flushing Meadows-Corona Park is the Borough of Queens’ most prominent park and provides open space and recreational benefits to thousands of borough residents and low and middle income families. The Park is a valuable asset for the City and the residents of Queens not only because of its green space and natural areas, but also due to its embodiment of historical structures and leading cultural and educational institutions. The Park also has a unique history, serving as host to two World Fairs in 1939 and 1964, plus hosting the General Assembly of the United Nations from 1946 to 1950.

That is why, earlier this year, Avella asked LPC to review landmark status for Queens’ most prominent and historic park, which is under the threat of devastating development interests. Currently, the Mets organization is floating the idea of building a Mall in the park, the United States Tennis Association is proposing to expand and Major League Soccer is still interested in building a stadium that would further eliminate parkland.

Unfortunately, LPC recently denied this request and indicated that the park did not meet the criteria for designation.

“Parkland is sacred,” continued Avella. “The City should not be entertaining these proposals which would radically reduce open and recreational space for the hundreds of thousands of Queens residents who use this park on a yearly basis. Instead, the City should landmark this vital borough park to ensure its continued usage for generations to come and send a clear message that parkland is not for sale!”

“That is why I am calling on the Landmarks Preservation Commission to immediately reconsider their decision and demand that they hold a public hearing on this important issue. At the very least, the residents of Queens deserve to have their voices heard,” concluded Avella.

I guess the only surprise here is that the Parks Department turned the Unisphere fountains on a full month before the US Open.
Posted by Queens Crapper at 12:24 AM

great historical write up--I did not think anyone remember any of it--however, in today's world, no body cares. if it helps to stop developers, no one remembers that the fields south of here is the aqua filter for the old Jamaica water company, which is still in use today by d.e.p.-----hope it helps

Does anybody really know?

To the best of my knowledge--based upon almost 30 years experience as a historic preservationist--THEY DON'T REALLY HAVE ANYTHING that's boilerplate--beyond a few "loosey-goosey" generalities, that they can spew on cue, when needed.

Find me a copy of LPC's written, codified "criteria", and I'll buy you a beer.

Is their "criteria" based on the whim of the moment--what's best for future over-development?

It seems to me that decisions are made at "the gate" (not at the top)--as to what meets LPC's "criteria"--by their director of research--"gatekeeper"--Mary Beth Betts.

Why should Mary Beth bother the rest of the "busy" commissioners with any "troublesome details"?

Betts and Chairman Tierney run the LPC show.
The bobble head commissioners are merely there to nod in approval of Betts' recommendations.

For once I agree with the LPC.

FMCP is not a premiere park.
It's a reclaimed dump and former fair grounds site.
Forest Hills Park is Queens' signature park.

Enough grandstanding in an election year.
Pulling requests for landmark status out of a hat at the 11th hour, to prevent development, has rarely worked.

Who the hell are these Landmarking people to make such big decisions? Do they even live here?

Why landmark a park that falls under the category of "crap"?

LPC don't give a crap...except to crap all over Queens!

Who appoints the LPC members? are they connected to developers?

The problem is that those that want change are so inept or timid that nothing gets done except leaving a trail of broken hopes.

The solution here is clear: the Landmarks process is broken beyond repair.

It should be overturned.

Once the 1% is thrown out on the street with the rest of us, Landmarks 2.0 will be very very different.

Where is that? Do you mean Forest Park, where all the gay pickup sex and rape happen?

No private development, only public nuisance. Will these utopians ever open their eyes?

FMC Park would be a "haven for the people" if they station about 1000 Robocops in it with discretion to blow up the bad guys.

There's a hundred years of ashes there, so we can use it to make concrete

Too little, too late.
Why are politicians always late to the party?

It's Really there for the benefit of Forest Hills, so I sarcastically call it "Forest Hills Park".

There are more violent incidents occurring in FMCP.
It must be because the local natives that use it.

Gay pickups are better than having drunken Latinos screaming out, with a sucking sound, "chika, chika"!

Even Central Park scores a few assaults and rapes.

FACT:
Any unpatrolled (and patrolled) park is dangerous without a loaded PPK in your pocket.

Since many parks are becoming rape land...
maybe filling up the wilds of FMCP with soccer and tennis activities is a good security idea after all.

Drive those restless tribes out of it!