Explosion and evacuation of Chinatown building 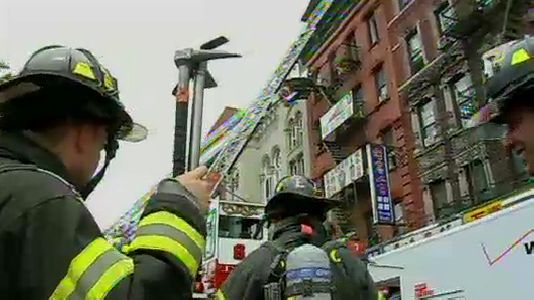 Fire investigators are looking into the cause of an explosion and partial collapse that injured nearly a dozen people Thursday in Chinatown.

It happened shortly before 1 p.m. inside a ground-level beauty shop located at 17 Pike Street near the Manhattan Bridge.

The fire department says at least eight people were being treated for injuries, three of which are said to be serious.

All were taken to area hospitals.

Witnesses at the scene say they first heard an explosion and felt the ground shake around the five-story walk up.

All tenants have been evacuated as a precaution.

Fire officials say the building had several violations on record.

Sources say a common pest control tool could be to blame for a fiery explosion and partial collapse of a building in Chinatown.

Sources tell NY1 that fire officials are looking into the fact that several bug foggers, commonly known as "roach bombs," were found at the site of the Pike Street building.

Check out its past history here and here.
Posted by Queens Crapper at 12:18 AM

Yes....Chinatown....where safety rules mean nothing and life is as cheap as bean curd.