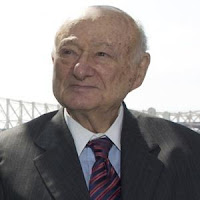 Just five months after Ed Koch’s death, a Queens lawmaker is seeking to erase Hizzoner’s name from the Queensboro Bridge.

“Never in a million years would they think to rename the Brooklyn or Manhattan bridges,” Vallone told The Post. “But for some reason, it was OK to slap Queens around.

“I’m not going to rest until it’s rectified, until we get our bridge back.”

The span, built in 1909 to connect Midtown to Long Island City, was renamed the Ed Koch Queensboro Bridge in 2011 to celebrate his 86th birthday.

Back then, Vallone helped Queens residents circulate a petition against Mayor Bloomberg’s proposal. A year later, Vallone unsuccessfully pushed a bill prohibiting the city from naming its landmarks after living people.

Koch once called the renaming one of “the high points in my professional life.” In 2012, he was featured near the bridge in a video for Bloomberg’s State of the City address yelling, “Hey! Welcome to my bridge!”

Too bad this is all a publicity stunt to boost his BP candidacy.
Posted by Queens Crapper at 12:34 AM

Make hay while the sun shines.

And how come Van Bramer didn't do this? It's his district and he voted against the re-naming.

I'm very tired of having large pieces of infrastructure, decades after they've been built, being renamed after people who had nothing to do with their construction.

Between the new signage and extraneous expenses, millions of dollars are spent on nonsense like this. Even if the money is donated, what a waste! If someone really wants to honor someone, do something helpful like donate to a school or a hospital in that person's name.

Ever wonder what sort of a-hole stipulations Donald Trump might have in his will?

Anon: "Ever wonder what sort of a-hole stipulations Donald Trump might have in his will?"

You are right on with what your post stated.

Actually others came out against the naming of this bridge long before Vallone.

He stole their idea.

Because they had the temerity to exercise independent thought in his district, a thing he will not countenance, and he needed a grab credit for someone else's idea and wanted to shut them up, he cut off funding to them.

Vallone is a lowlife. He will make the perfect beep for Queens.

Vallone sticks to his guns on this one, and risks pissing off a lot of people. I don't often say it but good for him.

Doing the right thing for the wrong reasons.

Hey, junior Vallone--how about protecting our borough's historic sites and getting some MEANINGFUL municipal landmark designations for bereft Queens?

I know--you'd rather grandstand and fake concern.

I'll tell you what--I'd rather see the Queensboro Bridge bear Koch's name THAN YOU become our next borough president.

And tell your skeevy brother Paul, that we don't want him representing northeast Queens.

How's that for plain speaking?

What am I? Chopped liver?

Is this the guy that wants to make the Steinway Mansion a (gentlemen's?) "supper club" and is discouraging (as it is rumored) the public's efforts to save it for the community by working with the family to keep it closed and shuttered?

Every elected official in the area has come out for it but him - and as long as he is on the sidelines their efforts are tied.

Nice resume item for those that want to do something with preserving their community. All they need to do is go to Old Astoria to see the future of their community - a blot on our borough courtesy "lil Pete".

Manes and Shulman seems to be tied to sleaze, Marshall painful in her dotage.

Electing him will make our borough a laughing stock.

Doing the right thing for the wrong reasons.

I am totally blown away that this is even a thing. Are you fucking kidding me?! Who cares what the bridge is called?! It's pathetic that millions of dollars was wasted in new signage but is someone who was elected to serve the people of Queens actually stupid enough to think the people of Queens care about THE NAME OF A BRIDGE? How about you focus on things we need, like more affordable housing, safer / better public schools, etc? I would never vote for this asshole now because every minute he spends on this is a minute he's stealing from ACTUAL ISSUES.

I heard that Vallone wants to save Shea Stadium and the Trylon Theater next!