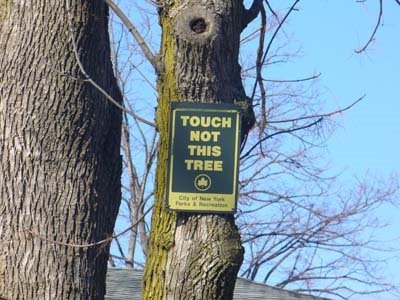 Since a 2010 law was passed requiring builders to pay the city for chopping down healthy trees planted on the public sidewalk, Staten Island homebuilders have claimed examples like Mr. Molino's — where the contractor is charged tens of thousands and even hundreds of thousands of dollars by the city for tree removal — are becoming more frequent and detrimental to their business.

"I'm a second-generation builder, and this has never been an issue until the past four years," said Frank Naso, president of the Naso Organization, which specializes in commercial and residential land development. "What's really happening is the Parks Department is devaluing [the future homes] on vacant land. The builder is eating the cost."

It seems counterintuitive that trees would have a negative effect on property values. But Mr. Naso sees little incentive in planting trees on vacant lots if a developer later must pay big sums to remove them to build on the land.

He is currently building two houses on Staten Island's North Shore that he hopes to sell for about $300,000 each. The city is asking him to pay $15,000 in restitution for trees that he says he needs to cut down to build. "If you pass that onto the homebuyer," Mr. Naso said, "you'd price them out."

But the flip side of debilitating costs carried by builders is that the Parks Department is attempting to put a monetary value on something as invaluable as a big, old tree. Mr. Molino's stately pin oak on Rudyard Street measured in with a diameter of 42 inches at "breast height," according to the city, which suggests an age of between 80 and 100 years. That made it rare: Less than 1% of the city's 592,130 street trees were that size or larger, according to a 2006 municipal tree census.

"Our No. 1 goal is to preserve and protect the urban forest of New York City," said Jeremy Barrick, deputy chief of forestry, horticulture and natural resources for the Parks Department. "Trees provide a benefit to the entire community. The way we protect those trees is by putting a replacement value on them that ultimately deters or makes it difficult to justify the removal of a tree. One three-inch [diameter] tree does not provide the same benefits in the here and now as a 42-inch tree."

Once a healthy tree has been deemed by Parks Department inspectors as an "unavoidable obstruction with construction," the city employs something called the trunk-formula method for calculating the value of the tree that must be removed and how to replace it. Factors scored on a scale include the tree's species and the condition of its trunk and foliage. Location is also a part of the math.

"We come up with a number of three-inch trees that are necessary to make up for that loss," Mr. Barrick said.

The city averages between 30 to 40 healthy-tree removals a year, Mr. Barrick said, and a handful of those cases have been challenged in court.

And this is why the developers just cut the trees down without permission. If Parks doesn't know ahead of time and can't measure the trees, there's no way they can adequately estimate the cost or the number of trees to replace them with. It probably costs less to pay a fine after the fact than to go through the permit process.
Posted by Queens Crapper at 12:16 AM

Flat fee per tree - no pity for mobbed-up developers on Garbage Island!

As to construction: Flood Zone. Has basement, which is surely under base flood elevation.

As to trees: Port Authority just axed multiple HUGE trees in Elm Park (indeed, the original Elm Park Elm trees!). So they're crapping out our air and removing one of the few mitigators of crappy air.

Parks is out of control - middle-management has been given way to much power and they're running amok. So are the developers - or, more correctly, people who want to make money.