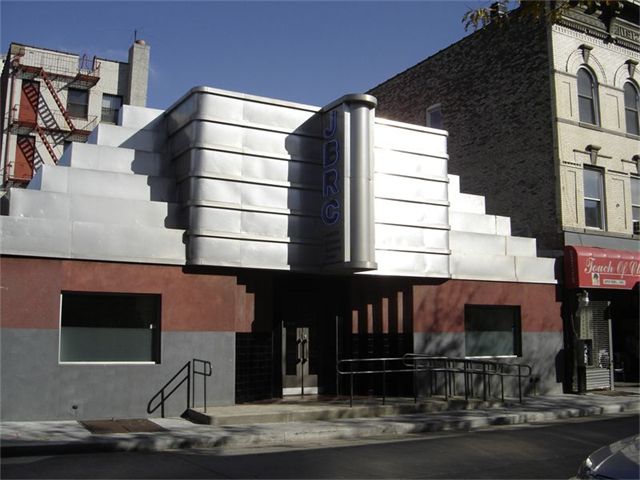 The building was formally the La Casina nightclub which opened in 1933 at the end of the Prohibition Era. The building, with its distinctive Streamlined Moderne style, was restored in 1994/1995 and became landmarked in early 1996. This property is one of only 68 individual landmarks in the entire borough of Queens, making it a truly unique prospect.

If landmarking is so bad, why do realtors use it as a selling point? And why would an organization like Greater Jamaica Development Corporation have pushed for the designation if landmarking actually hinders development as opponents always argue?
Posted by Queens Crapper at 12:13 AM

What!? No business for the Jamaica Business Resource Center?

Someone had better get after Katz and Vallone about this.

Be great to expose their outdated, discredited, attitudes on Landmarking in some public forum. In a debate someone should publicly throw in their face examples of their pointless destruction our borough's character and property values.

Soooo....who wants the delightful job of carrying the dynamite?

Taking them to town on this and having the papers describe their deer in a headlight response could move the cause of community preservation a decade forward in one evening.

Once they get elected you know the press would never make them look bad with issues like this so now is your chance Queens.

We already have Katz and Vallone on record opposing landmarking:

BP candidates Councilman Peter Vallone Jr. (D-Astoria) and Melinda Katz both felt the park needed protection but the LPC was not the best method.

“It would have been a long, arduous process and never would have been completed in time to affect these projects,” Vallone said. “Luckily, the City Council has the final say and I will fight to ensure no Queens parkland is ever given to a sheik for one dollar.”

“The landmarks process requires that a site not have been significantly altered in the last 30 years--which automatically disqualifies Flushing Meadows. But more importantly, communities need to have a seat of power when these decisions are made,” Katz said.

Katz is so full of bull. No alterations is not a requirement for landmarking. The only requirement is that the landmark be 30 years old or older.

What!? No business for the Jamaica Business Resource Center?

I pass it a few times a week as I go to get lunch in the Jamaica Market (aka Farmer's Market), which is across the street - I have never seen any activity at the JBRC. Few people probably even knew it existed. York College has a Small Business Development Center, and I would bet that more people from the community use the office at York.

Where is this located in Jamaica?

It is located right off of Jamaica Avenue, where the Burger King is. The address is 90-33 160th Street. The same street where they have the Farmer's Market and the Harvest Room. In fact it is right across from the Harvest Room.

Thank you. Years ago I remember going to the Jamaica Arena, for wrestling. No idea where that was. Worked on Sutphin, and had to drive down Merrick Rd. to Valley Stream. Worked for the famous N.Y. State Rent Commission.

The Jamaica Arena is a block up from the LIRR station, to the west of Sutphin Boulevard. It's still there, with a different name.

Anywhere in Manhattan, this would have been landmarked a decade ago.

It is landmarked. That was the point of the piece.