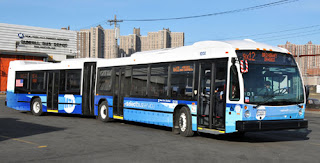 "After the city council's office of Queens read your blog piece about the noise created by the new long buses, and after additional prodding by a board president of a coop in Kew Gardens, and finally after CBS news appeared on the scene and threatened to run a story, the screeching buses traveling down Lefferts Blvd seem to have been replaced (or their brake systems repaired). The problem with these long, so-called "flexible" or "accordion-like" buses has thus mainly been resolved. Thanks to the intervention of Koslowitz's office, the media, and concerned citizens. It seems there is only one bus now that screeches somewhat, and the MTA should address that last bit of the problem, lest they receive continued complaints. This writer will be monitoring the situation carefully and reporting back if the bus screeching resumes to unacceptable levels." - anonymous
Posted by Queens Crapper at 12:45 AM