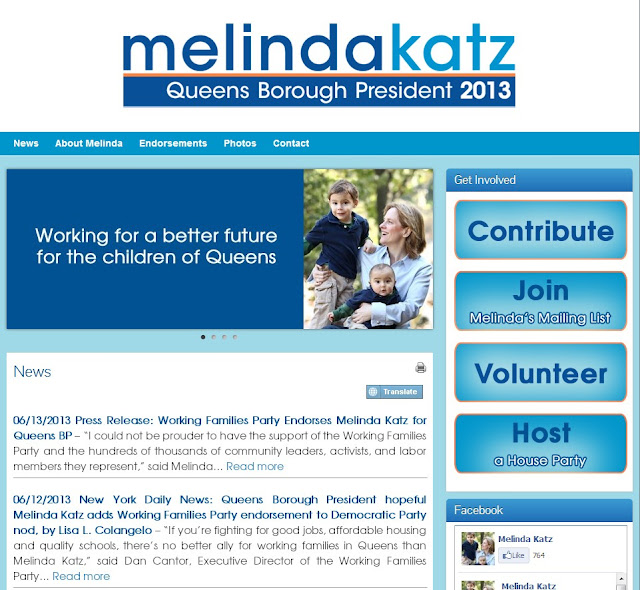 The first thing you notice when you go to melindakatz.com is that her "news" hasn't been updated in more than a month and apparently her children haven't grown either. The older one is 5 and the younger one is 2, but you wouldn't know it from that photo. 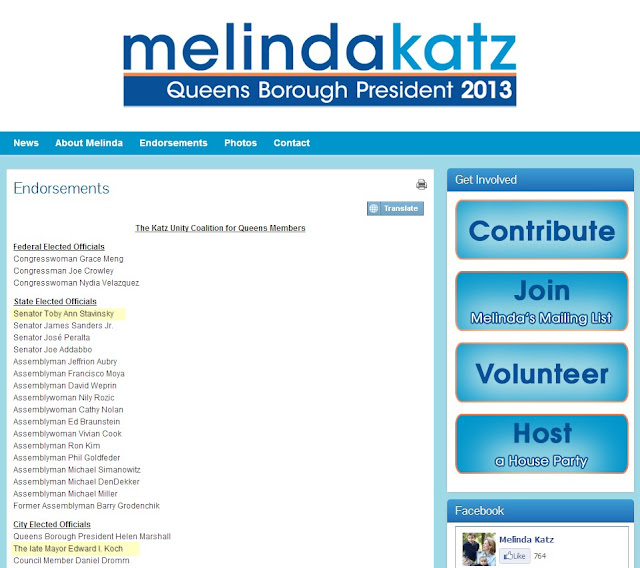 You'd think the County candidate would have the resources to hire someone that knows that the Senator's name is spelled Toby Ann Stavisky, not Stavinsky. Pretty impressive that she got Ed Koch to endorse her, but he's now deceased. Bragging about the endorsement of a dead man? Really, this woman has NO shame whatsoever. 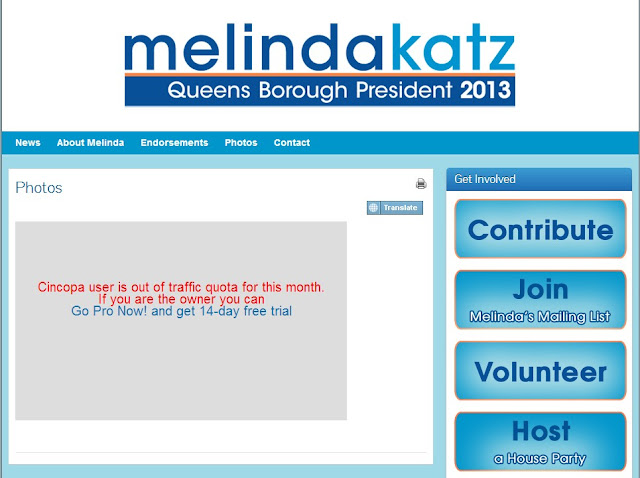 I like the fact that her campaign is also too cheap to pay for photo hosting.

My favorite line from her bio: "In 2009, Melinda was the only woman running in the Democratic primary for New York City Comptroller." Now there's a qualification.

These are the things you have to highlight when you spent your political career harming the borough instead of helping. Not one constituent or civic endorsement appears on the page.

Actually, this unprofessional woman is the absolute perfect choice to represent modern-day Queens.
Posted by Queens Crapper at 12:59 AM

So disconnected from reality and so self-serving.
God save Queens if she wins.

Melinda Katz would be even more damaging to Queens than the idiot, Helen Marshall, that we have in office.

TONY AVELLA for Queens Borough President, anyone else, more destruction of Queens.

If your a developer or don't care about Queens. Vote for Melinda Katz. If you care about Queens and want change for the better PLEASE vote for Avella,
From experience I can tell you that Avella puts on a good act and has proven himself many times over. I didn't vote for him originally when he ran for State Senator. But he gets my vote now and forever.

compare ... she is so entitled she is not even trying - and the Vallones - which are hustling - will take everything you dislike in pols to a new level. You do not know what poison a pol can bring until they are in.

Some choice Queens has.

Not one constituent or civic endorsement appears on the page.

Hmm, I'm surprised that Alan Hevesi hasn't endorsed her, after she enthusiastically served under him in many positions over the years...

With all Ed Koch dumped on Queens, borough residents would be stupid to vote for her.

Katz is the worst kind of politician and human being. She will sell you out for a nickel and her soul for a vote. Vote for Tony , please!

Didn't Ed Koch endorse Donald Mannes back in the day?

Katz is in it for the salary. Once she wins, she is nowhere to be found.

I find it strange that her little bastards aren't wearing red berets.

I find it strange some putz would pick on her children.

She is desperate for a city paycheck. How else could she afford Curtis?

"I find it strange some putz would pick on her children. Wait, no I don't."

I find it strange that some putz would fail to understand that the candidate was being criticized for making it seem that her children are younger than they are. Wait, no I don't.

You would have to ask Curtis Sliwa and Melinda Katz why she chose to conceive using Sliwa's sperm while he was married to someone else and was raising a son with his third wife.

You would have to ask Melinda Katz why she has chosen to use a photo that's a year or two old in her 2013 campaign.

What about Wife No. 3 lawsuit? Google it - very interesting

YES BUT AS HER COMPETITION IS THE LOWLIFE VALLONES I WOULD SETTLE FOR A DITZ BEFORE A TWO-BITS.

"I find it strange some putz would pick on her children."

Typical response from someone who doesn't have their brain in gear.
ANYONE who uses their children as advertising props deserves to be criticized and avoided like the plague.

Children are the ultimate gifts of life and should be cherished, adored and protected. However, we have politicians (Katz, Crowley, Vallone, etc.) and business people (Judy Markowitz, Folan, etc.) who believe their offspring are to be propped up in front of the camera in order to boost votes and sales. What difference does it make that the child really doesn't have a say in this marketing ploy. A child in a fancy photo will not make me feel that the parent is good at what they do unless it an ad for procreation. Give me the facts, results, accomplishments so that I my make a sound decision whether it be voting for an elected representative or choosing a person to conduct business with. Using one's child in an advertisement is an insult to those the ad is aimed at. Those who use their kids basically aren't respecting their constituents or potential customers. It is part of the dumbing down of our population, appealing to the lowest common denominator.

Using a child in an advertising or election campaign is nothing short of child abuse.

And as for the Katz children being bastards, read this: A bastard is a child born out of wedlock. Katz's offspring are exactly that.

VOTE FOR THE DITZ
NOT THE 2 BITZ

yeah, how come Curtis (I'm from a media whore family) Sliwa isn't in the photographs of his child?

Check out the photo of Sliwa with Katz and the kids here. But please read the accompanying article on an empty stomach. You may want to retch.

Hope you Queens voters are following Georgetheatheist advice and get your minds out of never, never land.