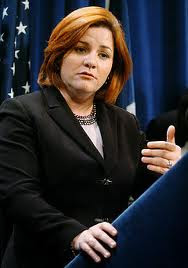 New York City plans to spend $18 million over the next two years to help immigrants who came to the United States illegally as children land legal jobs and get driver’s licenses.
City Council Speaker Christine Quinn — flexing the power of her office in the midst of a tough election fight as she runs for mayor — will announce the effort Wednesday.

It’s geared toward helping more young New Yorkers qualify for President Barack Obama’s year-old Deferred Action for Childhood Arrivals initiative, which lets undocumented immigrants who came the U.S. before age 16 and were younger than 31 on June 15, 2012, get driver’s licenses and Social Security cards.

As many as 79,000 New Yorkers meet the age and immigration requirements for the program, Quinn says, but as many as 16,000 of them could be disqualified because the strict program requires applicants to have graduated from high school, earned a GED or be currently working toward a diploma.

The $18 million from the City Council will fund adult education classes and GED programs for people who need help meeting the education requirements.

Why do we need to help adults? I thought they were supposed to be welcomed because they were here "doing the jobs Americans won't do?" Haven't we heard that they and their kids are all successful and contribute positively to the economy?

What school or park is falling apart and could have used $18M?
Posted by Queens Crapper at 12:36 AM

You can't argue with logic, but this is a panicky Quinn going after the Hispanic vote. She has a race on her hands now. What do you think Anthony?

Bowne Park - it's filthy and there's a new dead animal every day!

The American vs. non American isn't the issue.

There is an unspoken and rising hatred brewing between minorities who are gainfully employed/moderately successful and those who are not. Even in the same ethnic group. And there 'aint nothing the "progressive" NYC politicos can do to stop it playing out.

Kissing up to the immigrant vote?
That's gonna be her downfall!

you stand around while your taxes are channeled into tweeding by those who know your vote is in their pocket so they pretty much can do anything the hell they want.

My friends a NYC school teacher she must "pass them" or get "messed with" by the system.
A good 1/2 females are pregnant by age 17 they never work get welfare, free medical and "hook" on the side. (why would they wanna work ?)
The males steal, hustle and sell drugs for a living. YOU CANT give them drivers licenses because many are alcoholics who will kill people and drive with defaulted insurance for "non payment" !!
Its like in a 3rd world country !!

Why do we reward people for being here illegally? Lets use that 18 million and pay some immigration officers to come to the city and start rounding up the illegals and deporting them. We would save so much money if we start doing that.

Ha! The race is over for her.

The next mayor is Weiner and the next comptroller is Spitzer.

I wasn't around for the first John Lindsay administration, but I can't wait for the successor that's coming soon. New and improved: now with social media!

You realize you answered your own question. The reason why they need help with the education aspect is precisely because they take the jobs Americans don't want. Those jobs don't require a formal education, pay shit, and so they never got a GED.

My point was why we should help them get a GED so they can compete against Americans for jobs.

The Catholic church and groups like La-Raza do the same thing. The hold "how to get over" classes in schools, basements and public library's

Why should OUR taxes be used to help illegals?

No amnesty for illegals! No help for immigrants, legal and illegal! Let them help themselves just like other immigrants that came here many years before them!!