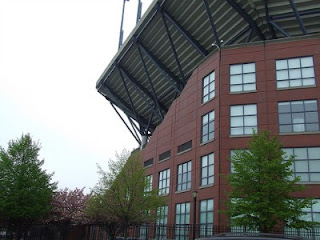 The USTA had no immediate comment, but according to Councilwoman Julissa Ferreras and New Yorkers for Parks, who have been working to secure a funding agreement, the U.S. Open organizer has promised $10.05 million for the park.

That funding will help underwrite the creation of a public-private partnership to help maintain the park, similar in function (if not in scale) to the Central Park Conservancy and Prospect Park Alliance. The USTA will sit on its board.

“In a city where outer-borough parks have been consistently shortchanged, today’s announcement represents a major step forward. I congratulate Council Member Julissa Ferreras for securing an ongoing and increased commitment from the United States Tennis Association to help fund park maintenance and upgrades at Flushing Meadows Corona Park, and for laying the foundation for a new conservancy that will help improve Queens’ crown jewel park for years to come. We must ensure that whenever private interests lease or use city parkland, those parks receive sustained and substantial funding in return.”

Sustained? Substantial? Why do we need a new conservancy, when we already have the Flushing Meadows-Corona Park Conservancy? Especially since part of the park was recently named after its late former president, Pat Dolan? So the USTA can dictate that the money be used on the tennis courts they're not really giving up and flowers outside their new stadiums?

“This will be a win-win partnership,” said park advocate Will Sweeney, who bitterly opposed the expansion until the USTA made the $10 million contribution. “The investment can lead to Flushing Meadows-Corona finally reaching its potential as a world class park.”

A win for the phony park advocates!

But not everyone was a fan of the revised deal.

And what happens after 23 years? They sell off more of the park to another billion dollar corporation?

The final City Council vote was 47-1. The only person to not vote in favor was - Dan Halloran!
Posted by Queens Crapper at 1:07 AM

This is what happens when the politicians know that they will be reelected no matter what they do.

As long as you bow and scrape every time they walk into a room, or let them seduce you with some ice cream money to do their dirty work for them to silence a dissent you all pretty much get what you deserve.

I bet (fill in the $ amount - any dollar amount) you will forget about this before next Thursday lunch.

End of story. Move on. There is nothing for you to see here.

There goes my POSSIBLE vote for Di Blasio as a "choice" of desperation.
I just flushed it down the toilet.

Now I'm DEFiNITELY not voting FOR ANYONE for mayor--and Bill can join the rest of the "effluent" (turds, crap, doo-doo, whatever) floating in the river!

Because the real estate industry OWNS the politicians--bought and paid for by campaign donations.

I might sit this primary out--except for Avella & Graziano--the only straight shooting runners that I believe in.

Therefore, I will vote for them.
I donated to both their campaigns, and my money's on them winning.

Chump change buys a chump!
Did the USTA contribute $$$$$$ to Bill's war chest?

According to Clare - the worst reporter in the city - Trapasso - Will Sweeney bitterly opposed the USTA expansion - he did?? When did he do that. We must of all missed that one. Where or how did she come up with that one. Sweeny's equally ignorant comment regarding the how this paltry "investment" will lead to Flushing Meadows park finally reaching its potential as a world class park is proof enough. What a joke.

And while we are on that subject since when has Will Sweeney been referred to a s park advocate. Just curious.

Very dumb of DeBlasio. Was he hoodwinked or bought?

The major media outlets just gloss over this shit. The NY Times did a puff piece on it where they polish the balls of all involved, and leave one line at the end about Dan stating he's 'from another district' - as if people from one district never visit parks in other districts.