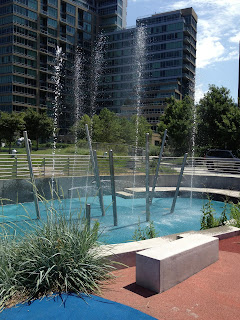 Many Long Island City parents were excited last week when the sprinkler system at Gantry Plaza State Park was finally repaired and their children could finally run under the water keep cool.

But that initial joy that the “Rainbow Park” sprinkler provided was short lived. The sprinkler broke after 2 ½ days of operation.

“The sprinkler was damaged after Superstorm Sandy and it required a big stink for it to even come on last week,” said Kris Schrey, the head of the Long Island City Parents Group. “Now we are battling for it to be repaired yet again.”

The system’s design is the source of the problem. The designers, in a quest to be environmentally conscious, shied away from a regular system where the water would have run off into East River.

Instead they adopted a system that recycles the existing water through a filter (with chlorine), much like a swimming pool. “Unfortunately, this is an expensive, fragile and error prone system,” Schrey said.

The system also requires two employees to operate it. One employee has to monitor the chlorine levels every hour, while the other handles health & safety issues.

Translation: It takes 2 park employees to hose down yuppie spawn in LIC.
Posted by Queens Crapper at 12:32 AM

Adult yuppies wet down at the local bars.

Why not imitate the working class just for fun?
Dunk your kids in the bathtub for a nice summer cool down.

No, they can't bring their I-pads in the water.

Lets introduce to the world of Queens Crap a new member to our little world: the LIC Parents Group.

The Long Island City Parent’s Group has come up with an interesting proposal for LIC landmark 5 Pointz, the graffiti-covered warehouse its owners plan to demolish, although it’s still unclear what’s going up in its place. The group is proposing that artists bring their graffiti to “the bare grey walls” around P.S. 1, and, well, stop fighting to save the 5 Pointz building altogether. Here’s a good chunk of what they said in their most recent email newsletter:

Was it really necessary that angry activists stop an environmentally conscious developer from building more space for people with jobs, incomes, degrees, and families? Can’t the graffiti move diagonally across the street right onto the walls of another art-friendly building owner, our own MOMA’s P.S. 1? The bare grey walls surrounding P.S. 1 like a proto-Reaganesque Cold War bunker would provide tens of thousands of square feet unadorned by windows and stairs. The hundreds of running feet of concrete walls along Jackson Avenue and 46th Avenue are highly visible to all folks who track to Queens to experience modern art, munch in the M.Wells-managed school cafeteria, and dance (or mostly hang out) at the sultry warm-up parties. Could there be a better synergy than between MOMA’s high concept art and mind-numbing street art of the aerosol kind?
Advice to aerosol activists: advocate as aggressively for the right to splash, splatter, and spray onto the MOMA-walls as you agitated against the development plans. This “concrete” solution would provide a new, better, lasting home for your graffiti: more space, more visibility, more foot traffic and maybe the museum could even carve out some office space for Jonathan Cohen’s graffiti group?
No sane developer will let artists into a building after what happened to the Wolkoff family. They were generous (and a bit clever) by parceling up brittle floors with drafty windows into artist studios and renting the spaces at rates that few real businesses would be willing to pay. But no good deed goes unpunished and the graffiti activists who had used the building facade for free are now paying back their benefactors by blocking the plans and appropriating the building.
I personally know half a dozen owners of commercial loft spaces in Long Island City who will rent to everybody but artists. After what happened to David Wolkoff there will be more.

It was no secret that while nursery school drywall that was underwater was being ripped out after the storm the parents were taking their little tykes out on a precious Halloween Parade.

Question to LIC Parents: how does it feel to raise your kids in this location?

Um... do you even know that you are exposing your kids to this environment?

What are going to do about it? Worry about your real estate investment?

Was the St Mary Senior Center shut down so that Yuppie Spawn can have their little fountain?

Back to the topic. Why wasn't this fragile, difficult and expensive to maintain design detected in the design phase? It's the government.

"Yuppie Spawn" - love it. Thing is Yuppies are, by definition, self centered, so the "spawn" are actually accessories, not an effort to form the next generation of human-kind. That explains the devil-may-care exposure of the spawn to toxins.

Back to the topic. Why wasn't this fragile, difficult and expensive to maintain design detected in the design phase? It's the government.
------------------
Look at that multimillion dollar jungle that Dutch Kills Green has become.

Look at the law suits on the design of Queens Plaza

Look how any charm and interest in the area is being bulldozed into oblivion.

Look at the ugly thin walled buildings that are not selling well and about to have a blizzard of new units dumped into the market.

Whoever is responsible for this travesty of city design should be voted out of office and in city planning should be sent to North Dakota to design jug handles for traffic.

All this to pay off campaign donations from developers.

The pols are pissing away the hard earned money of people who trusted them.

Unless you are part of this process you are marginalized, your community institutions starved for money. Like the Indians, you are to follow the script given to you - just disappear.

We will soon have a fake community of fake buildings filled with fake people.

And once the word gets out to the self-indulgent hipsters about the area's lethal past, you will be hard pressed to make this barracks for drones serving the Manhattan cosmopolitan elites.

This is what the parents deserve.

"""Why wasn't this fragile, difficult and expensive to maintain design detected in the design phase?"""

It was made that way (like many things) to give "union sons" big job's.
To hell with everybody else !!!
---And THATS WHY you have a huge rotting structure in Flushing meadow park.
Nobodys is going to spend $80 million dollars on a restoration only to have the local dirty pols decide who gets hired and who gets "shut out" of YOUR project


It was made that way (like many things) to give "union sons" big job's.

I'm more inclined to think the problem lies with these fancy out-of-town designers - looks good on paper, but the reality? feh.

Even NOT broken the system was designed to needs 1 employee to monitor hourly chlorine levels and a 2nd backup worker to "watch" the 1st guy. --allegedly "to insure health & safety issues" hahahahah :) :)

What the hell were these morons who gave the green light on this project thinking ?
This must cost $700 a day in salary's to operate.
What a sweet $$$$ gig for 2 VERY lucky people !!
The job could have been done with a cheap computer tied to a network for monitoring and injecting chlorine---but no some people wont like that !!!

Wholesale displacement of a population of American citizens because they do not fit some artificial criteria set by special privileged interests that has determined that their very presence makes their community under utilized.

All orchestrated by someone who lives in Washington DC and works in Congress .... this is happening within sight of the United Nations.

Take note of American Democracy that is trumpeted to the World!

PS And they are paying for it from their taxes!