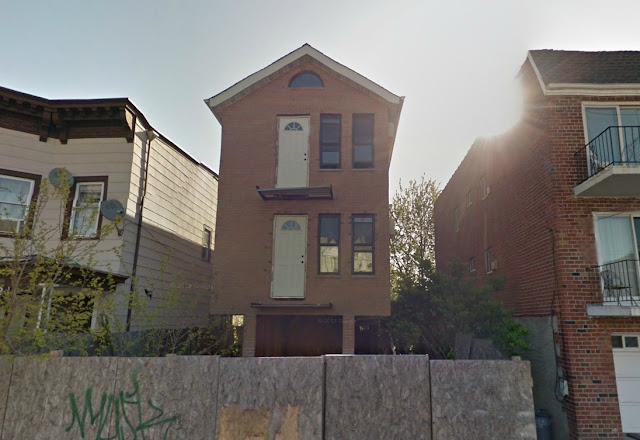 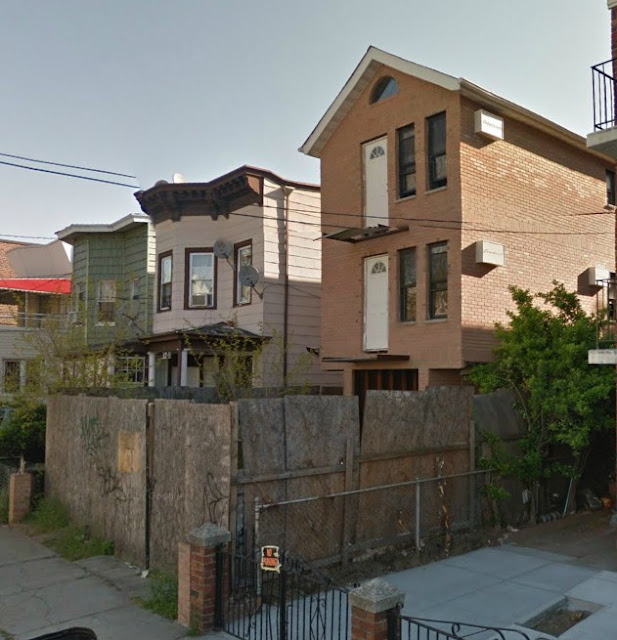 Now here's a real architectural abortion: 32-15 60th Street, Woodside. Permits were filed in 2006 to build a 2-family house, but things went awry and those permits were revoked in 2007. The house has sat basically abandoned with a stop work order since 2010 and had a complaint filed in 2011 that it was open and unguarded with people (squatters?) entering and exiting. Lord knows if they ever resolved the little electrical problem they had. And what's with that open foundation? The house looks like it's on stilts.

This was previously a driveway/side yard.

The same owner apparently owns the house next door which currently has a yet-to-be-answered complaint of illegal conversion. The previous owner was tagged in 2006 for the same violation.
Posted by Queens Crapper at 12:45 AM

This house should be a prototype for the city to use when building in flood zones.

It is baffling at times, that the so called "greatest city in the world" allows so much of this type of crap to go on, destruction of neighborhoods, tons of illegal conversions, garbage all over, the huge amount of cutting down trees, paving over everything that is green, the list goes on and on.

It's craptastic! What a shithole!

A reading from The Gospel, according to Bloomberg:

As long as the Manhattan tourist corridor remains a pristine attraction, galloping roughshod over Queens is acceptable. Over development is a boon to the borough.

The ruination of all outer borough neighborhoods, not only puts money into political coffers. It fills our bank accounts 'til they runneth over.

And this is all good. Thus sayeth the Lord Developers.

Akeen B. Shekoni, that's who! Stop work, "job on hold", in audit, notice of intent to revoke (from April, fer gawds sake! - normally, if things aren't responded to in 10 days that's it: permits revoked).

In the past year he's mostly self-certified; filed 6 New Building apps, and has two applications "on hold".

There you have it.

So Curbed linked to my post but took the extra step of looking up the architect. Needless to say, this one is not featured in his portfolio.

Answer: Someone who has either done a lot of drugs in the past or spent way too much time playing with Legos as a child.

So Curbed linked to my post but took the extra step of looking up the architect. Needless to say, this one is not featured in his portfolio.


...yeah, but I did take a look at the portfolio itself. I wouldn't be putting those pictures up as representative of my work if I were them - they are FUBUGLY!

That is not a home or a house.

It is a warehouse.

Not bad for a borough that at one time boasted the largest model housing and planned communities in the nation.

Watch out for that first step ... it's a doozy.

Although it is not necessarily the reason (or excuse) in this case, I have heard that some architects circumvent zoning regulations on the number of stories and/or height of the house by using the first floor as a garage - they then say that the house is not three stories, it is only two stories, because the first floor is not a living space. That's why some "two story" houses tower over the neighboring houses. But in this case, the house doesn't appear to be much taller than the neighboring ones.

Them stilts is for hurricanes

Once they put up 6 satellite antennas, people will never notice the difference. It will look like everything else in Queens.

"they then say that the house is not three stories, it is only two stories"
--------------------
Yup exactly !
On Stilts to make 5 or 6 parking spaces at $450 a month each near the train PLUS what looks like 4 Shanghai barracks above.
--Speculative building.
That cheap slap up CAD shitbox can pay itself off real quick then bring in $9000 a month.
Fines and bribes are nothing compared to the $$ gains.

BTW: You no longer need 6 satellite dishes. CPU speeds on new switchers, LNA's and multiplexers are so fast you can run over 6 top boxes independently off one dish.

The DOB notice to revoke in April 2007 because of some problems in this project. But until now nothing has been resolved and the permits are still not revoked.

Both of the contractor and the architect of record are known as professionals to cover other unlicensed.

Woodside is one of the god-awful ugliest and most depressing neighborhoods I have ever had the misfortune to be in - so I'm not surprised.