Bloomberg lets slip that FMCP soccer stadium is off the table 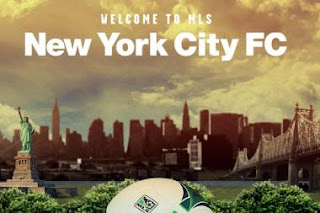 It has yet to be officially announced where New York City F.C. will call home when the new Major League Soccer franchise begins play in 2015.

But the mayor casually revealed that Yankee Stadium will be the home for the new soccer team during his weekly radio address Sunday touting New York's status as a "global sports mecca" ahead of this week's MLB All-Star Game.

"Just look at our three newest sports arenas: the new Yankee Stadium; the Barclays Center, home of the Brooklyn Nets; and the Mets' home base, Citi Field. Each pumps millions of dollars into our economy with every game they host. And each venue is gearing up to play an even bigger role in our city’s economy,” said Bloomberg, according to a transcript that was amended roughly one hour after it was posted on his website.

"Yankee Stadium will become the home of the New York City Football Club, the first soccer club in the five boroughs since the 1970s," Bloomberg said. "Barclays will add the New York Islanders to its roster in 2015. And, of course, Citi Field is hosting Tuesday’s All-Star Game.”

A Google cache version of the transcript page reveals Bloomberg's original remarks, which did not indicate whether the team would play at Yankee Stadium on a temporary or permanent basis.

Julie Wood, a spokesperson for the mayor, characterized Bloomberg's original remarks as an overstatement.
Posted by Queens Crapper at 12:29 AM

"Each pumps millions of dollars into our economy with every game they host."

I'm sure if you ask the businesses surrounding these venues you will find that not too many crumbs fall their way.

What exactly does that money get pumped into at Shitty Field? Oh yeh - the Wilpons' pockets! And those of the overpaid morons playing the games. You know the workers at Shitty Field get paid shit and receive no benefits!

If people did actually go out after a game we might have a decent restaurant in Queens, not just industrial food diners, chains and faux pubs (the ethnic places are great but often have zilch ambiance).

Once the noise from the FMCP supporters quiets, which will be soon, Soccer sycophants and Bloomberg devotees will resurrect this plan.

Remember, Bloomberg got beat on the West Side football stadium by the suave Manhattanites. He will not go down a second time especially to the uncouth bridge and tunnel crowd.

From The NY Times on Tuesday:

“Yankee Stadium will become the home of the New York City Football Club, the first soccer club in the five boroughs since the 1970s,” Bloomberg said in an address that detailed the quality of the city’s professional sports scene.

After the line raised questions and discussion among soccer fans, the mayor’s office issued a correction Monday indicating that Bloomberg — reading an address prepared for him by staff members — was mistaken.

“The script for the mayor’s radio address on Sunday overstated the possibility that the New York Football Club could play some games at Yankee Stadium while they search for a permanent home,” Julie Wood, the deputy press secretary, said. “No decision has been made on where they will play. Wherever they end up, we are thrilled to welcome Major League Soccer to New York City, where pro sports are creating jobs and pumping millions into our economy.”

Look out Flushing Meadows. Be vigilant! These pukey politicians will lie, misstate, obfuscate, cloud and conceal their true intentions in order to get their way.

Bloomberg wants a legacy and will not let a bunch of Queens residents stifle his selfish goal.

An IMPORTANT restrospective perspective from 2004:

Thanks for posting the video from 9 years ago. How interesting to see the hypocrisy of Bloomberg's administration clearly laid out. For example, he says' "This city cannot build the schools, expand the libraries, fix the potholes, and build large sports facilities at this time. So what happened? Shea and Yankees Stadiums were replaced and the people at Willets Point still have potholes and little else. The landowners' taxes were stolen! Bring in the Feds!!!

"Shea and Yankee Stadiums don't make any money for this city...they're disasters for the city."

"Each pumps millions of dollars into our economy with every game they host."