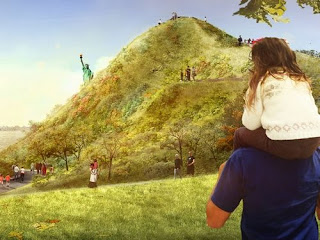 Mayor Michael Bloomberg officially broke ground on The Hills on Thursday and said a total of $36 million had been raised to build the park that will be made from recycled construction and fill materials.

The Trust for Governors Island, the nonprofit that runs the former military base now owned by the city, will need to raise a total of $70 million for The Hills. The park will rise from 25 feet to 80 feet above sea level and at its highest point will provide visitors with a 360-degree panorama of the Statue of Liberty, New York Harbor and lower Manhattan's skyline.

In addition to the Schmidts' gift, donations have been pledged by Bloomberg Philanthropies, the Carson Family Charitable Trust, Charina Endowment Fund, the Lauder Foundation, Joan H. Tisch and family and the Tiffany & Co. Foundation.

In a statement, Mr. Bloomberg called Governors Island "at the center of our administration's efforts to revitalize our waterfront and create new and innovative green spaces along the water's edge." He predicted that construction of The Hills "will create a landmark in New York Harbor that will be enjoyed for generations to come."

Manhattan gets the best of everything. Queens gets squat!

Queens only gets squat if you don't count LIC and Astoria. They get plenty, But, then again, they are just an extension of Manhattan.

Eric Schmidt, the same guy who also allegedly has "a sprawling $15 million penthouse at 31 W. 21st St." so he can keep his womanizing secret: